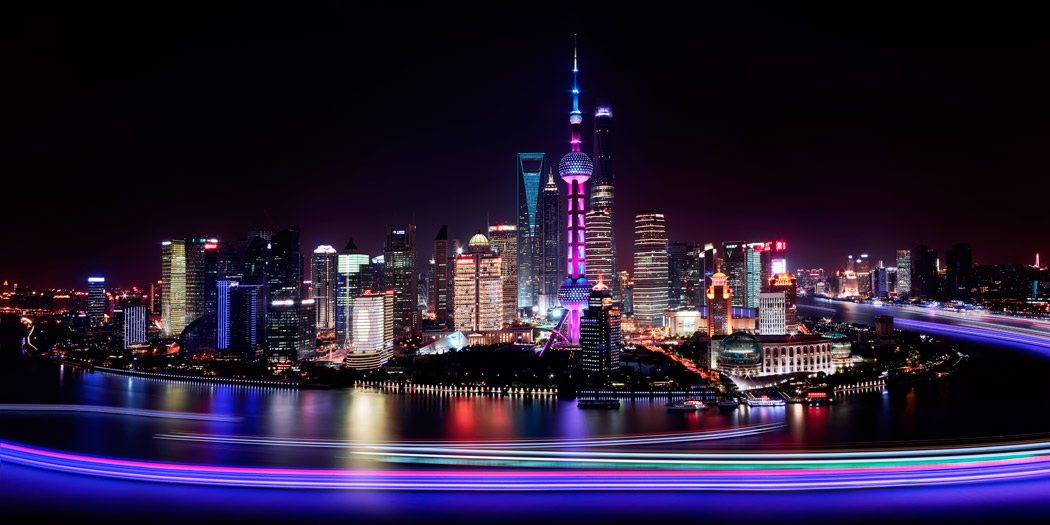 Well, that’s it! After 3 long years being based in Shanghai, this is one of the last images I captured of this amazing skyline.

In the illuminated cityscapes I’ve now shot so many times, it’s easy to forget about all the problems, issues, health effects and frustrations that come as a downside to living in such a rapidly expanding metropolis – at least the view’s amazing! But stood on top of yet another amazing rooftop location, I had time to think back and remember my time in the city with mixed feelings.

Packing up your apartment into a shipping container after 3 years is one heck of a job – a task that works a lot better when you live in a country where manual labour is still (relatively) cheap. It turns out that “moving house” in Shanghai is another phrase for “order a swarm of packers and cleaners who will be in and out of your, now empty, apartment before lunchtime”. Evidently the 3 years I’ve now spent in one place is enough to turn me into a hoarder, with box after box of things we hadn’t actually seen since first arriving in the country – note to self, pack lighter next time. 😉

But that was it: Time to say goodbye to our home in JingAn. No apartment in Shanghai is ever perfect – in a city where construction happens 24 hours a day and communication is “challenging” at the best of times, even if you do speak the language(!), things just often fail to get done. But for all its quirks, it’s been home to me for one of the longest periods I’ve spent in one place in my life.

On to the absolutely stunning Shangri-La hotel, for a few nights while our passports were held for customs processing (yes, China still has laws where you can’t check in to a hotel / residence / phonebox without informing the local police station of your whereabouts!). Part of me is embarrassed by the fact we needed 3 cars to get our luggage to the airport (on top of the container contents!), but there’s a little bit of me that still chuckles when I think back to the hotel staff’s faces when they saw the motorcade arrive for us that morning… 😉

Naturally, the most frustrating airport in the world (Shanghai PuDong) couldn’t let me go without one final painful experience. Having checked in our 10 huge bits of luggage and 4 cabin bags, it was only to be expected that I would have to waste a huge part of the morning in the security office while they used calculators to work out if a flash battery was allowed onboard… Still, onwards and  upwards, time to get on Virgin Atlantic’s shiny new plane (which is a little annoying, having spent the past 3 years travelling on their knackered old ones!) for the final one-way flight back home to London.

So, now safely back in the clean air of the UK’s south coast, what will I miss about Shanghai?

Quite a lot, actually…!

I’ll miss Bob, my driver, who was with me for the entire 3 years, informing me of the expected weather each day simply through what he was wearing. Granted, a lot of the time, I’m sure it was me going where he wanted – not the other way around – but he’s also been there on every rooftop visit and “stake out” we did over the whole time I was there!

I’ll miss Roy, at my printing studio. While I’ll still be sending images to him to print – I will no longer be sitting and chatting for hours about what’s going on with the photographic industry while waiting to see how a large-format plexi image would appear.

The random street scenes, that you just don’t get in the west, are now in my past; the guy there (on the left) making “antique” suitcases to sell, openly in the street; the “official” FedEx/DHL vans who have an interesting way of looking after their parcels; the temples stuck in between 6-lane roads, a Burger King and huge skyscrapers; the crazy camera shop guy who can fix any camera in 30 minutes; or even the hole-in-the-wall shop which has more hardware in stock than the largest Home Depot or B&Q combined.

While frustrating at times, I’ll miss the crazy interpretations and translations of English words and phrases. Granted, I won’t miss trying to work out what the Chinese characters for “please, just wash my damn jeans?” are on a washing machine, but the experience (I’m told) will of course have made me stronger… 😉

I’ll miss the rooftop shooting – in a city with so many high places, these are some of the images that helped define my cityscape photography. In a place where anything is possible (with the right contacts or money), it’s a million times easier to get to where you want for photography than most other places I know in the world.

I’ll miss the random weekends – like going to a water town, or a strange “copy” of England just outside the city, or dumpling making class. When you’re in Shanghai, “popping down to Hong Kong” for a night or two, or even “hopping across to Tokyo” never needed a second thought before booking.

Will I miss the food? In a word, NO. Eating parts of a donkey I don’t want to remember, spicy and smoked screaming frogs, live shrimp, duck tongues, thousand year eggs, chicken feet, duck head, water snails and a pink dish that I still don’t know the contents of is enough to put you off mealtimes for a while. But, these were also the times I spent with some great friends in fantastic places around the country – so I have to remember them fondly. Hey, at the very least, a “bush-tucker-trial” would no longer worry me… 😉

This is the city where “KTV” can mean an extravagant karaoke party venue (and they really are extravagant!) or a form of dark and dingy brothel; where there is a big difference between a “massage” and a “massaGEE”; where you come home to find alien tentacles in your refrigerator (which turn out to be aloe-vera leaves?!); where everything needs to be “chopped” (stamped); where having a baby means you need to give colleagues inappropriate chocolates and vacuum-packed eggs; where mosquitos are capable of inflicting pain worse than having your finger-nails removed; where the local bar’s best selling “healthy western wrap” is called a “fat bitch”. Yes, this is a place of weird things…

…but in some way, I’ll always love it for its quirks.

You’ll find hotels who “know” you well enough to fill your mini-bar up with unlimited supplies of your favourite drink. The urban planning center is a sight to see – a complete scale model of the entire Shanghai area that you can walk around. You’re in a city where there are hot-tubs on the rooftops of nightclubs – and a place where they have three of the world’s tallest buildings within a single 500m square of land.

I’ll miss the TaoBao parcels arriving, full of amazing things you can buy for pennies and get delivered the same day; the crazy photo setups with more gigawatts than The Doc needed to send Marty back in time; the awesome light shows and parades (if you can get near them!) during holiday times; the high speed train services which are never late and are more like an International Business Class product on a plane; oh, and my favourite little Chinese restaurant across the street from me : “Fortune Cookie”.

When you leave a country, it’s natural to look back with fond memories – but let’s also not forget one of the downsides of operating in one of the most rapidly developing cities : the deadly air pollution. 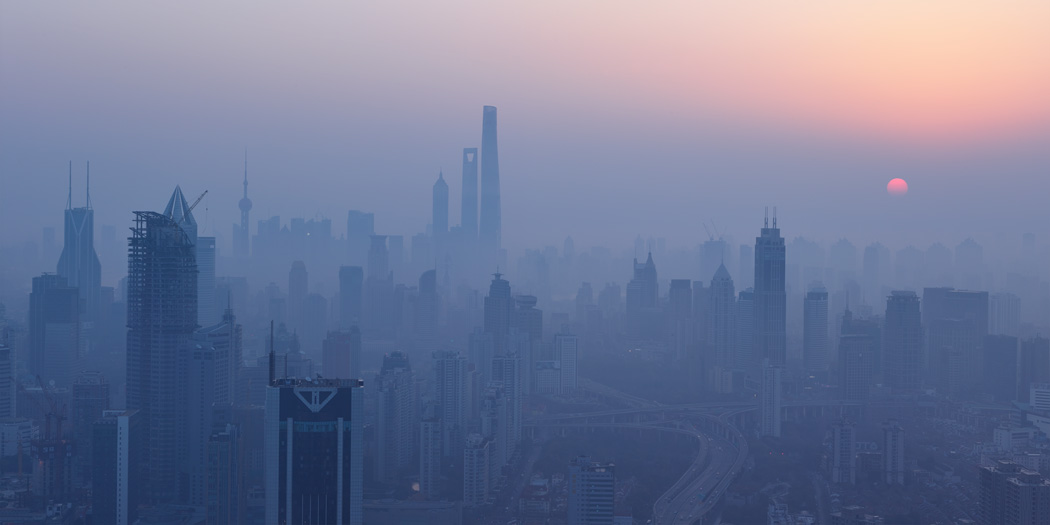 Yes, that sunrise above is “normal” when you live in Shanghai, as well as other parts of China. The sun “rises” about 10 degrees above the horizon, simply because it has to get to that angle in order to break through the thick, carcinogenic clouds of smog that factories are kicking into the atmosphere.

I remember once finding the masks that people wore on the street amusing – let’s be honest, you can’t help but look funny in them. But 6 months into living there, I owned many of my own – along with air purifiers to keep our “bubble” of clean air alive in our apartment.

While countries such as Malaysia and Singapore are struggling with a similar problem right now, at least their governments and people are angry about what is happening to their air. In Shanghai, this way of life has sadly just become accepted and normal.  It’s so weird living in that state of mind – this is a city where if WiFi was down for an hour, people would be shouting and screaming – but the air that keeps them alive being so dirty that it damages health with every breath? No worries…!

Such is the price of progress, I guess. 🙁

While Shanghai is a city that I believe everyone should visit at some point in their life (it really is spectacular to see), the pollution was one of the largest factors in the decision to leave. Imagine waking up to check the AQI rating, instead of the weather, before going outdoors! Definitely time to get out before my brain stopped thinking that was fundamentally wrong.

So, Shanghai – it’s been GREAT, it truly has, but it’s time to move on.

You’ve given me some of the most amazing experiences, biggest challenges, funniest moments and once-in-a-lifetime opportunities.

I’ll always love this skyline (and how fitting that we got a blue-sky day on one of my last shoots in the city!) – I’ll definitely be back to visit. 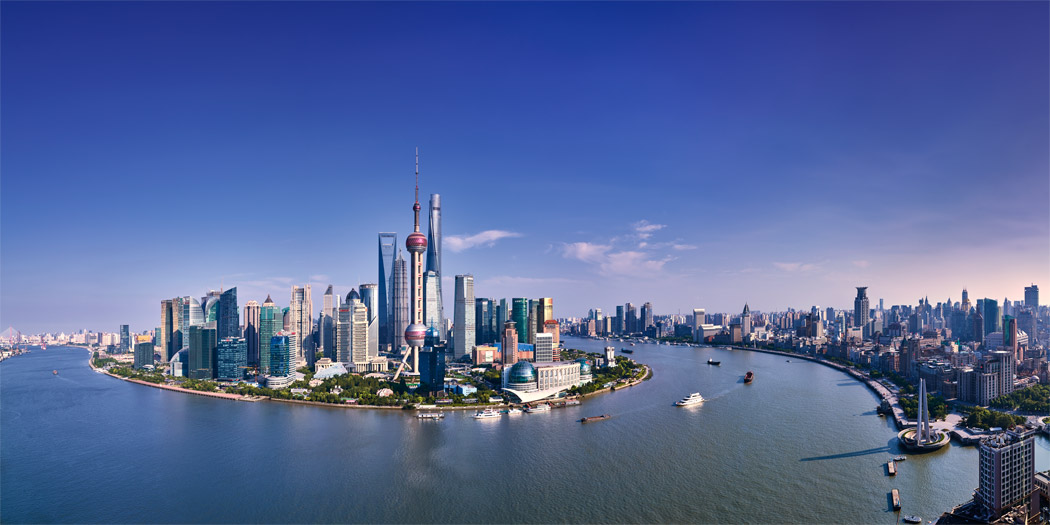 For now, however, it’s time to refill my lungs with clean air before that dreaded PM2.5 takes any more of my life away…!

It's not "haze", it's Deadly Pollution : Malaysia, Truly Asia...