THIS is the Shanghai I see. 🙂 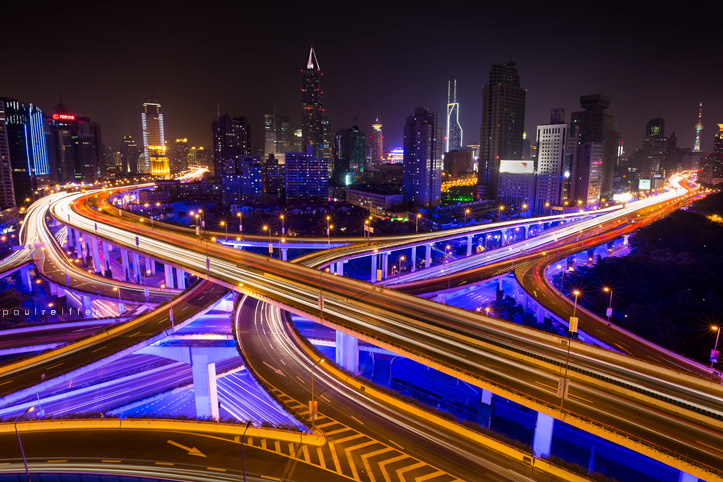 Millions of images exist of the PuDong skyline taken from The Bund, the famous “Oriental Pearl Tower” now dwarfed by the presence of Jin Mao and the SWFC – indeed, I’ve even shot it myself (although granted, from a slightly different angle 😉 ) So, why would I want to shoot a road network? Well, for two reasons:

1) When you live here, you see a different side to Shanghai – it’s not all about the skyscrapers, it’s about the sheer volume of people around, the movement and the change that happens on a daily basis.

2) This is far from the easiest shot you can get of Shanghai. You’ll see why shortly…!

Loving a challenge, I’d seen a similar image on an old advert about 6 months ago. For me, it really showed the other side to Shanghai – the weekend light show as all the elevated roads (sometimes 15 storeys up!) glow in fluorescent blue. The Chinese love their lights, and the city embraces that – whenever there is an excuse, bridges, parks, and anything that can be lit, gets illuminated – and the effect is dramatic to say the least.

The problem was, how to get the shot. From the street, you don’t see the fact that Shanghai’s 3 ring-roads really do wrap around the skyscrapers like a snake – and getting high at a busy enough intersection would be a challenge. Luckily, the enrolment of a good friend of mine did the trick. I set off in the car, and the messages started coming in as his “negotiating” began at the location I’d found…

A HAT?!? Granted, I was keen to get the shot, but there comes a point where it’s clearly going to be an issue! For the avoidance of doubt, no wrongdoing was committed in order to capture this image, but when we pulled up to the location I needed, all became a little clearer. Yes, there was a high building. Yes, it was THE perfect spot. Yes, it would involve somehow gaining access to the roof. Yes, it was the dead of night and the whole place was surrounded by…

Not to be put off, we left my driver downstairs (this must be the closest he’s ever been to a stakeout!) and the negotiation clearly worked : 5 minutes at the top, that was all we were given, but it was 5 more than I thought we’d have.

So, camera prepped, tripod ready, remote cables connected and all the settings (hopefully) set up ready to go the second we got to the top, we set off. 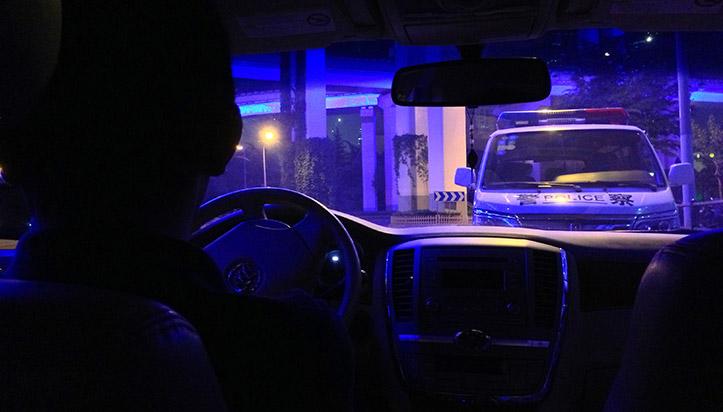 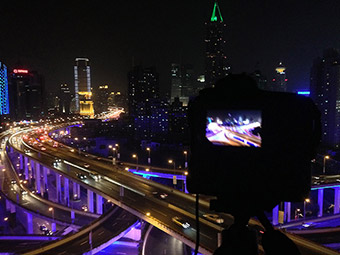 Granted, it was a rush. And when you only have 5 minutes, 20 second exposures are costly. We actually pushed him to nearly 10 minutes in the end, but wow, am I glad I got everything set up and ready in the car!

From above, the problems also became clear – Shanghai doesn’t have a “rush hour” it has “rush nights”, and cars that stop in traffic are useless for showing light trails.

The first shots I got were far from what I had in mind. Clearly it was luck, but the traffic started moving after the first 2 minutes of being up there and the flow of trails started to appear.

Setting a camera to f/14-18 gives you the natural starburst effect when a point of light occurs, and gave me (in my mind) the exact image I was looking for. At 16mm, it encompasses a huge amount of the city – all the way to the Oriental Pearl Tower on the right hand side, over the river and into PuDong. I’m sure 14mm would have made me even happier, but the distortion really kicks in then and shooting straight buildings starts to look weird if you push it too far.

So, no arrests, quite a few beers purchased, and a unique view that not many visitors to the city will get to see. (Well, from above, anyway!)

Made In Shanghai : Street Photography - Walk 1