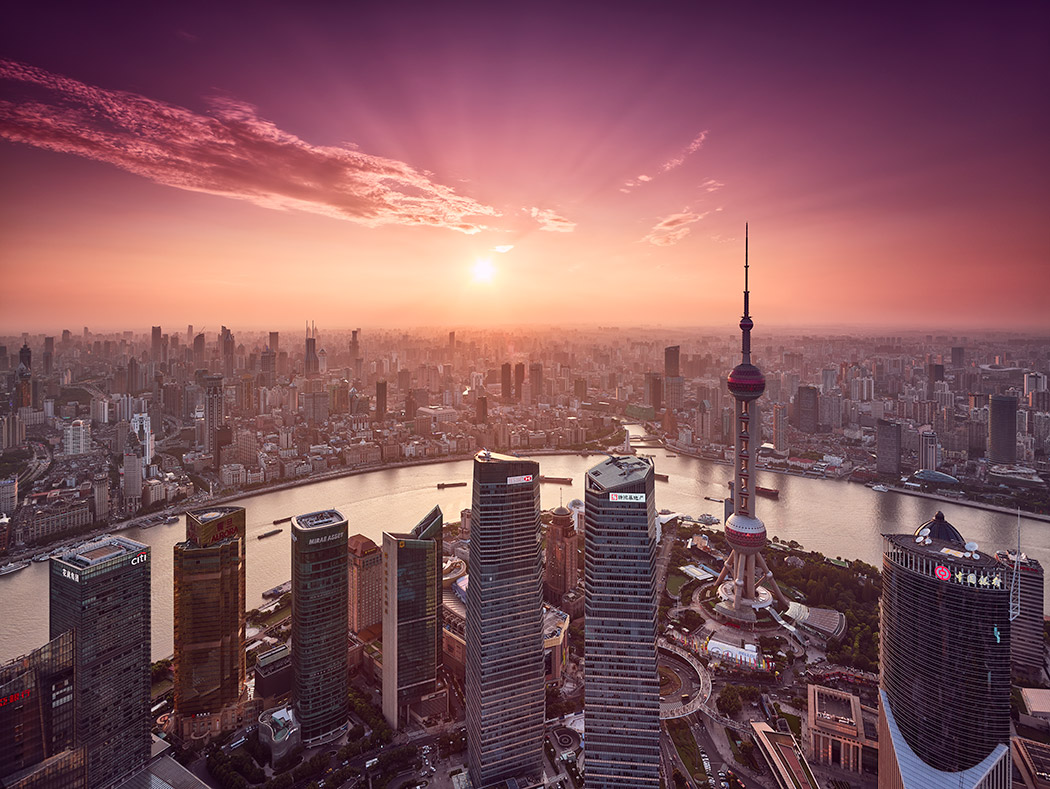 Of course, witnessing that sunset was a special moment in itself – but being up here on the rooftop of the Jin Mao Tower, the home of the Grand Hyatt Hotel in Shanghai, was especially significant for me. Soon, I would be leaving Shanghai – a place I’ve called home for 3 years now – and this was a return to the very first building I’d ever visited in Asia.

Stood up on the roof with my camera – I couldn’t help but take in the scale of change in Shanghai’s recent history as it was laid out before my eyes – making the moment even more notable.

While not the highest building in the world, or the most modern, or record-breaking, the character and design of the Jin Mao Tower makes it such a significant part of the skyline that it’s still one of the most recognisable buildings across Asia. Housed between floors 53 and 88, the Grand Hyatt Hotel occupies the top part of the skyscraper and it was thanks to these guys that I had access for two nights to capture the view from outside.

When you’re on top of a building for daytime, sunset and night shots (and bearing in mind the amount of security admin and access approvals that need to be completed) you tend to stay put, despite the 3-4 hour total time. On a positive, that gave me the time and opportunity to look back at my photos from 2006 – taken on a simple compact camera – when I first visited this amazing city.

Those shots above are from 9 years ago. At that time, the Oriental Pearl Broadcasting Tower and Jin Mao tower were the only real skyscrapers within the Lujiazui financial district in Pudong. The building you see being constructed behind the distinctively spikey Jin Mao Tower is what is now known as the “Bottle Opener” (or SWFC) – a building I’ve visited many times since. The excavation site on the above right picture is the foundations for the IFC – now a permanent, well-known fixture in Shanghai, and home to my shot “circular motion“. In my next blog post, I’ll share with you some of the latest views of the same skyline as it currently stands – you’ll see a lot of that empty space has been filled with some crazy tall structures!

Back to the city of today, and it was full security setup on both nights – safety first and all that 😉 (it was actually weird wearing a harness to shoot – it’s not exactly mandatory in many parts of Asia…!)

Of course, from up here there are many other viewpoints to see beyond the most obvious one of the river and cityscape background. On one corner, you can witness the full height of the “big brother” of the (now) cluster of three megascrapers – the “Shanghai Tower” from where I photographed a few weeks before.

Turn another corner, and you meet the hotel’s sibling – The Park Hyatt, housed inside the SWFC or “Bottle Opener”. Looking closely at the full 80-megapixel image, you can see every person on all 3 levels of observation area in the tower looking at me too! Of course, the golden light as the sun fell was perfect to reflect and highlight the amazing structure of this building – designed to put extra stability on the outside without compromising space internally.

And then it was time to wait. That fantastic glow of sun for the first shot in this post is a by-product of Shanghai’s smog “challenges”, but at night the visibility tends to improve and that was what I was hoping for. That, along with the 7:00pm sharp nightly switch-on of all the lights.

Now, a skyline with no lights can look a little sad, so it was the one thing I was waiting for – but also the one thing that nearly wiped out my planned shot too…

A new lesson learned: If you’re stood on the illuminated part of a building that can be seen for miles around, that means there are some pretty hefty lights pointed straight AT you. And Jin Mao is no exception. BOOM, at 7:00pm exactly, the floodlights turned on and I couldn’t see a thing! 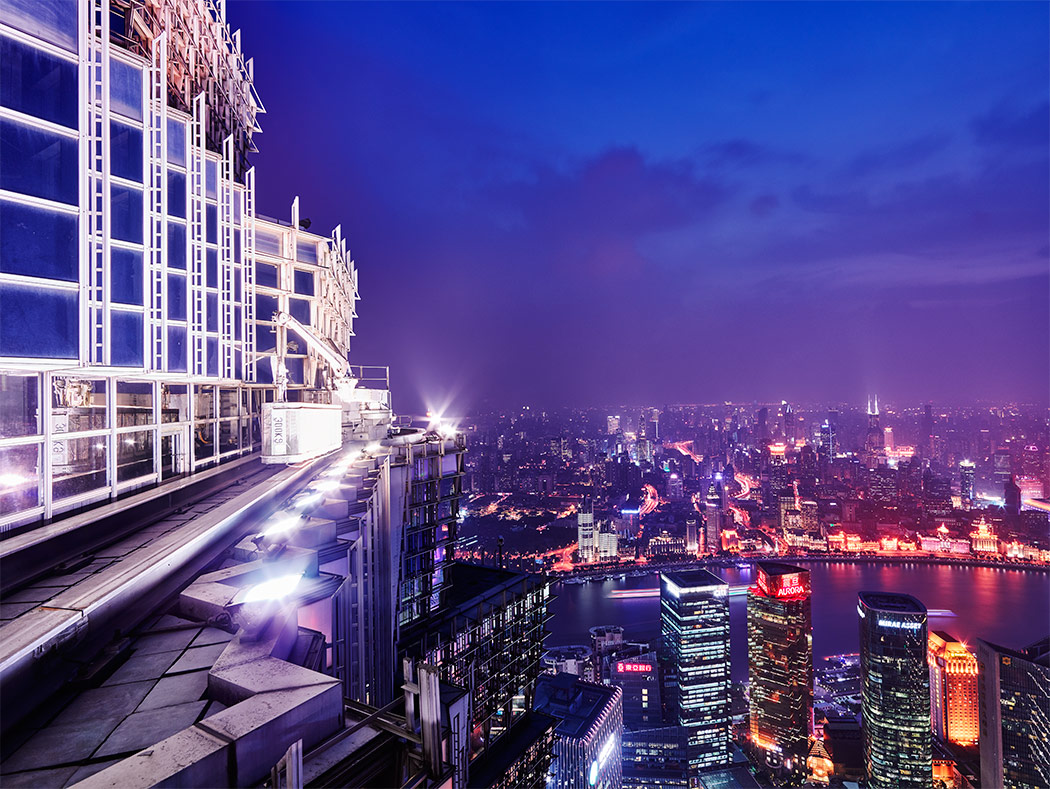 Luckily, a bit of “body shielding” (a few people who’ve shot with me will know what that refers to!) did the trick. I’m not sure how many tourist pictures I’m in as a result of being up there on those two nights, but the shot I got looking out towards them was definitely worth it from my perspective: 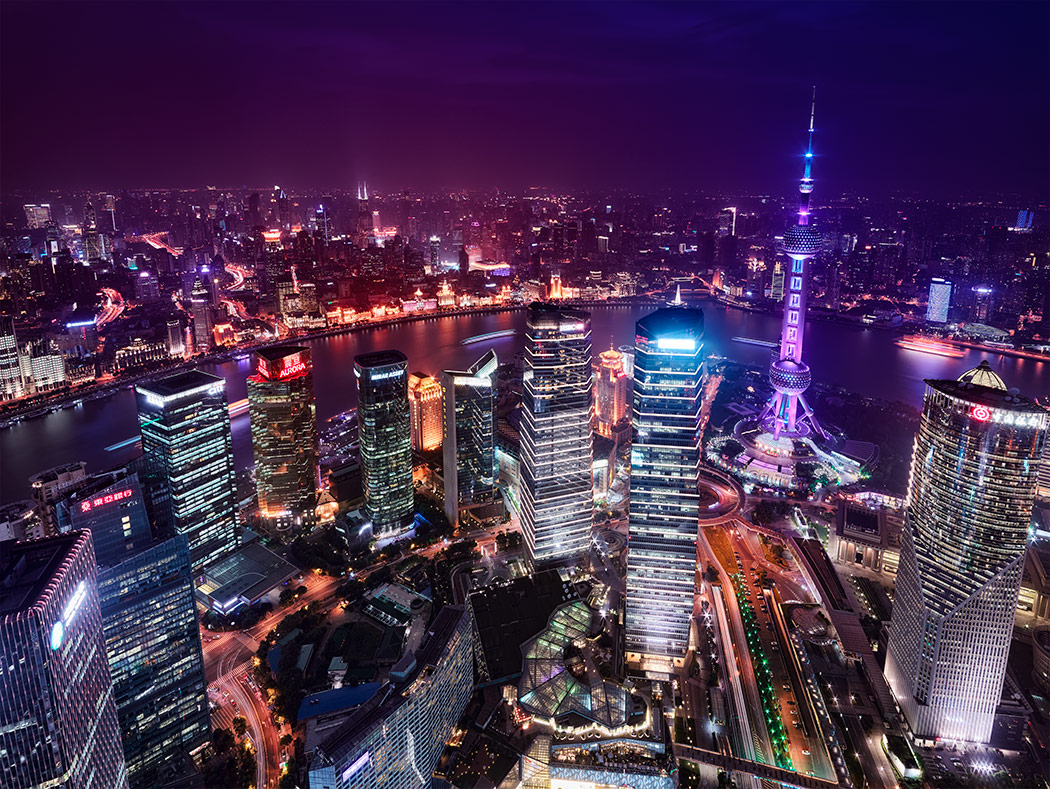 What a city. And what an amazing way to spend one of my last shoots in Shanghai – on the rooftop of the very first skyscraper I stepped foot into when I visited Asia all those years ago. Thanks to all the Hyatt guys, I owe you one 😉

Japan 2015 - Capturing the Tokyo Tower from the Andaz Rooftop