At the time of writing, this is literally the highest platform that a Phase One system has ever been in the world – pretty cool!

Being able to capture the view below in 80 megapixels of definition is amazing, and the level of detail I managed to record (despite the circumstances you’ll soon read about below!) still surprises me. This might even become my new desktop background for little while 😉 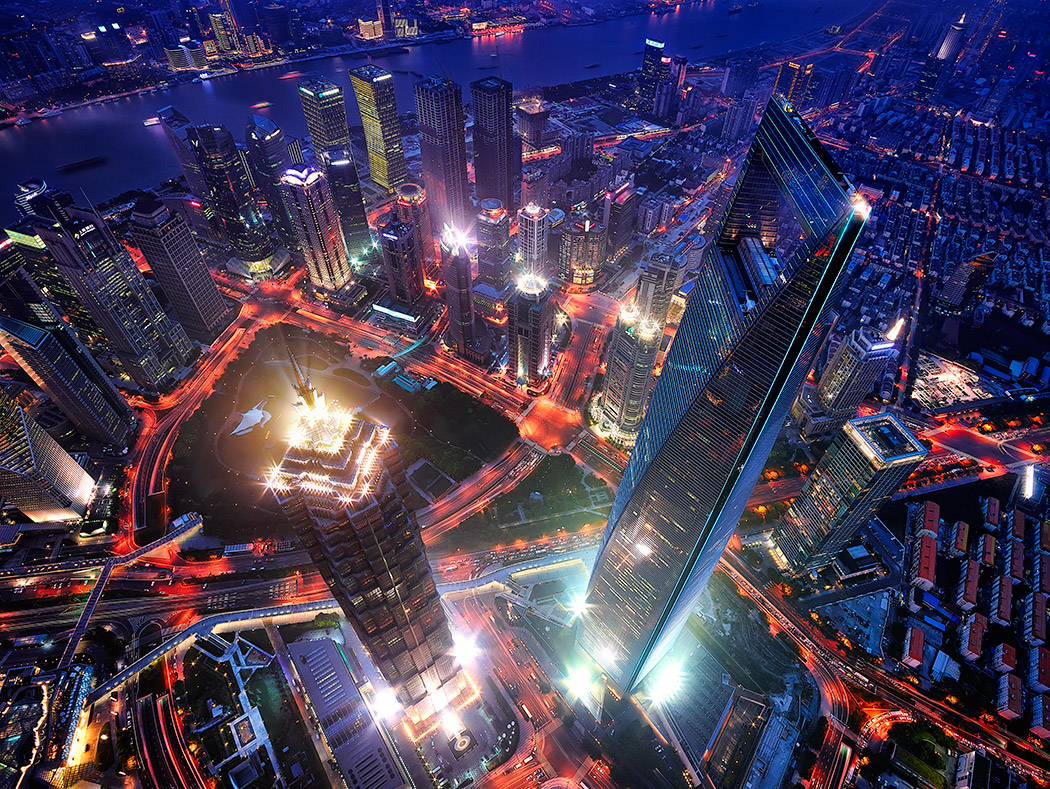 Looking down on two of the world’s tallest skyscrapers is an interesting perspective, and really does mess with your mind when you get to do it – but wow, Shanghai’s brand new “megascraper”, the tallest building in China, is high. Really high – 632m to be exact.

Granted, it’s technically smaller than the Burj Khalifa in Dubai, but as I explained a few months back, a lot of the Burj’s claimed “height” is actually not real. You see, while the observation deck of Dubai’s mega-structure is at 556m, the Shanghai Tower’s is at 561m (out of a building which is 632m tall). And guess what, we were a little bit above that too… 😉

Now part of Shanghai’s “trio”, the Shanghai Tower now joins the Jin Mao Tower (420m) and Shanghai World Financial Center / SWFC (492m) to be the third and final huge building within 100m of each other. It opens in a few months, but I was (extremely!) lucky enough to get early access and shoot from above before the barriers and glass get installed, preventing a completely clear view from the public areas.

There’s still quite a bit of work to do up there, but this place will be amazing when open. Not only is the top observatory deck open to the air above, but there are three glass-floored dining rooms which are on roller systems allowing them to span out over the edge of the building to allow diners an amazing view down while they eat! Not for everyone, I’m sure, but quite an experience nonetheless! A lot of the top few floors is also given up to a unique wind-power generation system (the far right image above) which, when running, can power the restaurants below. 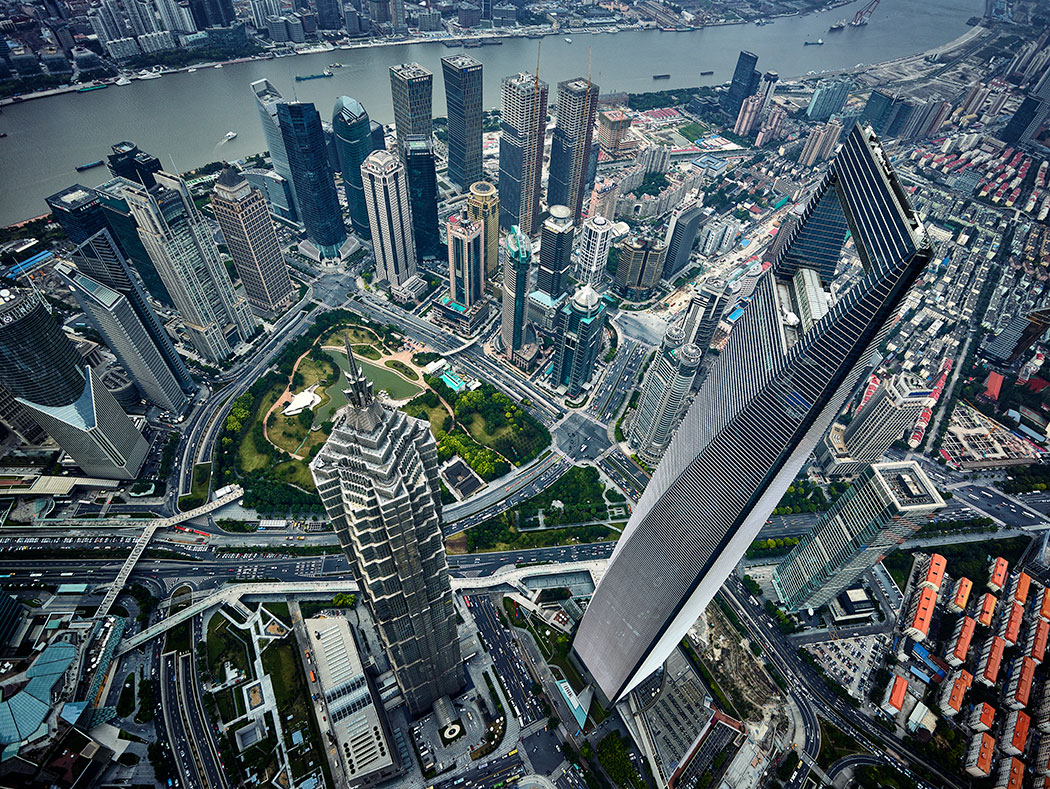 Arriving at the tower, we were hopeful. The service elevators take a lot longer than the final observatory ones will for the public when operational – but when we got to the top that amazing view was  there and ready for us to capture. Having spent time in both of the other buildings in this shot (Jin Mao to the left, SWFC to the right), it’s a rather strange experience to be looking down on them – especially in a city where private aviation is pretty much illegal, meaning helicopters are a no-no…! 🙁

And so we waited for nightfall.

At which point, we realised the inherent problem with being this high up in the stormy season in Shanghai – we were very quickly inside the weather! Oooops.

Still, never one to waste a shot, I clicked away, hoping for a clearing – I got a brief one (the top image of this post), luckily, but then things started getting dramatically worse. There comes a point in every photographer’s shooting plan where things simply aren’t going to get any better – and this was it. 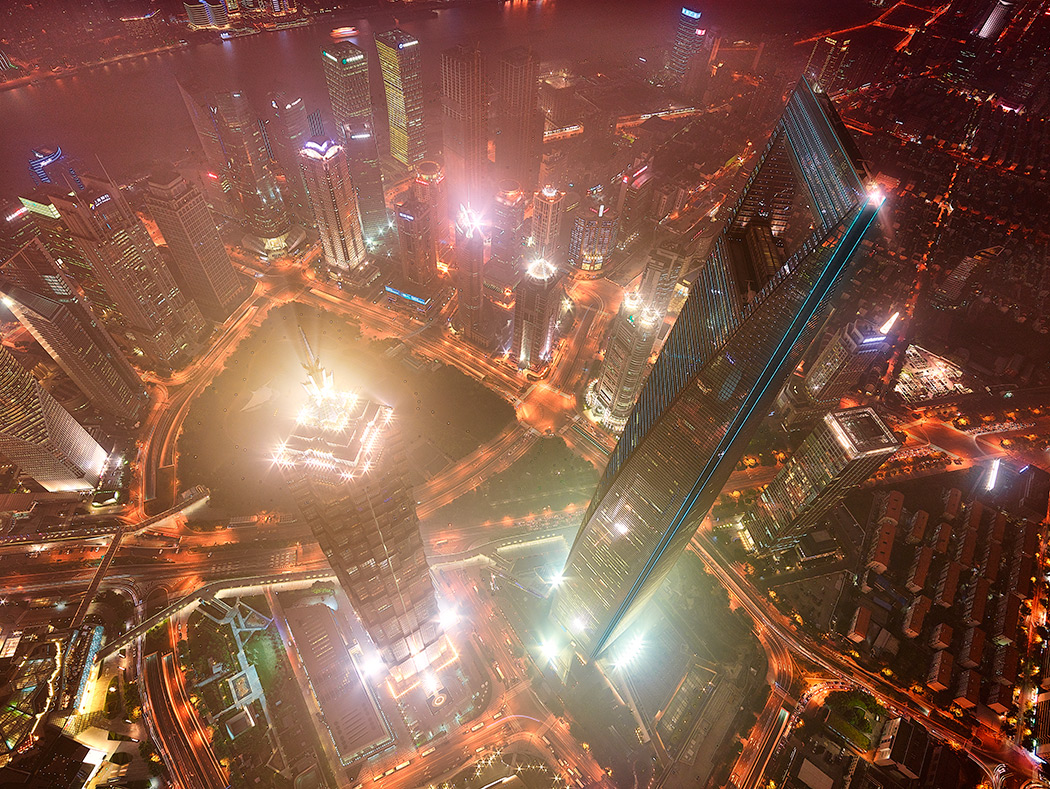 As the cloud thickened up, it was time to leave with a great view, a fantastic opportunity and a lucky (one) shot in the bag…

In reality, I’ll be heading back to re-shoot on a clearer day as even my favourite shot still has too much moisture in the air so the lights aren’t quite as sharp as I’d like. But then life would be boring if every little thing went perfectly to plan, right? 😉