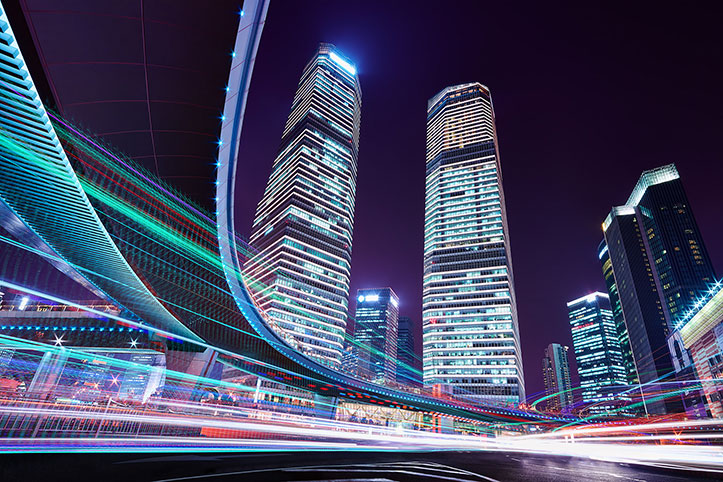 Who remembers being told as a kid to make sure to look both ways before crossing a road, and that cars are dangerous? Yeah… I do.

Sadly, when I drove through Lujiazui on the way home the other night last week, I saw a sight that made me cast that very wise advice aside and resolve to get the shot I pictured in my mind, no matter what. Skyscrapers, a cityscape, the financial district, a lit pedestrian overpass – all circled by a massive collection of LED-covered and neon-clad buses, taxis and strange vehicles. I just had to capture the feel of this place.

My driver, Bob, is thankfully now used to driving through the blue lights of the city to get me to strange locations at night (indeed, he’s getting good at being on “stake-out”). So the request to return to the same spot 4 nights in a row for hours at a time didn’t phase him. Unfortunately, it frustrated the hell out of me; each and every time I clicked the shutter, something crazy happened to ruin the picture. On an iQ280, a 2 minute exposure actually takes 4 minutes (by the time the dark-frame has been captured to reduce noise and artefacts from the initial capture) so when you’re spending that long on each shot, a person standing right in front of your camera at the end of the exposure is beyond annoying… 🙁

Each and every night I witnessed cars going the wrong way across the road, vehicles with no lights on, bikes driving over the roundabout (literally), buses full of people racing into cars, people stopping in the middle of the roundabout and getting out to sit and watch (as in the picture above!). It’s crazy! Shanghai’s drivers worry me at the best of times, but my time on the Lujiazui roundabout for these 4 evenings has just proven to me they really do deserve the title of “the worst drivers in the world”.

I’m very aware that setting up my camera equipment on the ground in the middle of a 4-lane busy roundabout puts me (at least temporarily) in the same category as the crazy people I witnessed during this run of shooting – but at least I got the shot I wanted. The bright neon-blue of the buses passing, the green LEDs flickering to add a “frequency” to their light trails on the left of the shot, the headlights of the cars zooming past me and even the red and blue code of a police car screaming through the traffic – I managed to capture it all. And for this one frame, I managed to avoid people walking in front or cars stopping right in front of me to take a look at what was going on!

Yes, it was stressful and yes, it was cold. But yeah, I love this picture. 🙂