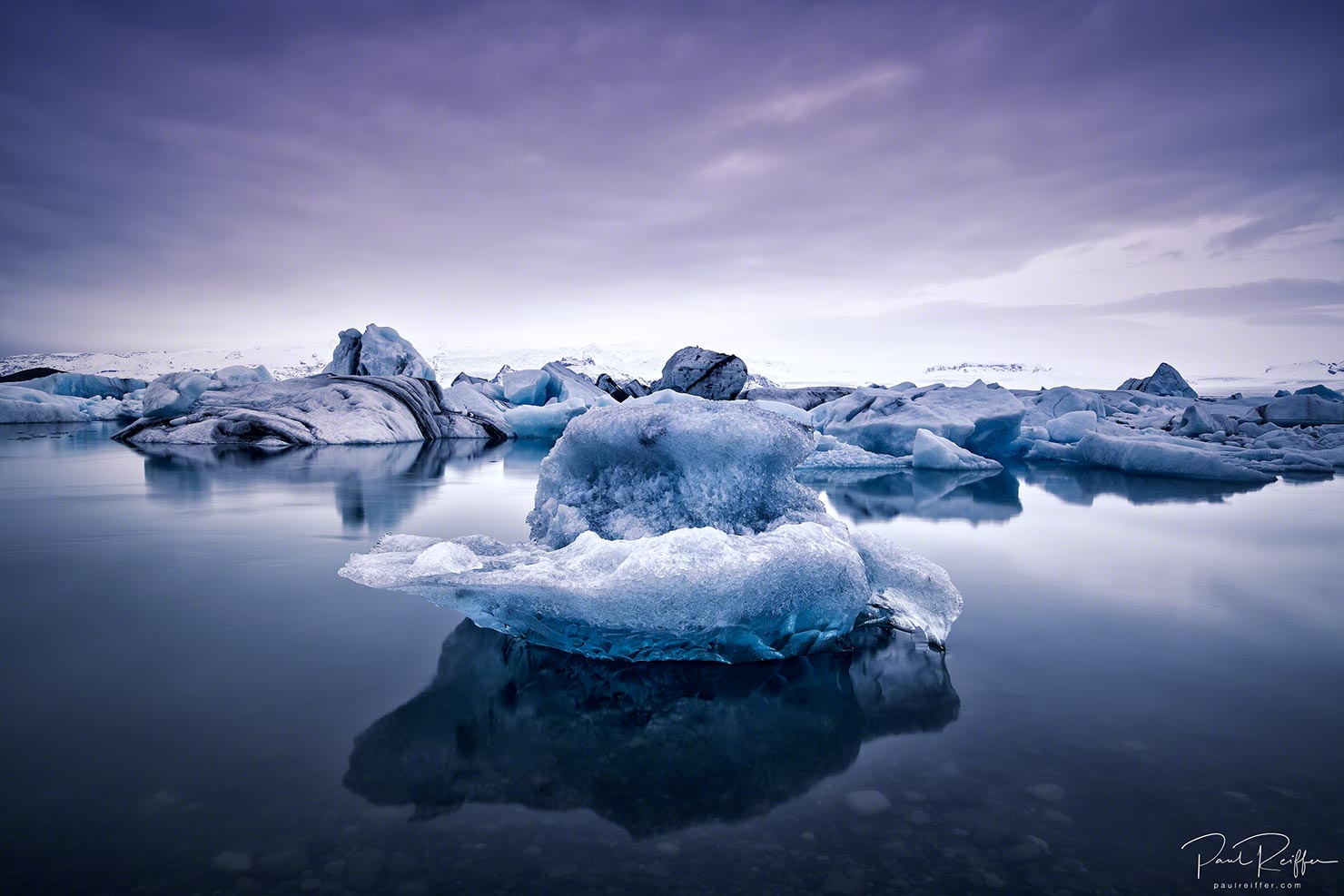 For the briefest of moments, the sound of cracking had stopped – the huge iceberg formations that feed Iceland’s iconic Jökulsárlón (or “glacial river lagoon” when translated) had steadied and the tide was turning. While often full of baby icebergs which have fallen away from the surface of the Vatnajökull glacier, finding one of this size in isolation resting in still water (with very few people around to distract) was quite unusual. 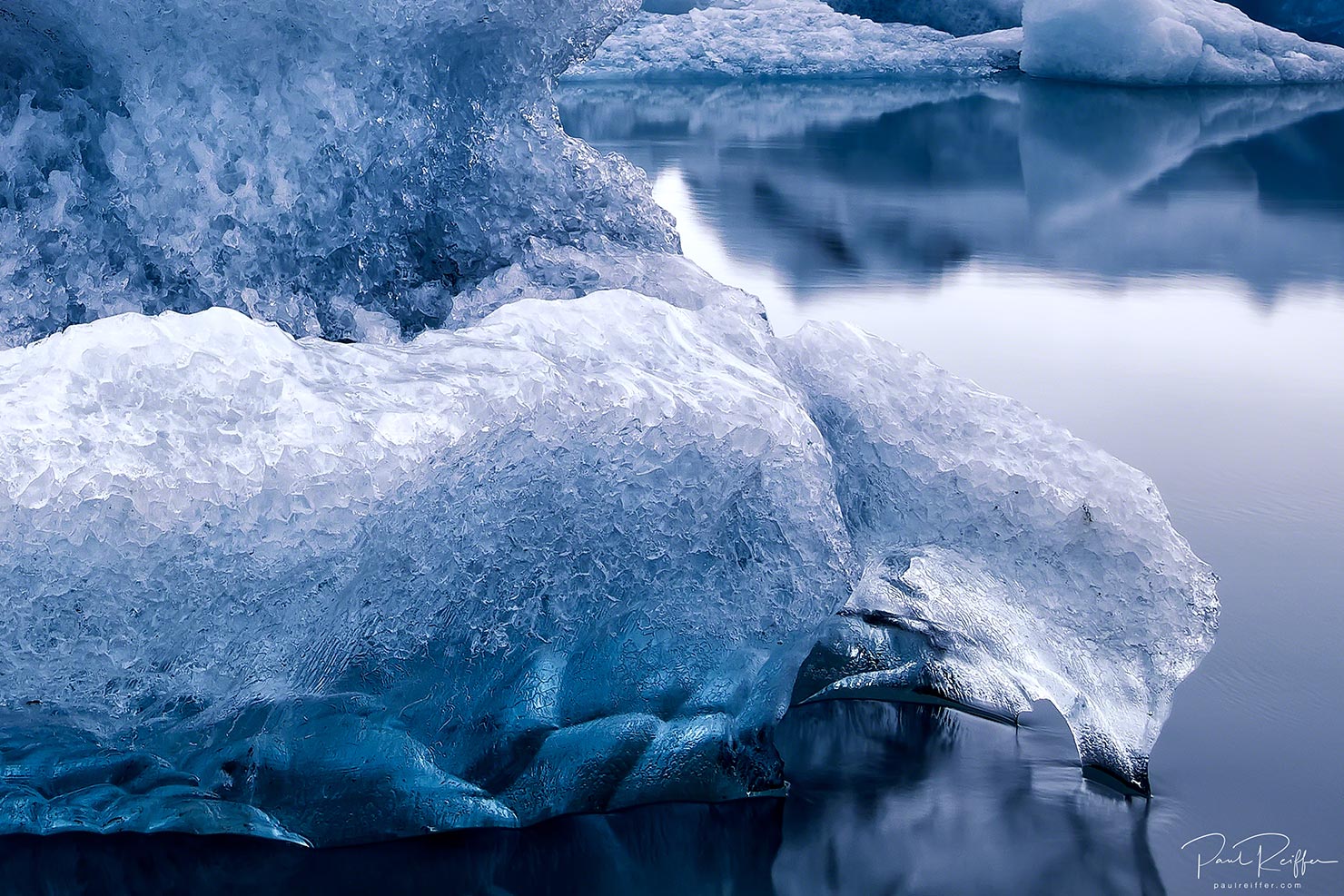 Even better, the stillness allowed me to capture a long exposure in full 100 megapixel resolution, meaning the level of detail recorded by the camera was absolutely stunning – as demonstrated by the 50% crop of the iceberg above. The aqua blue glow underneath, ice whites, and deep navy tones of the lagoon all combining to offer up a moody atmosphere to this otherwise calming scene.

Only the day before had been stunning sunshine and blue skies – so temperamental is Iceland’s climate that regular visitors tend to ignore most of the daytime forecasting (it’s usually wrong to some extent). 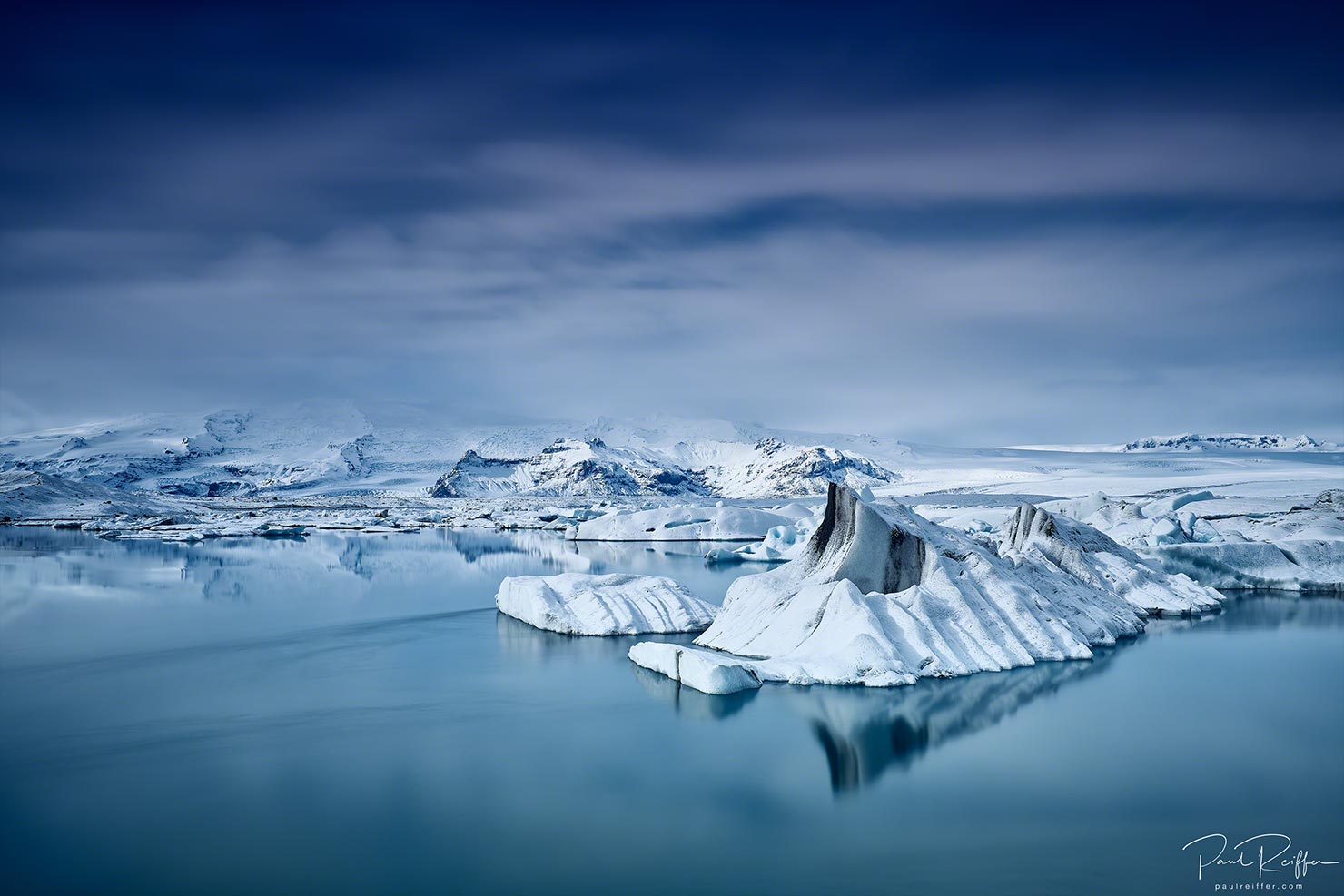 During the 7 days across the island, we’d faced blizzard conditions, sunny warm skies, horrendous rain, strong winds and everything in between. Stood at the lookout point of Kirkjufellsfoss on day, however, it was a great time to demonstrate that “good” weather means different things to different people.

While I’m the first to agree that a long exposure shot in heavy rain and wind is probably not going to yield much in the way of stunning end results, anything short of that still has potential. Indeed, I’d often prefer to shoot a moody, cloudy, scene than a pure brilliant blue sky above with no texture – and this shot from Kirkjufell was the perfect proof for that. 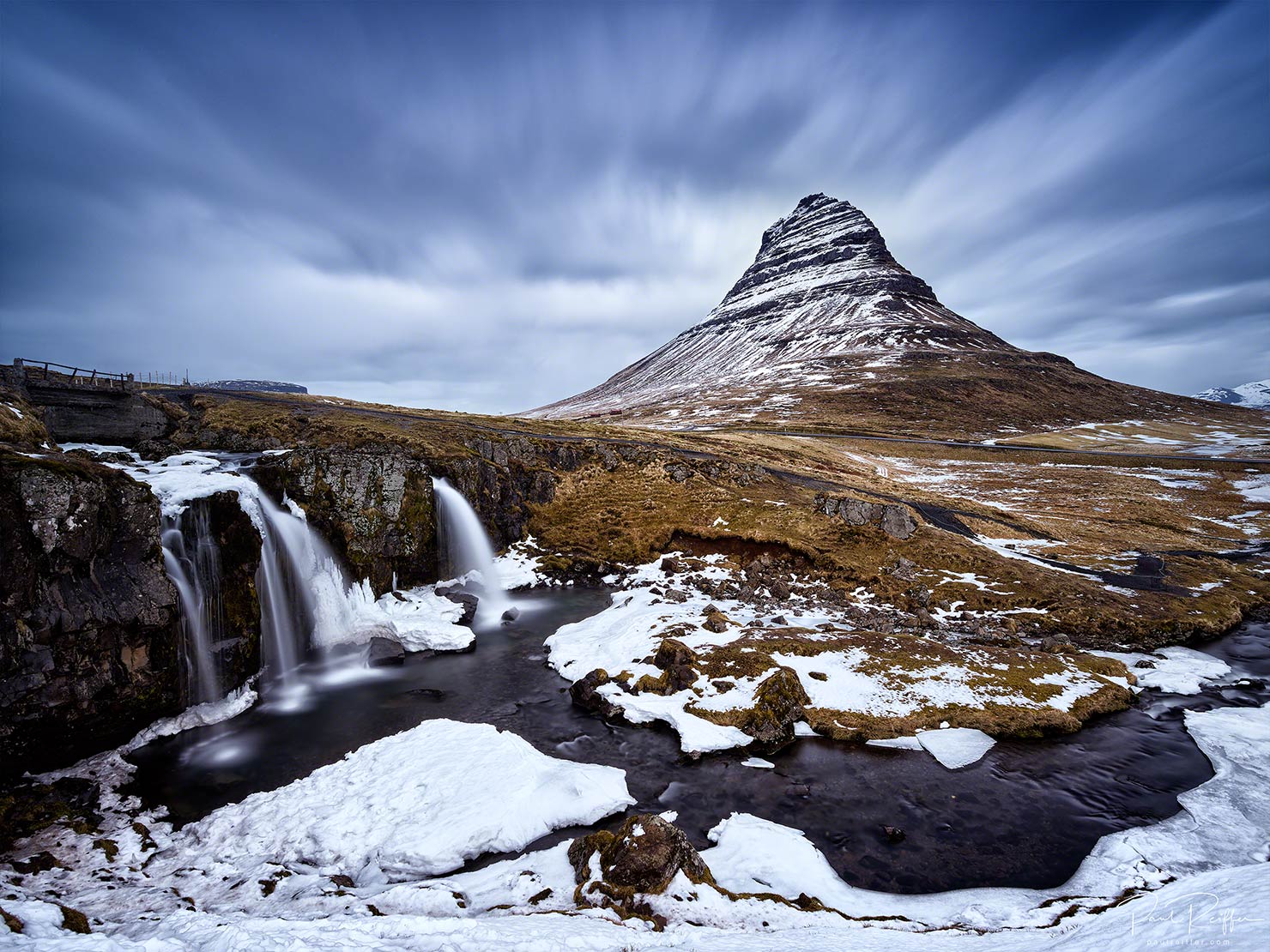 With that in mind, our arrival at Jökulsárlón was met with two forms of positivity:

1) The black sand beach (or “diamond beach” as it’s affectionately known) had just been “topped up” with baby icebergs floating out from the lagoon with the tide.

2) That stormy weather in the sky looked like it was going to hang around a little longer.

A colourful sunrise was unlikely, but I wanted to head out before most of the tourists arrived, so we could get up close to the fresh icebergs as they washed up and down the beach and ultimately out to sea. Heading out before dawn to fresh snow, while murky out there, meant the conditions looked good for photography.

The dramatic sky delivered deep enough colours and tones above to compliment the brilliance of the glass-like ice structures scattered along the beach. Getting up close to each of them, with the contrast of the black sand, I had my pick of areas to shoot with nobody else there to get in the shot. 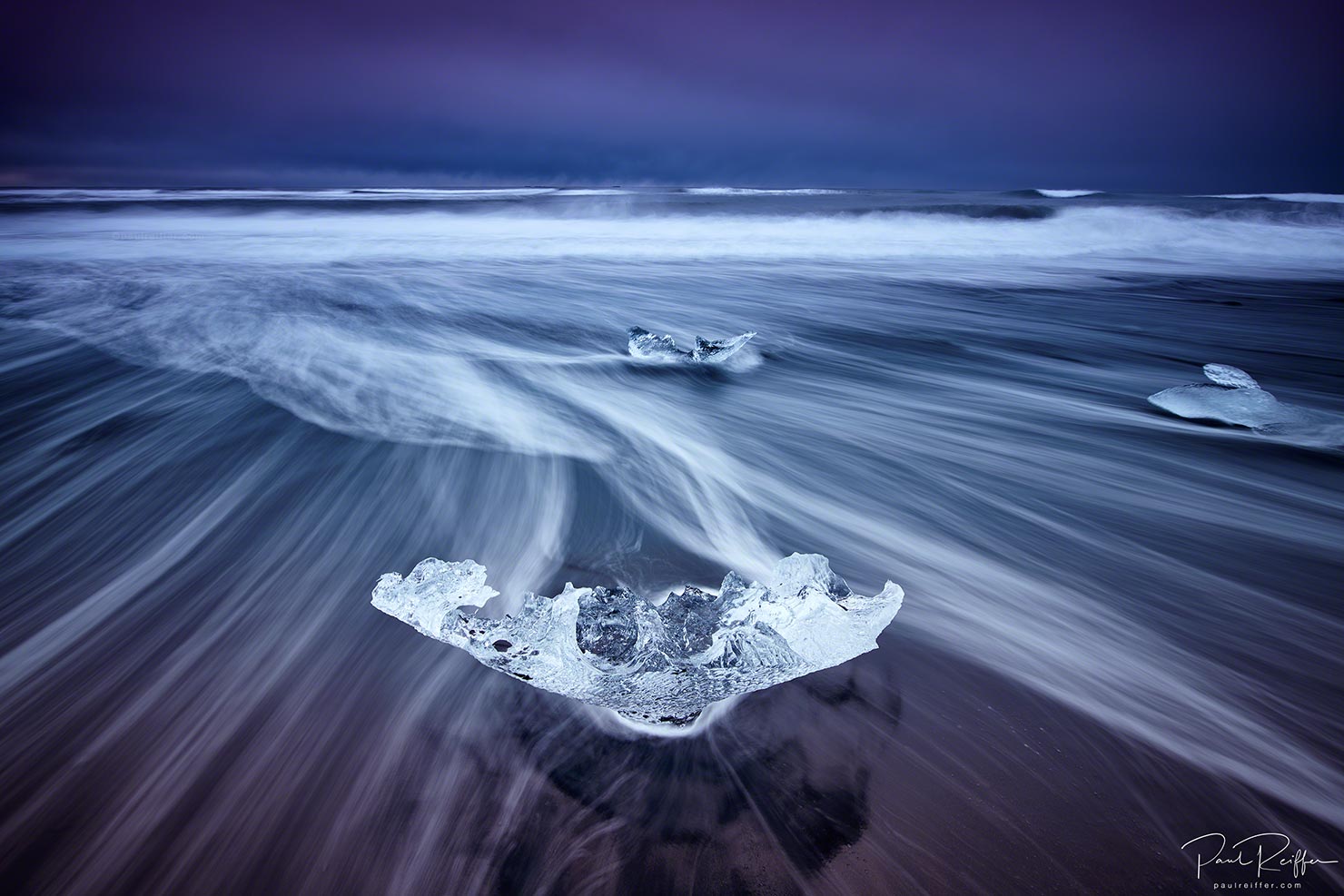 Clicking away, the shapes and reflections just kept coming – while I’d managed to capture sunrise at the same location last year, this series was all about the textures that surrounded the chunks of glacial ice, the motion of the water tracing lines around each of the formations and the knowledge that the scene was never the same from one second to the next.

It’s also easy to get carried away and complacent when you’re concentrating on shooting a moving target. Despite the yells from behind of “to your right!” and “wave!”, I carried on pressing that button. The moment of realisation happened through my viewfinder – why had the tripod suddenly dropped, changing my composition?

Then came the signature frozen, wet, feeling in my boots. Ooooops.

The sea retreated – the water in my shoes didn’t. There are few times I’ve been more grateful for foot-well heaters in the car than that morning during the 30 minute drive back to the hotel. There’s a reason the icebergs last a long time in the “warm” ocean water : it’s not warm at all.

So, icebergs captured, waterfalls explored – all that remained was to head out one evening to see if the light show was going to play nicely on this trip. So far, I’ve managed a 100% success rate of seeing both the Northern and Southern Lights (Aurora Borealis and Aurora Australis) when heading out with a plan to shoot them, and I had no intention of ruining that record.

The weather was far from promising – thick cloud cover forecast for almost every night we were there, but the Friday looked better than other days, and there was the tiniest of holes that had been consistently predicted over Jokulsarlon throughout the week. Many of the tours had cancelled their excursions – some had diverted to other areas west of where we were at Hofn, but I had a feeling we could be lucky with that tiny gap over the lagoon.

With dinner sorted, it was time to put the forecasters to the test (after all, the activity level was high enough to see, if only we could get a clear patch of sky). 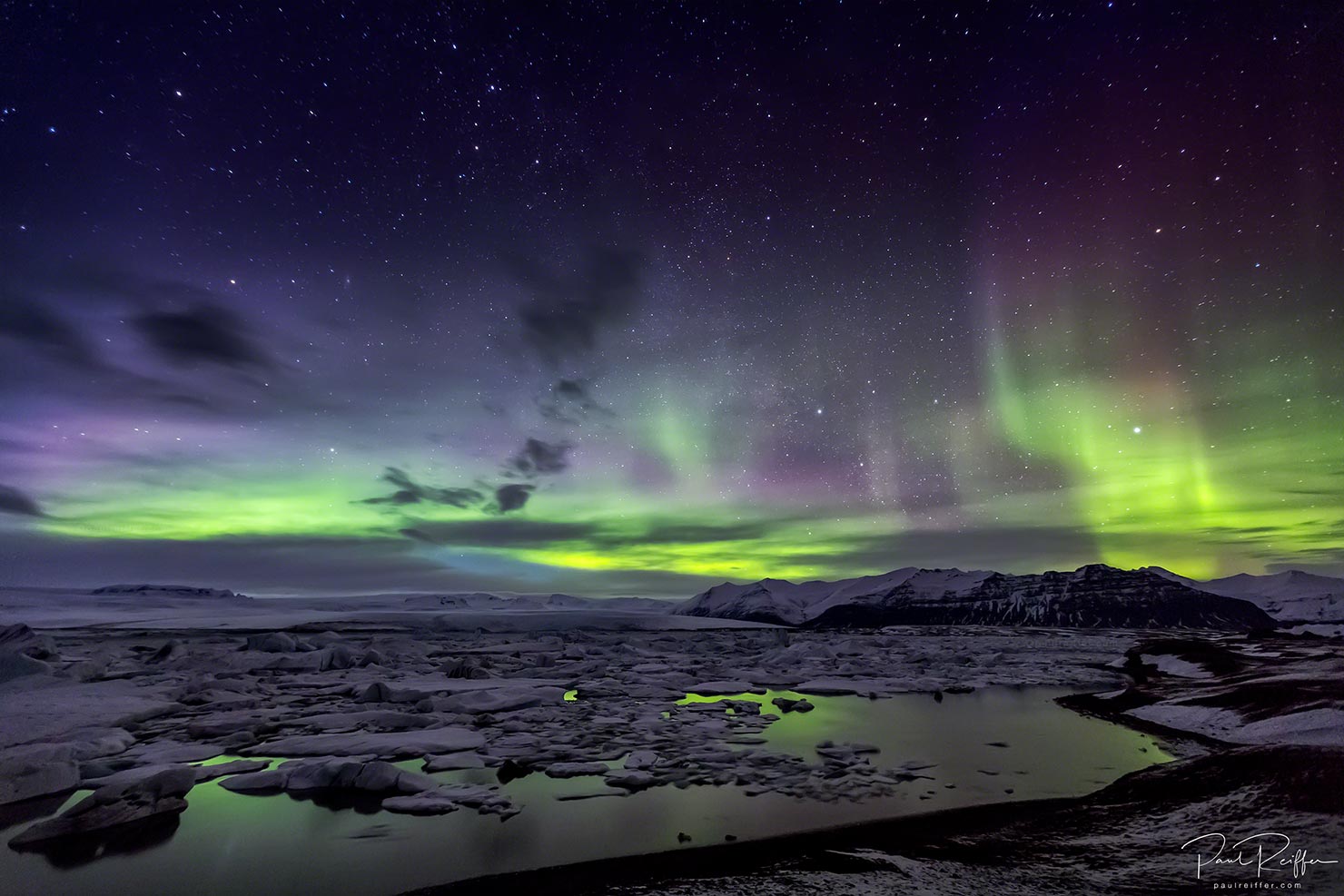 And “lucky”, we were. What a show we were treated to that evening. Strands of bright light stretching miles above the earth, meeting the distant glow of greens and pinks towards the horizon – all the time surrounded by the natural phenomenon of the Jokulsarlon lagoon, full of baby icebergs in the middle of the night.

Well, that was a wrap! With the major shots all ticked off the list, it was time to return to the stunning Fosshotel Glacier Lagoon for a drink or two and head to bed, ready for the drive back to Reykjavik in the morning. All was good in the world…

…Until we woke up.

The view from the day before, compared to the same view the following morning, gave an indication of how extreme Iceland’s weather changes can be. The 4.5 hour drive turned into 6, passing cars on their roofs which had fallen into rivers by the side of the road – along with vehicles which had slid off the corner of mountain passes and buried themselves in the side of a tree. It’s a good reminder of how careful you need to be when travelling across this amazing island. Stunning though it can be, it is equally as dangerous if you’re not prepared for the conditions.

Reykjavik itself appeared to have escaped most of the stormy weather – leaving us just enough time for one last signature hotdog and a bit of shopping around this fantastic little city before heading back to the airport with a memory card full of scenery and a lifetime’s worth of memories, as always seems to be the case with every trip I make to Iceland.

book your trip to Iceland with us

For those of you inspired to join us on our next adventure, don’t forget you can book one of our Icelandic workshops right here – with luxury travel, accommodation, all-inclusive pricing and access to the most advanced camera equipment in the world during your stay. Check out our workshops page for more details!

While I understand the importance of these ridiculous wedding shoots that are so popular in the Eastern hemisphere (remember my visit to the fake British town, Thames Town, in Shanghai?) – could we maybe start a version of the Darwin awards for those photographers who put their clients in direct danger?

These (frankly) stupid people are risking their own lives, along with the lives of others, all for the sake of a Weixin/WeChat post of “look how amazing my wedding shoot is”. Ignoring signs regarding the freezing cold water of the waterfalls under which they’re standing in -5 degree temperatures, pretending to look happy for that one shot. Or how about standing on a moving block of frozen ice in a tidal lake (in high heels) just to be able to say “look at me!” for the camera?

Forgive me if I fail to see the funny side when I look at the list of names of people who have died in these extreme locations.

A place that is stunning to see? Yes. How fantastic that you’ve managed to get to Iceland to witness it first hand.

Endangering the lives of rescue teams to save you from a risk that’s already been clearly identified? Idiotic. Please, please, don’t return.