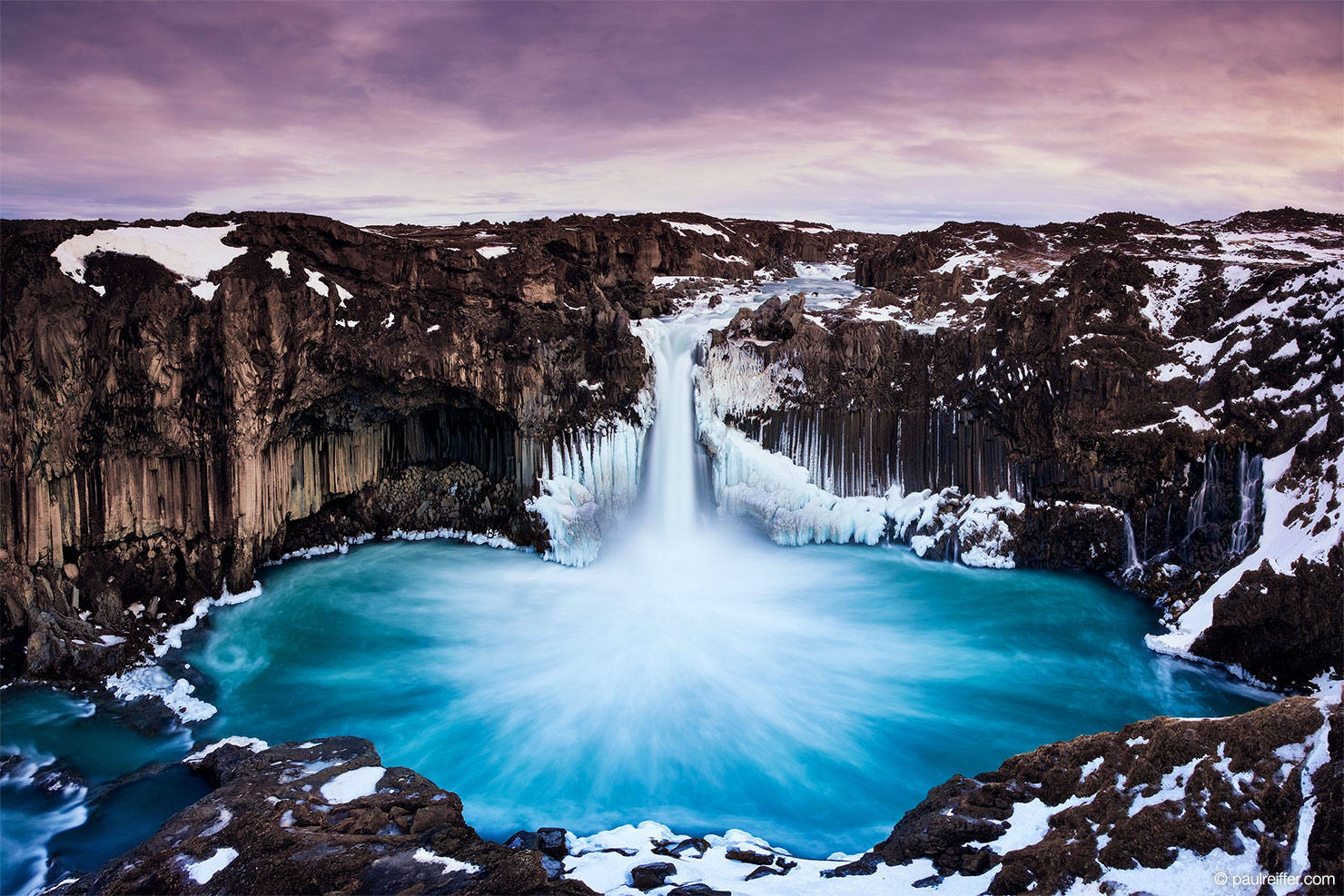 It’s a truly amazing feeling – that moment when you walk up to a location that’s taken ages to get to, having planned it for months, with doubt all along the way that you’d even arrive – to find the exact scene you were hoping for.

With a mix of relief, awe and then urgency; it was time to shoot the stunning Aldeyjarfoss waterfall, in the North-East of Iceland, before the weather closed in after our ice-bound trek across the hills to get there.

Landing into Reykjavik to hurricane winds the night before, I’d already now learned a few new things on this latest trip to Iceland in the winter…

Moving on, full of new and exciting knowledge, it was back out to the hurricane-level winds (up to 42m/s – or 150km/h) to see what could be salvaged from this (now doubtful) photographic trip with Thomas and Mark.

Iceland’s weather can be both fantastic and fantastically cruel at the same time. What makes this place so special, in part, is due to the frequent carving of the landscape by nature itself – but this can equally make it a huge challenge to shoot.

While attempts were made to photograph in the crazy wind and heavy rain, reality soon set in that this might be a forced couple of days’ editing back at base for the three of us. It was impossible to stand up at times, let alone place a camera and tripod down with any confidence – and when the wind died down, so did the cloud structure, leaving flat grey skies and no contrast. 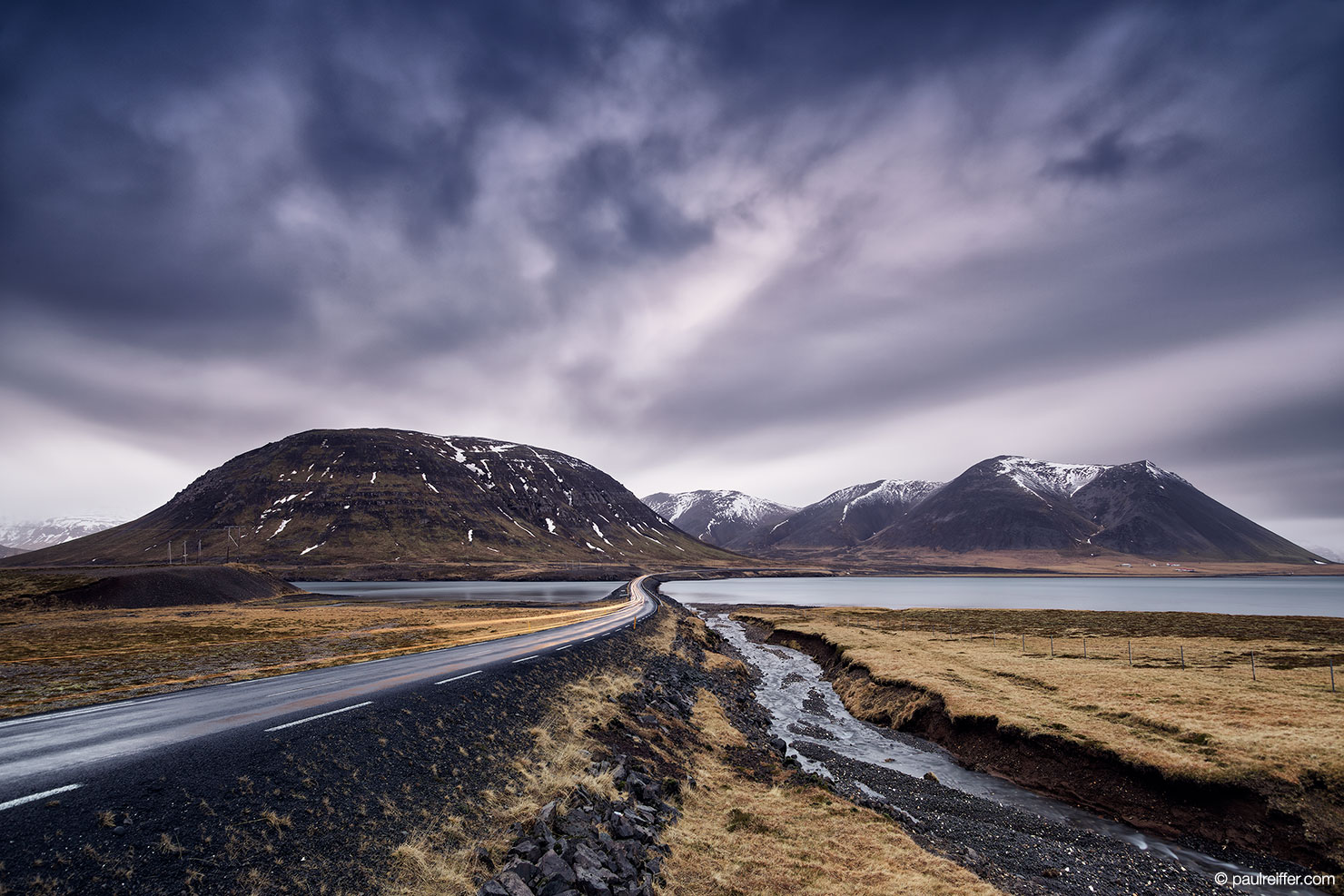 Making the most of things in one lay-by near Kirkjufell, a brief respite in the storm (and using the car for shelter) there was a moment of opportunity to capture at least one of the views from this stunning place – but this wasn’t my target for this trip – that place sat much further around the island, on the opposite corner to Reykjavik : Aldeyjarfoss.

Travelling nearly 7 hours further across Iceland, the storm showed no signs of giving up. Indeed, many of the roads along the route had been closed off and things were soon looking even more bleak. The first “recce” we made to the location didn’t bode well either: closed gates and frozen paths, the road had been completely blocked off for the winter – it was simply too dangerous to drive there.

We returned the next morning, for the 0.0001% chance that things had improved – they hadn’t – and that’s when determination (and a little encouragement from the crazy German with me 😉 ) set in. The three of us had each flown in to Iceland on the basis of me sending a location around saying “hey, let’s shoot this!”; we’d then travelled through hurricane winds, snowstorms and sideways rain to get to the middle of nowhere nearly 7 hours later, and it was only 5km away across that sheet of ice. It was time to step into the cold.

We were the only ones there, but that was a selling point rather than a concern – knowing it would take a while to make it to a marker on a GPS, we packed up and set off. 1km in, I knew my sense of humour was failing as we slipped for the third time climbing up another layer of solid ice over a running river. Time for the disposable crampons (thank you Trespass!) to come out and play.

What a difference they made – turning me from clumsy-slippy-slidey-bouncy-fool to “crazy mountain goat” – to the point where I was towing the others across some of the more challenging uphill ice sheets. Note for the future: While we hadn’t intended to be ice-trekking, each of us should have brought our crampons with us just in case…

Just over an hour later – it was a downhill run across fresh, soft, snow – to the point where the Aldeyjarfoss waterfall was revealed. WOW.

Even those of us who’d slipped into the freezing cold waters beneath the ice at some point had managed to mentally move on. Just wow. The sheer force of this tower of water, beating the lagoon below; the vivid colour of the settled water against the bright white ice and frosty blue glacial formations surrounding the plume; the strangely perfect shape of the whole place – all combined to create this awesome scene.

That one, single shot, made my trip.

I’d planned to shoot another location which simply wasn’t going to work while we were there – making this an expensive visit for just the one print – but sometimes that’s just how it works and I was happy with that as an outcome. Oh, but wait, there was still the trek back… 😉

With a little bit of the pressure gone, it was time to plan the next day to at least try and capture more despite the weather.

Heading in to the Aldeyjarfoss access road across the wooden bridges, we’d actually passed Goðafoss – another waterfall location less popular than some of the others on the island, but no less stunning. While sunrise hadn’t been kind to me for the first few days, it was worth a try (especially as that doesn’t mean an early start during the Icelandic winter).

Conditions were still not great – icy walkways, slippery rocks, and a freezing spray of mist to cover your camera filters in seconds. That said, the “we’ve travelled for how long?” set in, and it quickly became a fixation as a target. The challenge was, there are two sides of this place to shoot – both looking south-west around 20 minutes away from each other – and I wanted to shoot both angles.

Turns out we got lucky.

Polarisers on, graduated filters at the ready, I shot from the south side first, then hurried across to the north side to capture the scene just as the sun was popping up through the clouds. While arguably the lesser-photographed view, the morning colours mixed with the clearly defined horseshoe of the south side of the falls was the shot that instantly grabbed me: 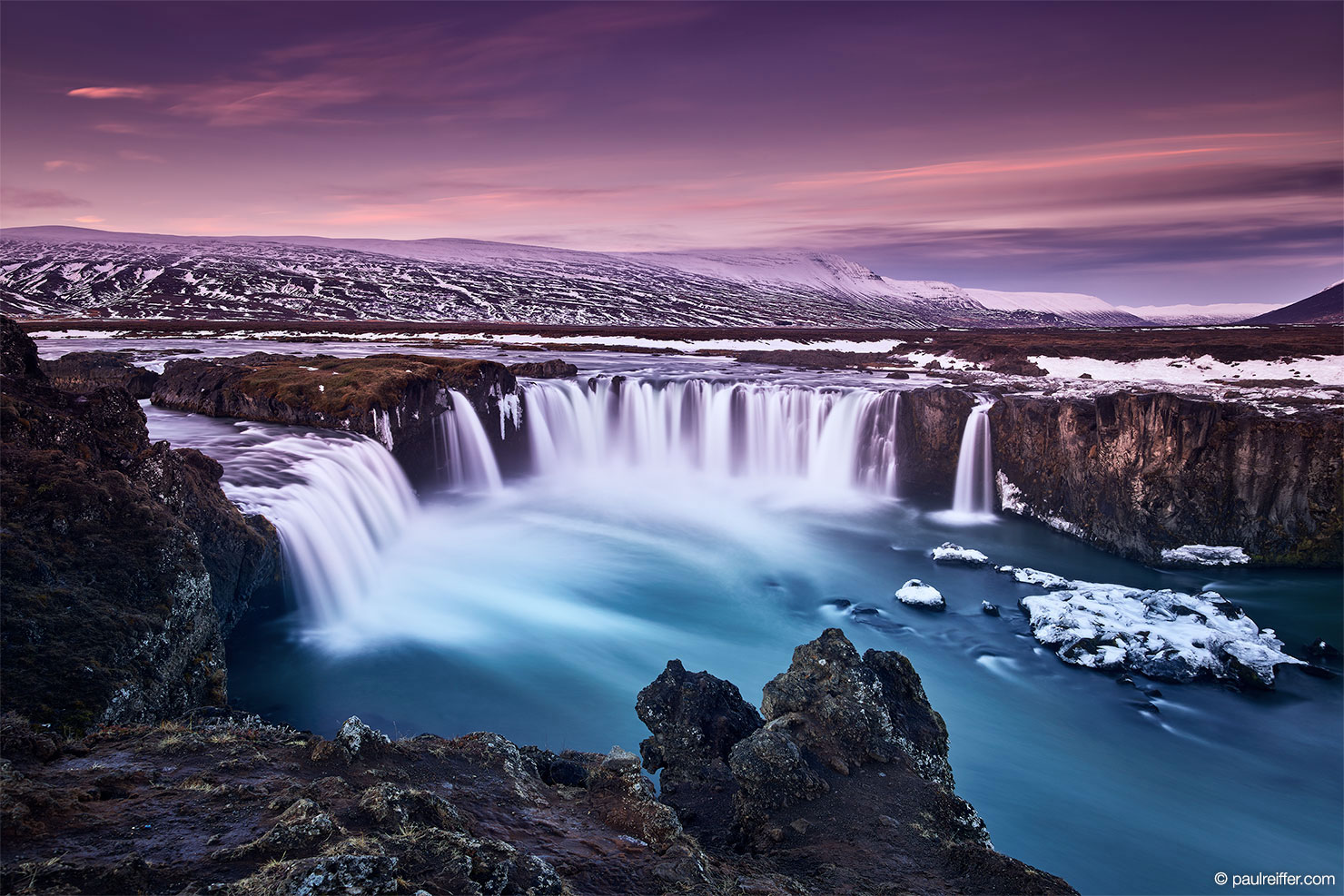 The temptation to crop out (or shoot forward of) the foreground rocks disappears quickly when you appreciate that these volcanic structures are what make Iceland what it is. The rich, vibrant, organic textures across these lava beds and basalt columns define this island – the waterfalls just give us a feature to focus on and capture our attention. 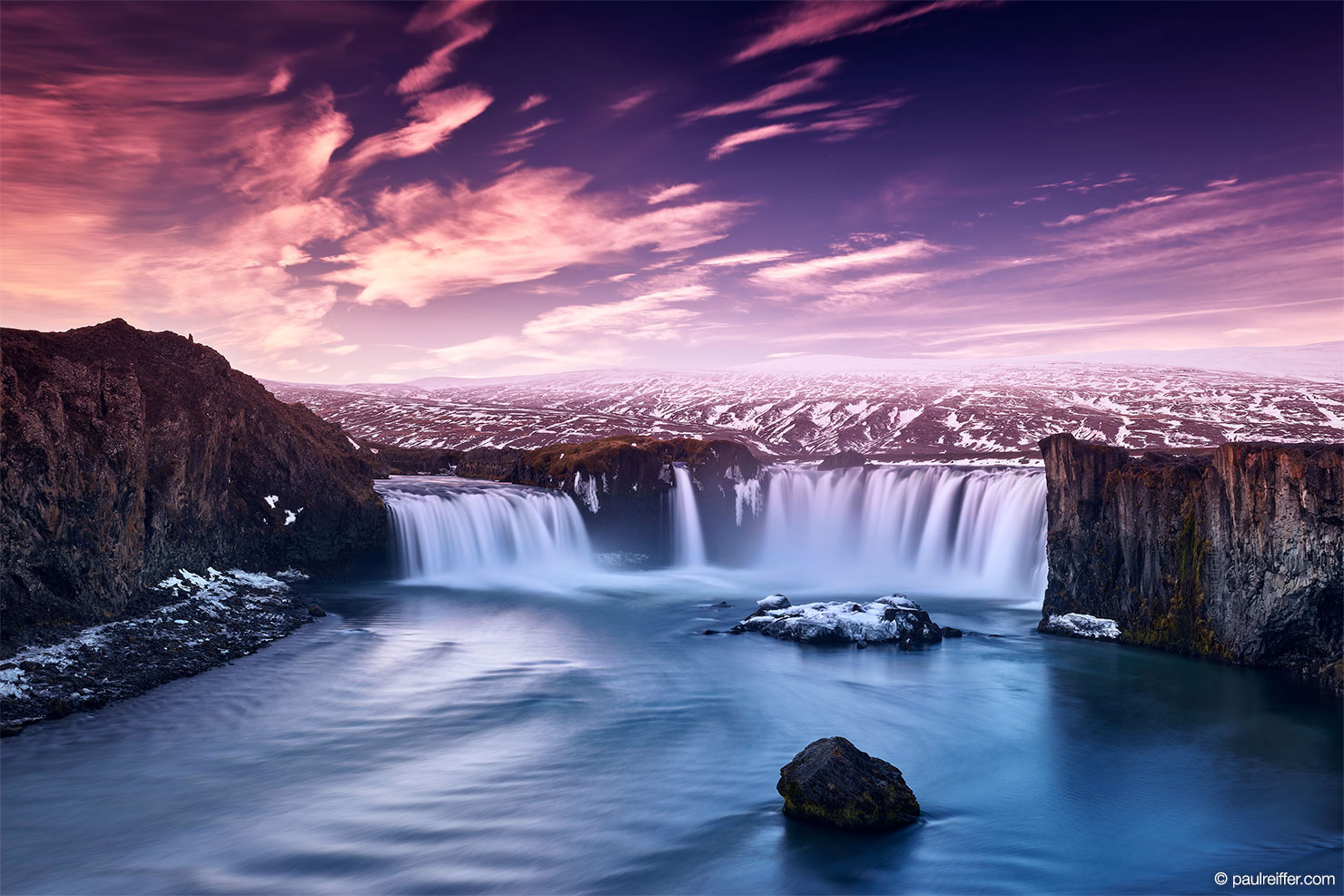 Sure, the north side view is just as impressive, but it also came with a lot more spray and challenges in shooting through a water-soaked setup – especially when trying to capture a long exposure. While the better-known “Godafoss” on the southern part of the island may grab more attention (indeed, Google actually replaces the word “Goðafoss” with “Godafoss” when searching!) for me, the lack of tourists, more remote location and scale of this stunning waterfall made it a winner for me.

So what else did I learn this trip? A few more things by day 5:

For me, Iceland has a truly special appeal. The locals here are some of the friendliest, kind, caring people I’ve come across – and the sense of community is amazing. Weather out here can be crazy, but that’s also part of what makes it so exciting to shoot.

While frustrating at times, it can equally be as rewarding when you do make it to that amazing location you’d been hunting for. It’s for that reason, mostly, that I’ll always have “one more thing” to shoot in Iceland.