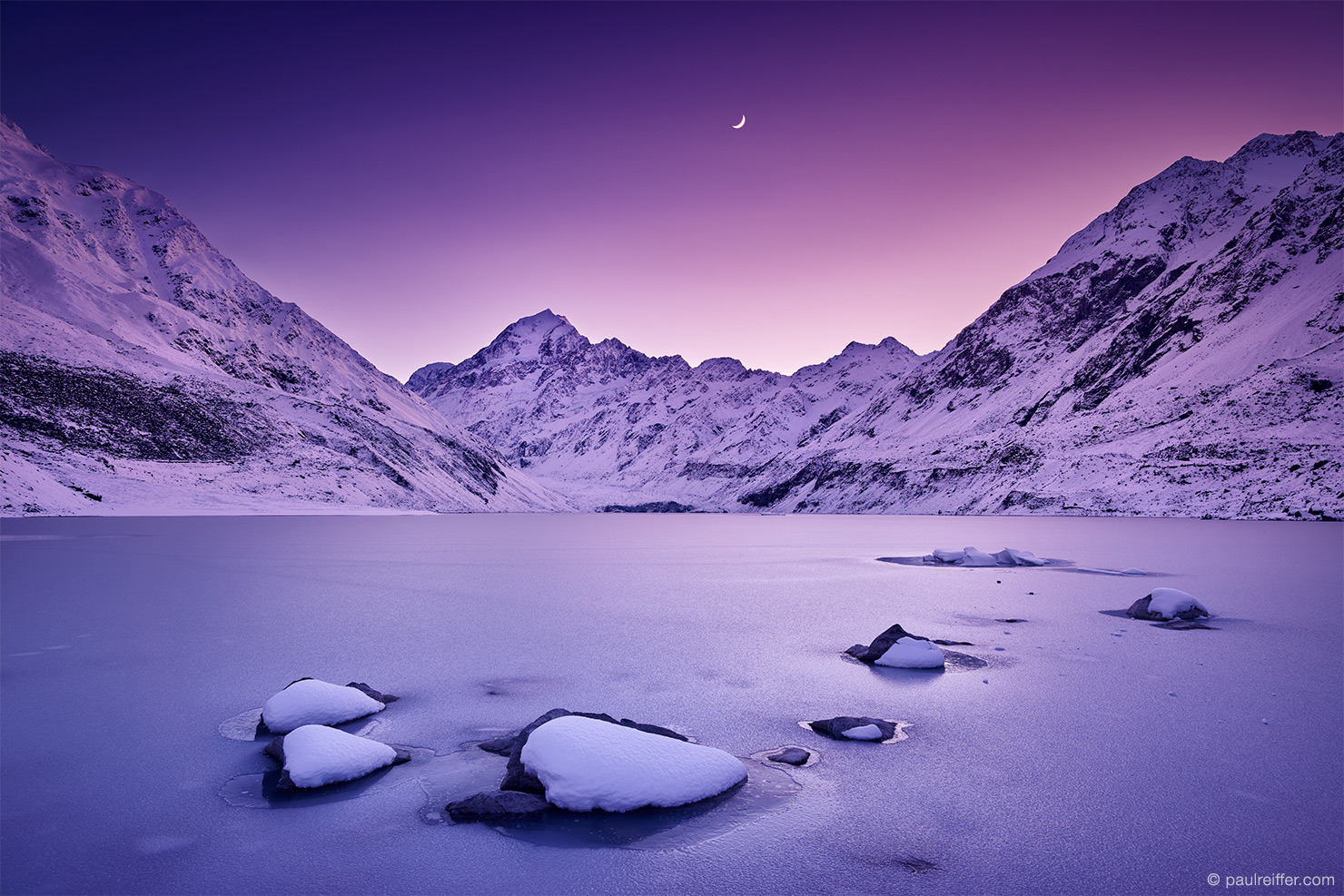 That brief moment, just before sunrise, when it’s no longer night – but the day is still yet to arrive – that was the moment when I captured this view of Hooker Lake, in the foothills of New Zealand’s Mount Cook.

Standing at 3,724m (following a rockslide which lost 40m in 1991), Aoraki Mt Cook is the highest mountain in New Zealand, set amongst the collection of peaks which make up the Southern Alps. As with most places in New Zealand, getting near is relatively easy – getting to the final spot, however, can sometimes prove a little more tricky.

When running workshops, I always head out with the team in advance of any students arriving to ensure the locations we’re going to use are still viable, and to see how the weather has treated them while I’ve been away. This was no exception; the recent cold-spell of weather meant the trails through Hooker Valley had been covered with a thick layer of ice and snow – so together with Vic, Mark and Wayne, we decided to check we could still use it to shoot the following week by doing a test sunrise-run.

Walking through the dark, across packed ice, to get to the frozen lake before sunrise meant cold hands, visible breath and (unfortunately) at least 4 slips and falls per person during the 1.5 hour trek to get to the spot I wanted. Slipping across wooden swing-bridges in the pitch black wasn’t on my original plan for the morning, but at least we would be prepared in advance of the workshop!

Our timings were spot on. Arriving just before sunrise, with a few stars barely visible, it was time to calculate where the sun would appear (even with only a few degrees of rise during the winter) and set up to capture the pre-dawn colours. As the sun streamed down through the valley, I knew the shot would become impractical, so it was the pinks and cool blues which appear before sunrise that I was looking to capture – and as luck would have it, they were there waiting for me.

With temperatures well below freezing, one-by-one, our phones stopped working; cameras began to shut off automatically, and our water bottles solidified. Pocket hand-warmers are always one of the most useful tools in my gear bag, and today would prove to be no exception as they were cracked open to keep fingers, cameras, phones and drinks just above freezing for the 2 hours we would eventually be there.

While floating glaciers are often a key subject in this location, it was the collection of snow-capped rocks in the foreground that caught my eye on this occasion. Clicking away before the colours disappeared, I knew I had a shot I was happy with, but it was great to be here and watch the sun slowly creep down the mountainside before heading back to the relative warmth of our camper van.

Looking back, as we walked across the three (now much more innocent, in daylight) swing-bridges, it was clear to see this was a location still worth the return trek, even if conditions underfoot were less than ideal in the dark.

So, imagine our surprise, when less than a week later we returned to find spring-like conditions as the entire South Island had stumbled in to a mini winter heat-wave. On our way back to the lake, during the day, it was almost t-shirt weather – gone were the ice-covered rocky paths, instead transforming into clear, sun-drenched walkways and flowing glacial rivers.

Arriving into Hooker Lake the second time, we found the famous floating icebergs heading towards the shore – with wind and water moving rapidly towards our cameras on the rocky beach. Clicking away, this was a very, very different (yet still spectacular) scene – but clouds were forming, fast, overhead – and knowing how quickly that could transition into a mountain storm at this time of year, it was time to get the group back to the warmth of the Hermitage Hotel.

…it turned out to be the right call.

Less than an hour later, the entire area was engulfed in a winter storm, full of sleet and heavy rain, temperatures plummeted, quickly turning water into ice on the ground. We all know mountains can be dangerous at times, and here was proof – being stuck 1.5 hours away, in a white-out storm, wasn’t my idea of a great way to end a workshop location – a good reason to always be prepared for any weather in such places.

The same location, the same season, 7 days apart and we had experienced the full spectrum of weather patterns during our time here. On a positive, the group’s images were stunning when we reviewed them on our return – despite the changeable weather. Plus, on our first trip, we did also manage to capture one other type of media: 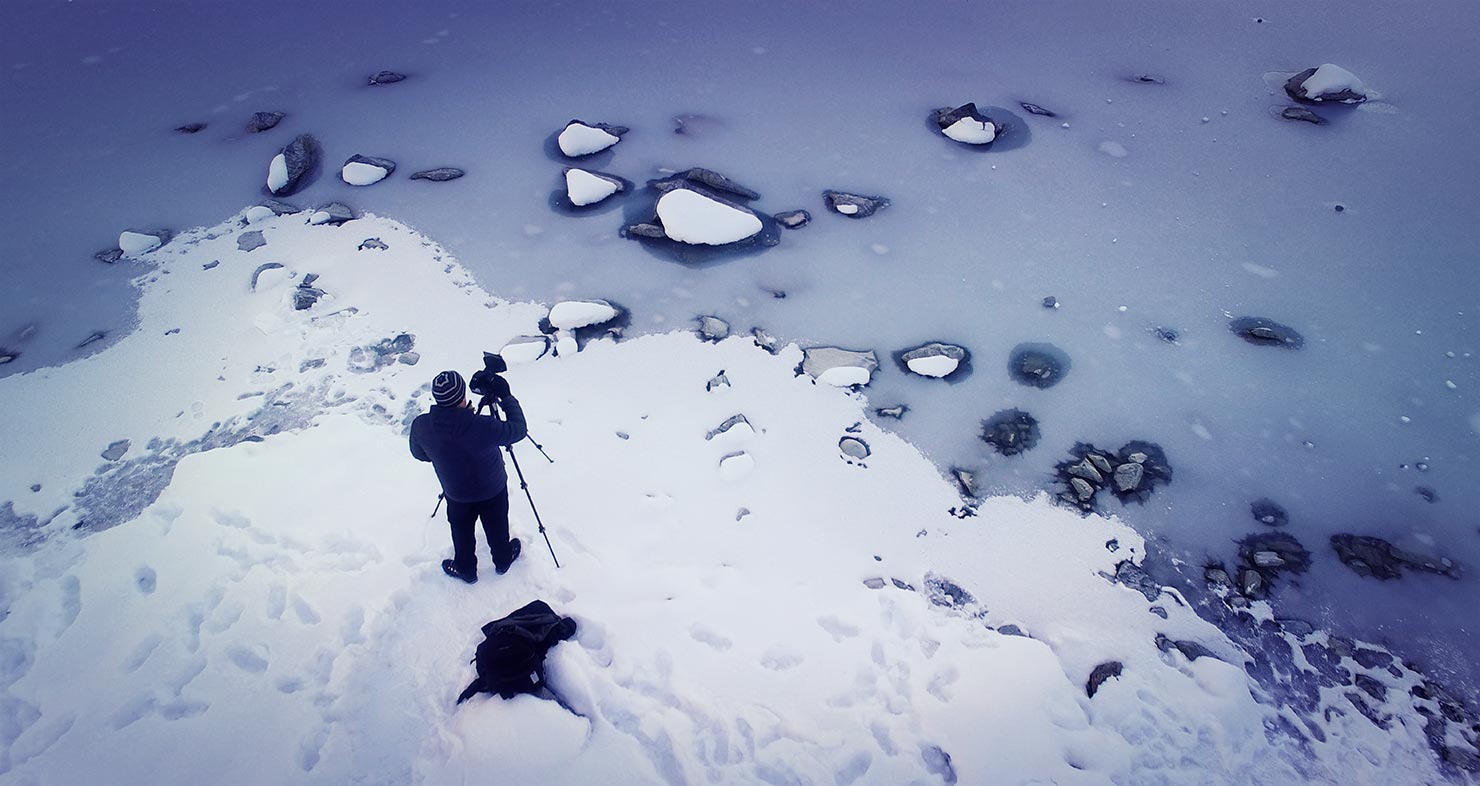 …some of the drone footage that will be released soon as part of my BTS series on shoots around the world.