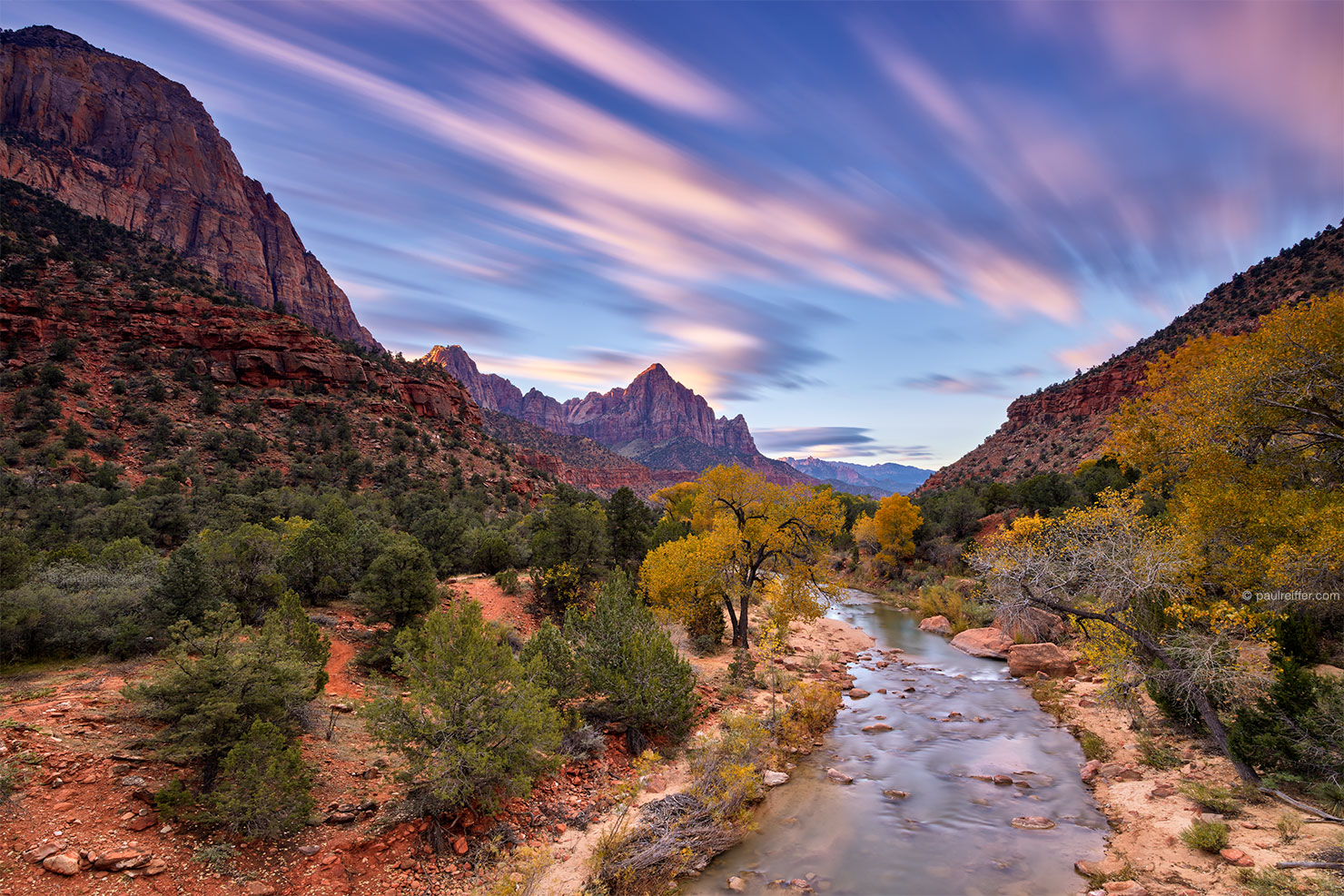 Zion – a National Park that I’ve passed many times, yet strangely never visited.

Heading in for just one night as we travelled the long trek from Jackson to Las Vegas, I was reliably informed that there was one key “sunset shot” that was worth heading in to at least try and capture. The signs of an unlikely shot were there – the weather was closing in, loads of people around in the late season, and a tired mindset after the days of travelling beforehand were not a good mix – but still, it was worth a look.

On arrival to the river overlook, with its view south across to The Watchmen, the signs of over-tourism (especially by us photographers) were instantly present. This narrow bridge (which accommodates the park shuttle bus every 5-6 minutes) became more and more crowded over the brief spell I was stood there – with a count, at one point, of 38 photographers and tripods all dangerously jostling on the road for their “spot” of this postcard view.

What started out quite promising, with hints of golden light just missing the towers, turned to stormy skies and heavy rain. Undeterred, the row of eager photographers remained in place (for fear of losing their spot), and the sound of desperate clicking continued despite the worsening conditions. This was just a crazy setup – and one that I’m sure will be short-lived, given the frustration of the bus drivers I saw each time on passing. 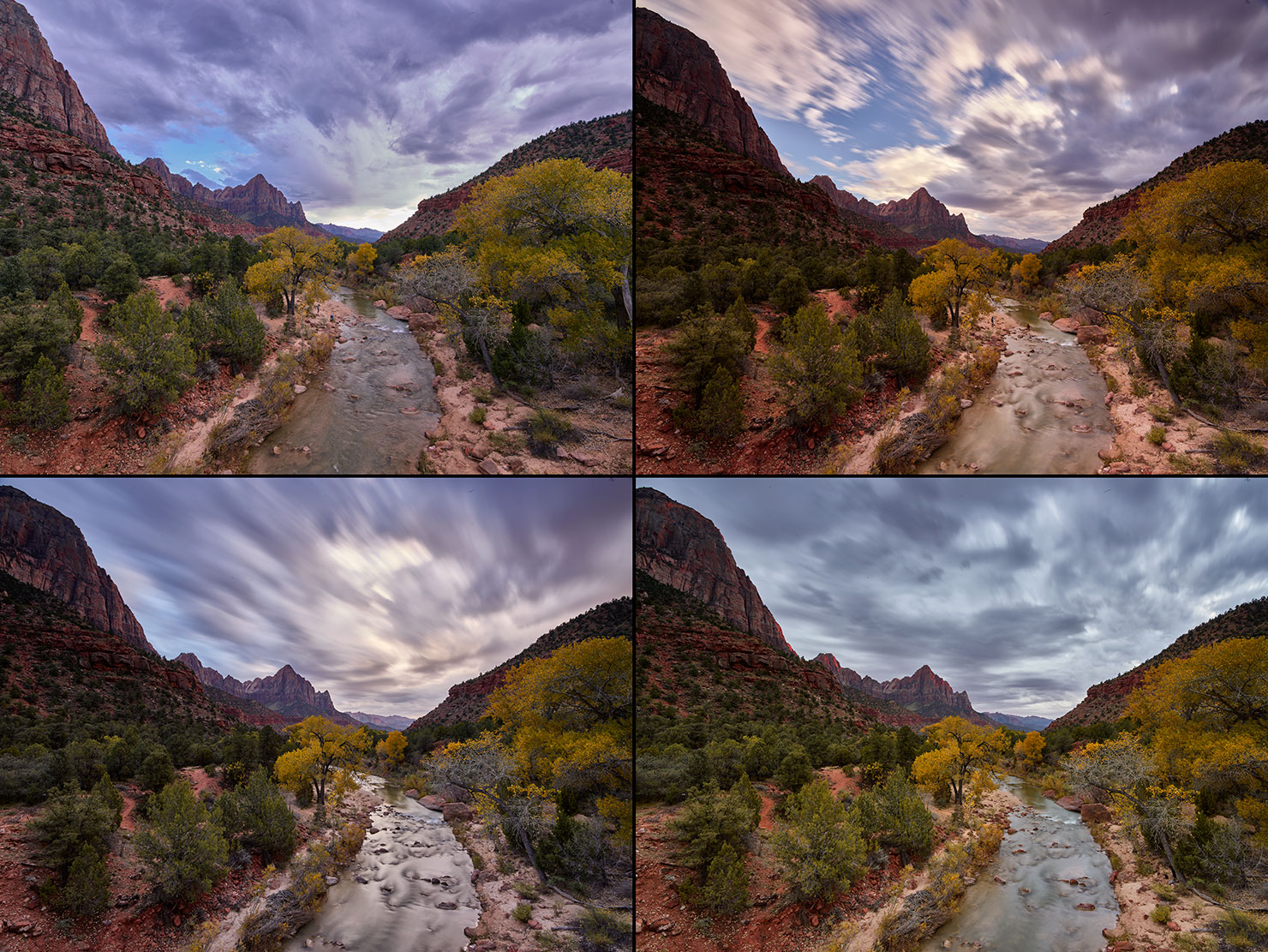 With a few images stored, it was time to call it a bust. The light certainly wasn’t going to get any better and the setup wasn’t exactly one I wanted to stay in place for any longer.

But what about sunrise?

I mean, this was “the sunset spot” for shooting, and everyone there seemed to have the same advice : “it’s not a sunrise location” – but how would I know that without trying? Plus, it would likely be a little quieter in the morning and I could get lucky with a bit of red sky over the mountains, right…? 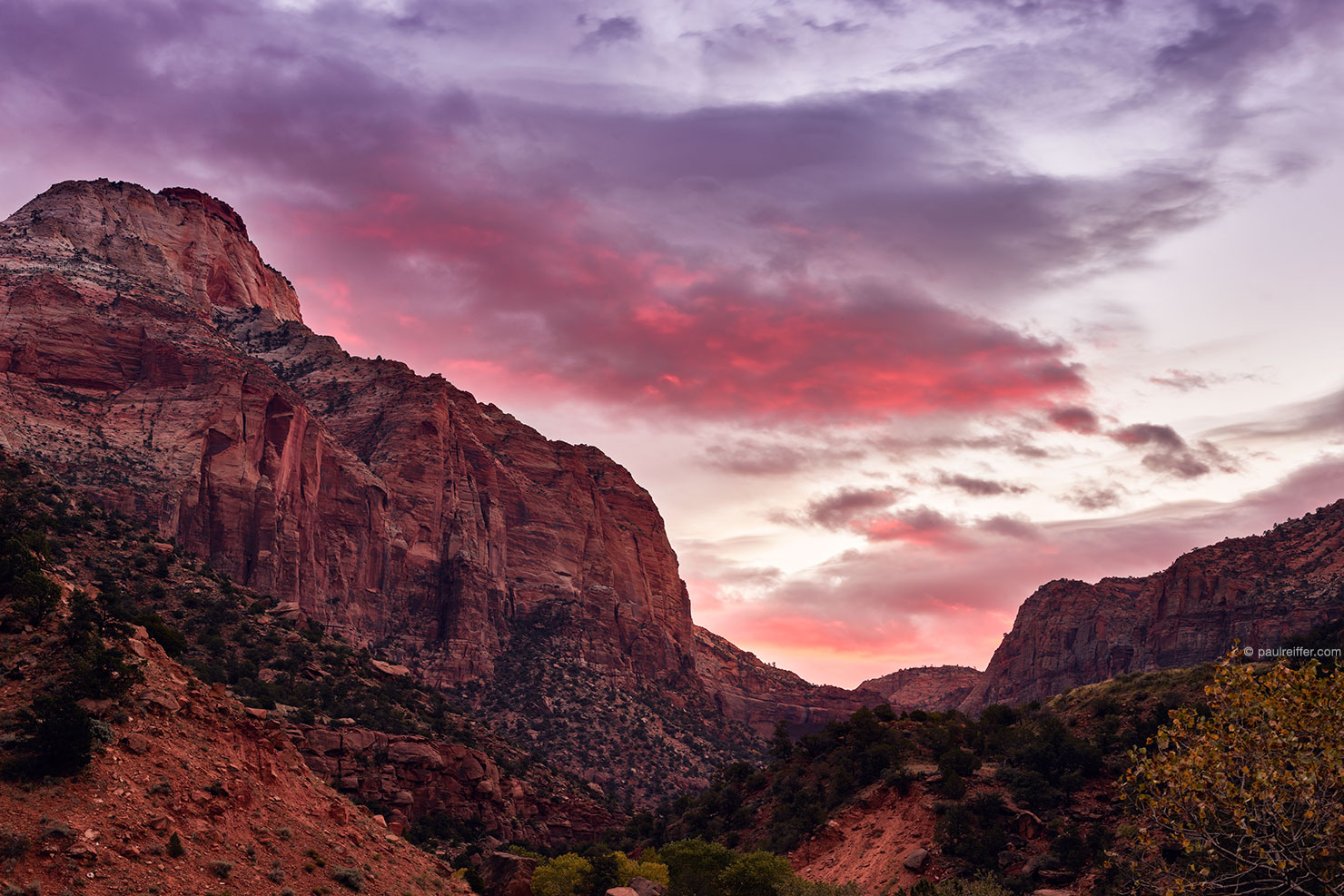 It was most definitely quieter, and while missing the blazing sunlight cast through the valley floor towards the camera, a softer golden glow began to appear down the river. To the left, the rich red sky as the clouds reflected the sunlight that had just begun to his the horizon. To the right, a golden glow of red rock shone brightly towards me – standing out in an almost Ayers Rock formation high into the mountains.

And then, purely through luck on my part, the tiniest slither of light managed to cast across the tips of The Watchmen in the distance as the sun finally broke free of the rock formation behind. The reflected glow of the (now bright) sky onto the river banks below highlighted the autumnal colours of the trees either side, and a long exposure captured the fast motion of the cloud movement above. On this morning, I’d truly managed to capture Zion’s “First Light”.

A sunset location? Sure. But don’t forget there are always two “golden hours” each day!

As for Zion, well, this is definitely somewhere I’ll be returning to shoot – especially when I can give the place some real, dedicated, time to explore…

Chicago from the rooftops : Carbide, Carbon and a little Hard Rock