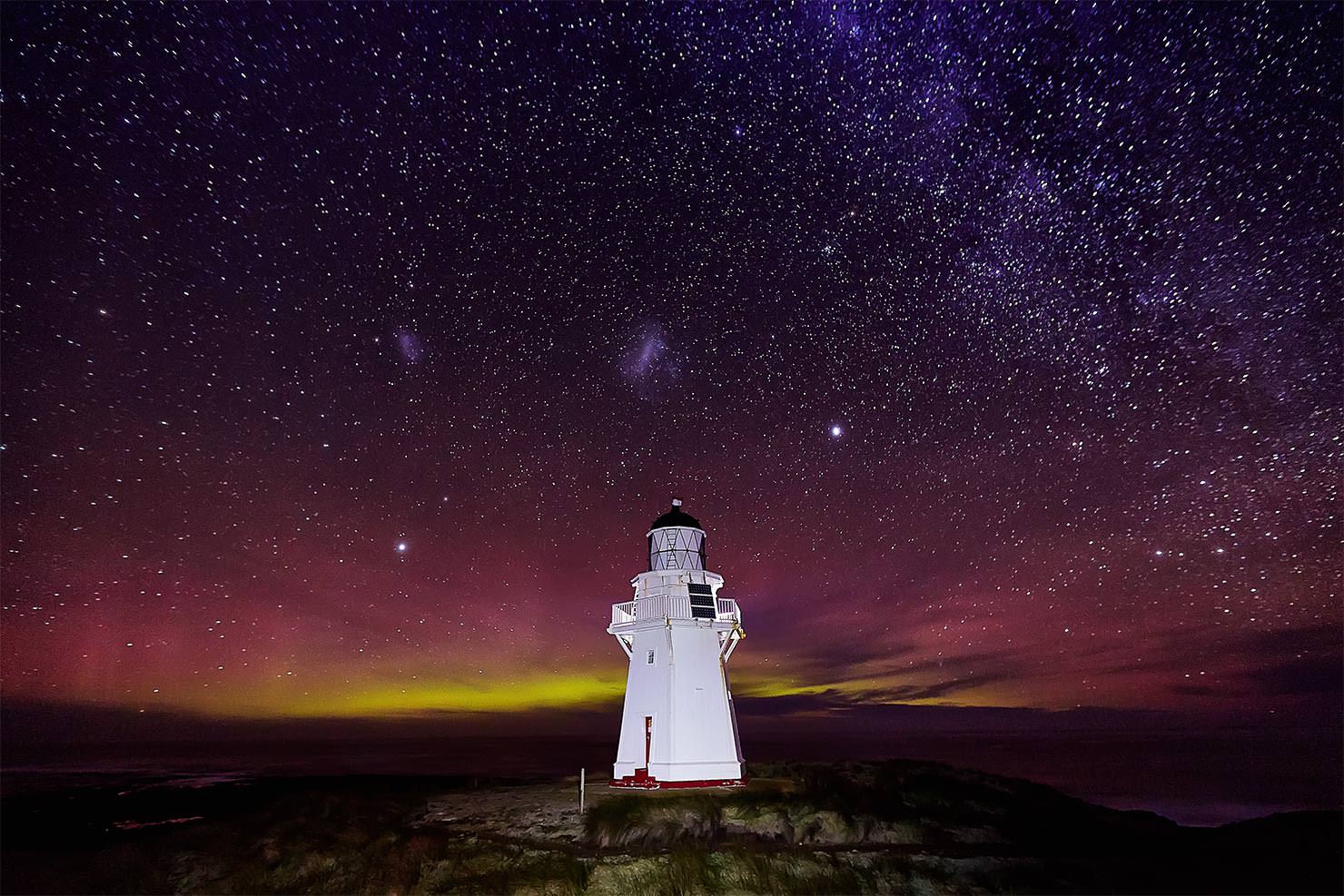 Seeing the northern lights (aurora borealis) in the sky above us is becoming an increasingly popular to-do list item, but despite being fortunate enough to have seen them a few times now, the lure of seeing the southern lights (aurora australis) during our time in New Zealand was just too tempting to ignore. 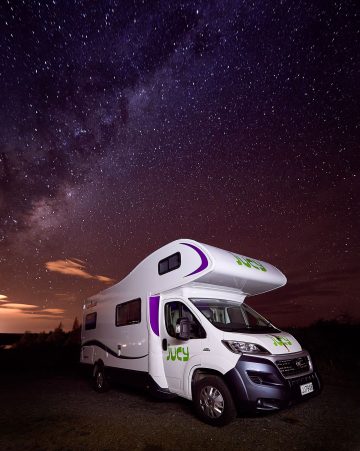 We’d been lucky so far, really, when it came to night sky photographs. While not my favourite subject, hunting for the right location, angle, time of year, can all add to the challenge of getting the right shot. While the settings are broadly very simple as I mentioned in my night sky guide (ISO1600-2500, f/2.8 or wider, 20-30 seconds, focused to infinity), the world looks very different when contrasted with our galaxy all around us up there.

On the one hand, Milford Sound had been a cruel location – clear skies are not what I needed in the day – on the other, during the night that clear sky turns into a massive positive. Although I would have preferred a tiny bit more moonlight to hit the mountain tops, the light-painting we did across the water in the shot below really helped boost the shapes from the foreground while allowing me to capture the long tail of the Milky Way’s galactic core.

Now, while not quite 5-star luxury, there is one huge benefit to a campervan that no hotel in the world can compete with : it can move.

Sitting in the tranquility of Milford Sound the morning after this shot, word came in that the Southern lights might just be putting on a show that could be seen from New Zealand over the next couple of days. That was a quick decision – the mobile Jucy studio got packed up and off we headed, to the bottom of the South Island and The Catlins. 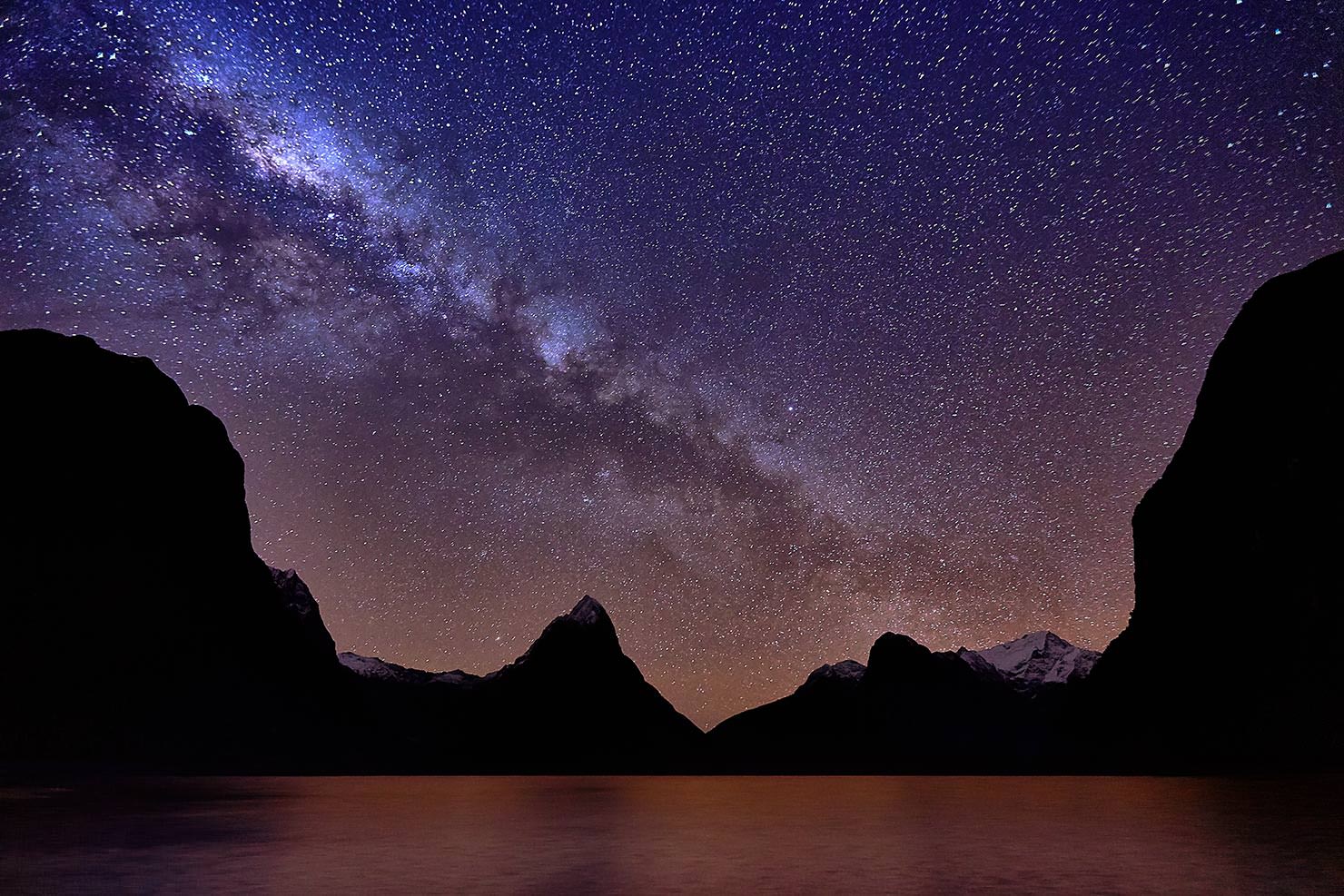 Arriving in time for sunset, the opportunity to shoot this old wooden lighthouse wasn’t missed, and neither was the sound of impending doom from a colony of giant sea lions just around the corner. Advice from a local couple told us that they tended to migrate up the hill towards where we wanted to shoot at night, so we needed to beware of any “rustling” in the bushes and grass if we were coming back later..!

After a brief spell back at a local campsite, it was time to head back out to the cold night air once more. On arrival, we weren’t alone – 3 or 4 others were at the same spot looking for the same scene, but everything indicated that we’d missed the show. 10 minutes later, however, was a different story – another storm had started up, raining new strands of light over the horizon to the south. 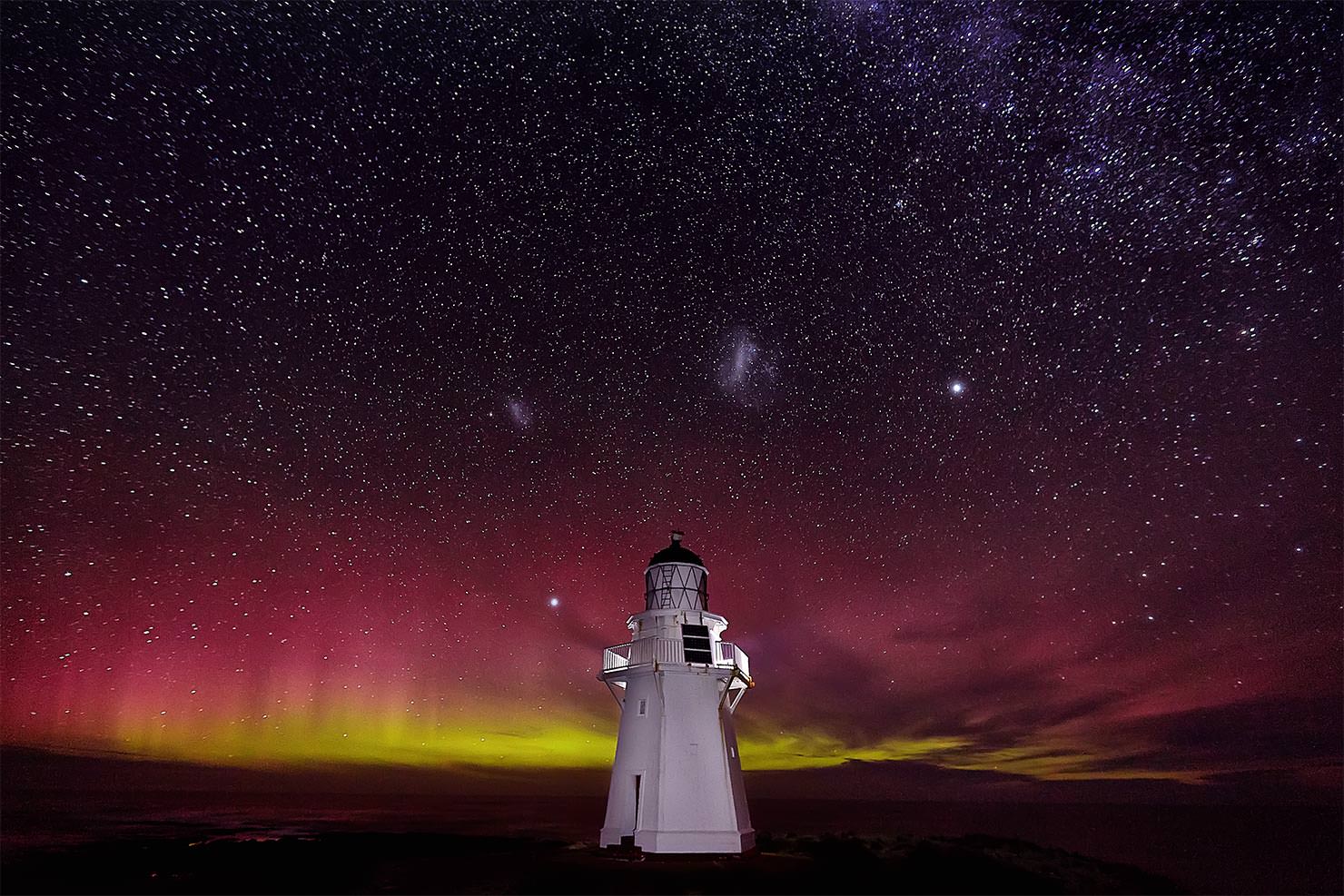 While it’s important to keep light levels as low as possible so as to not impair your vision at night, the lighthouse itself needed something to lift it from the background – a little light painting. That, and a slightly different position gave us a corner of the galaxy along with the aurora australis in the distance, providing the unique angle I wanted. 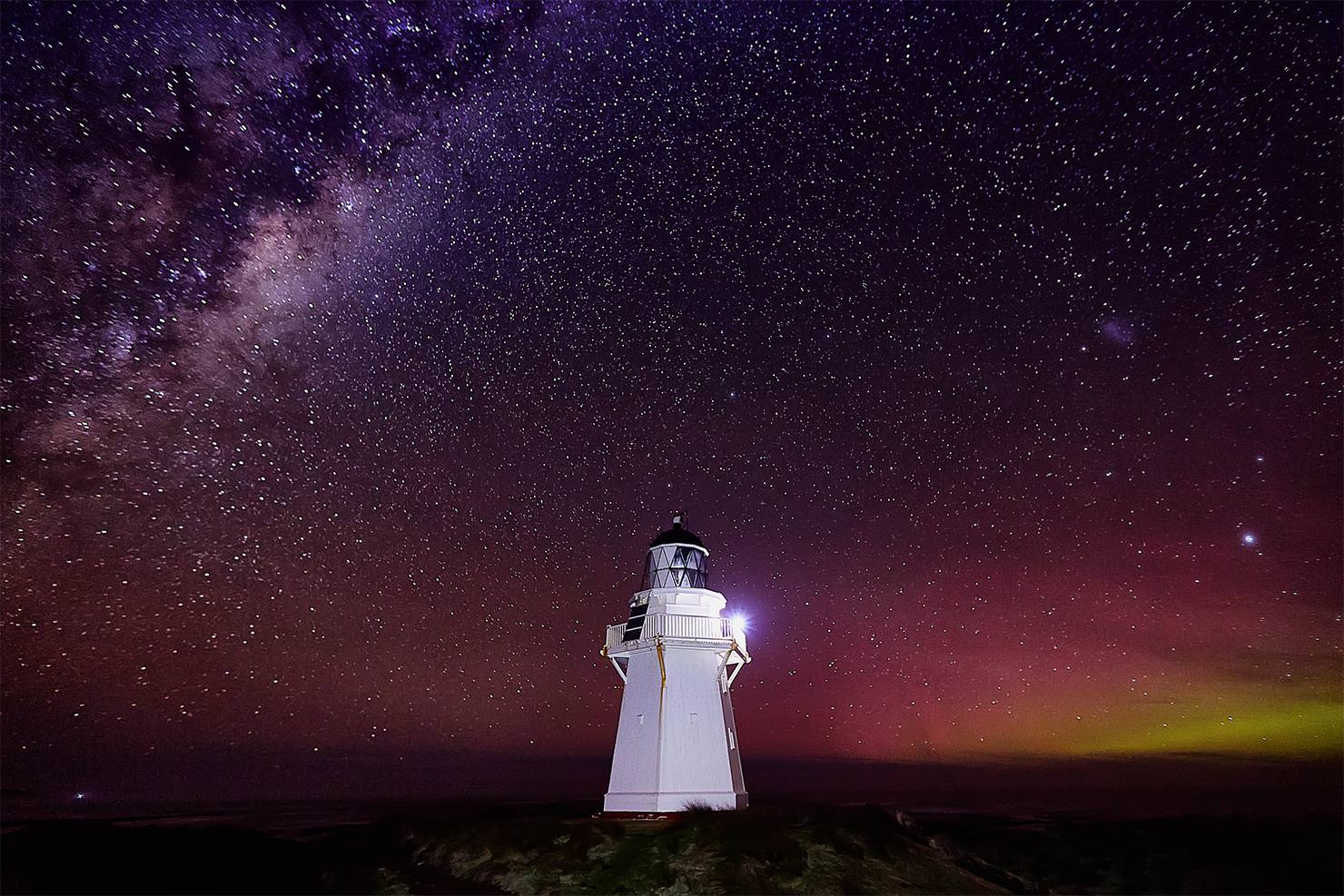 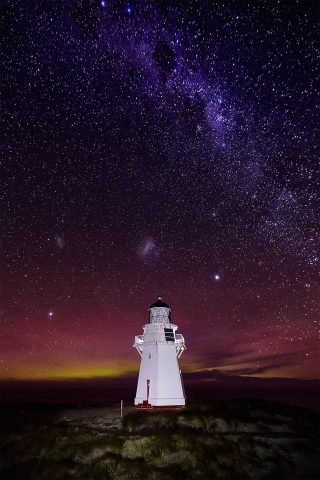 Sadly, while the lighthouse itself is old, the technology inside has been rapidly updated.

Gone are the long, sweeping, beams of light illuminating the sky in all directions – instead, a set of high powered LEDs that blink on and off in the prescribed pattern. They say this allows the lighthouse to run on AA batteries, rather than megawatts of power – saving money, maintenance, and ultimately the environment. Still, I can’t help but wish they’d kept the original rotating beacon (OK, even with an LED and mirrors inside) as it was.

Call me “old fashioned”, but a lighthouse without a long beam of light is just a hut with a torch in my view!

Still, this was more than an added bonus – seeing both the northern lights and southern lights in only a couple of months is quite some going.

And what of the other locations at night?

No visit to the south island is complete without a star shot over Lake Tekapo, and while I already have images I’m happy with, it was time for a revisit – this time for a wider angle over the lake and Church of the Good Shepherd. 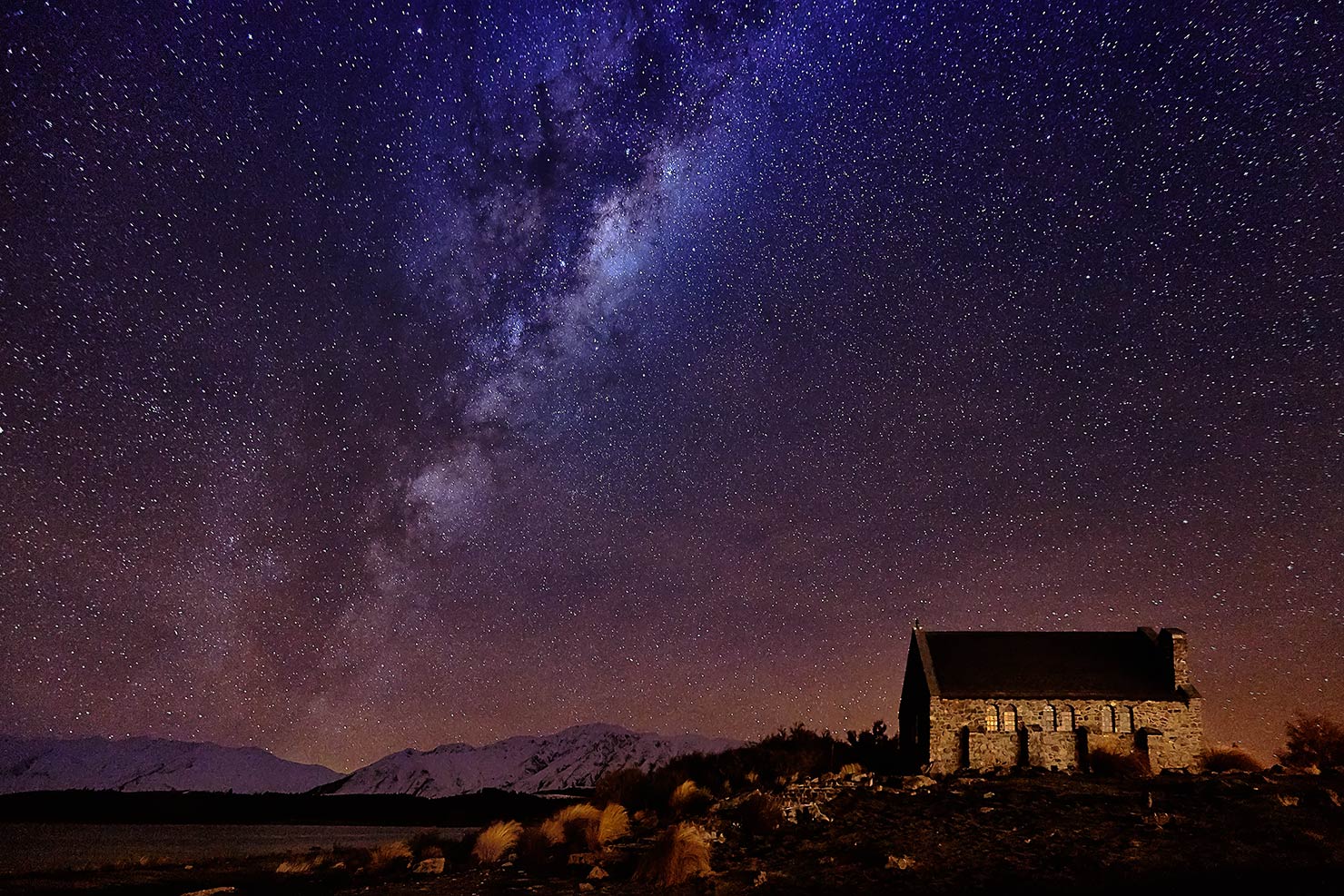 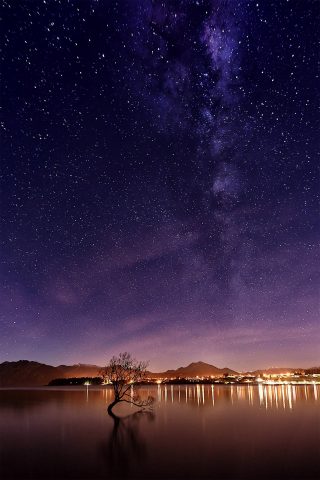 One of our nights in Lake Wanaka had also yielded some interesting star formations overhead, but with so much light pollution at ground level, it’s not quite the tranquil shot I would have hoped for.

Admittedly, the layers of low-level cloud on the horizon didn’t help matters, but regardless of which way you’re facing, due to Wanaka’s recent popularity more and more lights are hitting the town in every direction as you look across the lake.

I’ve seen several “stitched panoramics” of the night sky over that tree, with extra (let’s call them) “artistic enhancements” to make the lake scene appear more stunning while looking west, but I have to say I’m not convinced by this location at night. New Zealand has some amazing scenery, and I feel privileged to have seen as much of it as I have to date – but for star shots and the night sky, it really now is a case of getting off the beaten track and exploring the dark areas on our maps.

While not perfect conditions, I did enjoy watching this time lapse back from my attempt to shoot the milky way moving across the sky over Mount Cook. Sadly, with the moon rising so rapidly and popping into the frame, we lost the definition in the sky after only 90 minutes – but still, there are worse bits of scenery to enjoy…!

With that in the bag, I guess there were only two other things to enjoy and capture.

First, paying homage to the millions of instagram “travellers” who are “having an experience, maaaan” with their head-torches shining brightly up into the night sky. An easy shot, yes – and only for a joke. But no – I’m not “painting the stars”…!

And second, but more importantly – a combination of light painting practice and a reminder of one of New Zealand’s most famous food options. Welcome to the land of pies. 🙂

Thinking outside of the Box : Kuala Lumpur from Above