As part of my post last year, I briefly touched on the growing number of “photoshop-ographers” in the industry – a worrying trend which is creating a void of necessary in-camera capture skills and knowledge. This is where people are instead opting to “fix things later” (often fabricating reality), publishing fake scenes while claiming them to be photographs. In this article, I want to explore the challenges we face as a result of this apparent shift in what is becoming more acceptable to our viewers.

“Has it been photoshopped?”, was the question from one of the guests, pointing to one of my prints at the opening of our new pr@hf gallery in the Maldives. An innocent enquiry, but one that sent shivers down my spine – for the answer all depended on the customer’s definition of “photoshop”.

“Has this been corrected in a computer for colour, white balance inaccuracies, sensor dust-spot removal and fixing that bit of discarded human trash from an otherwise tranquil scene?” Yes, it had. But we can generally accept that this was not the definition of “photoshopped” the customer had in mind – the more likely meaning was “has this been faked?”

Now, let’s be clear here – ANY photographer who brings their image into a computer, whether for colour correction, dust/scratch removal, white balance changes or the odd bit of trash to be taken out of the scene, by the generally accepted definition, has in some way “photoshopped the image”. So, the only honest answer I could give was “yes, of course – they’ve all been corrected for minor things, but I always ensure the scene that is printed is as close to the image that the camera, and I, saw at the time.”

This suspicion is now so widespread, as a result of people abusing the fantastic tool that Adobe have developed, that I often post “What I See Right Now” images from my iPhone, as behind-the-scenes shots to demonstrate that the scene is accurately portrayed. Yes, glass filters are placed on the front of the lens to even out exposure or allow me to keep the shutter open for several minutes etc, but I take pride in ensuring the image I capture is accurate in-camera and not faked in the way that’s now become so commonplace to see. 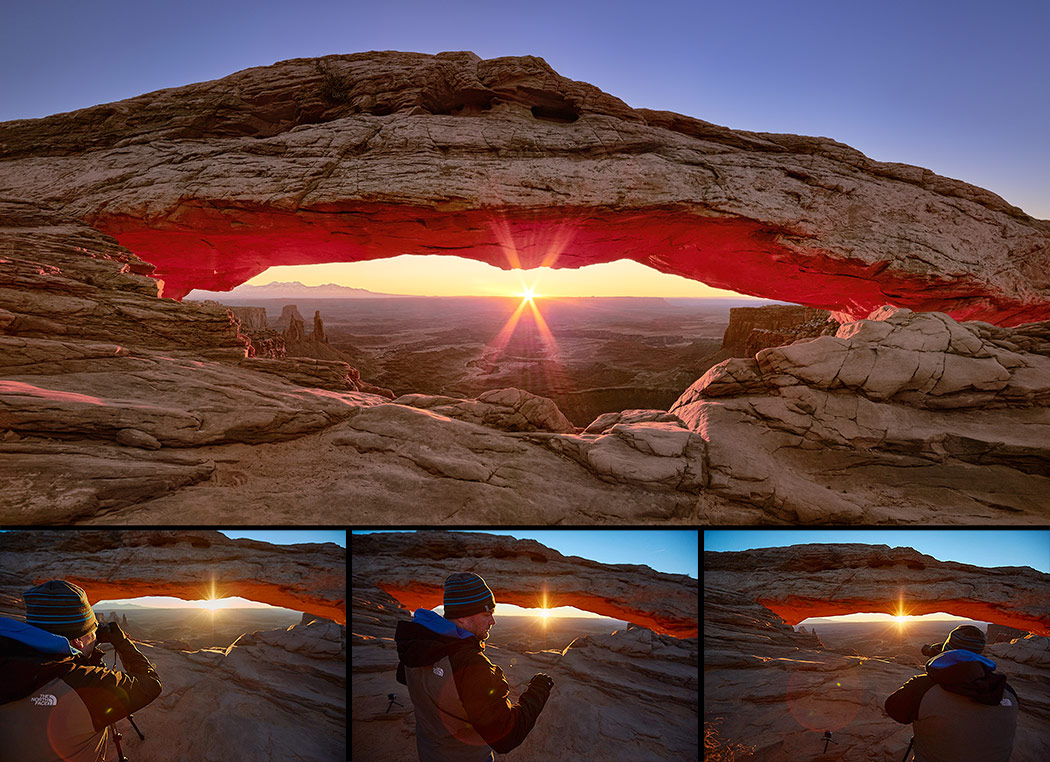 In different genres of photography, of course, this becomes even more important (and even the basic editing I referred to above would not be allowed). Take, for example, the 2013 World Press Photo award-winner being stripped of his title, or the decision by Reuters and others in 2015 to ban the use of any image that could have been “enhanced” after it was shot. In press photography there is becoming an absolute line which must not be crossed – in landscape photography, however, maybe it’s not quite so obvious where that is.

So, given the importance of image integrity to those who appreciate our work as photographers, I was amazed yesterday to receive two pieces of marketing material that really did go against this stance – including one from Adobe themselves:

Before I go any further, I want to just highlight two dictionary definitions:

“a picture made using a camera, in which an image is focused on to light-sensitive material and then made visible and permanent by chemical treatment, or stored digitally.”

“a person who takes photographs, especially as a job.”

The key part of those definitions is the very first few words – “a picture made using a camera“.

So, that doesn’t mean “capture some detail with your camera and then turn it into another image entirely, later on, using a computer”. Nor does it mean “if you didn’t get the sunset you wanted, or wish to add the entire galaxy into the scene, just grab those images from somewhere else and blend them in later”.

No, it means, by definition, a photograph should be representative of the scene that was captured by the camera at the time.

There are obviously some grey areas around this, and many will cry “but people have been dodging and burning in the darkroom for decades, centuries, even”, and I agree. But the challenge in my mind is whether a digitally (or chemically) manipulated image is indeed still a photograph – or instead, has it become a piece of fictional art? For the record, I have no problem with either style – I’ve seen some absolutely stunning pieces of digital artistry from people far more proficient in tools such as Photoshop than I am, but I don’t accept that these masterpieces of technical wizardry should be called “photographs”.

Increasingly, I see the words “creative blend” and “composite” now used to happily describe surreal (yet impossible) scenes, captured by “photographers” across many digital platforms. But if, by definition, photographs are intended to record and capture the scene before the lens – then, by definition, a scene made up of 3, 4, 5 different elements (some not even captured in the same location) is no longer a photograph. In the image above (don’t worry – I’ve intentionally made a bad effort at removing all of the faked items from the right hand side!) it was never physically possible to capture that setup with sunset, light rays, the Milky Way, clouds, and a reflection that doesn’t match the sky above.

So why is it becoming so popular? Well, in part, because the bar of reality is being shifted to an unachievable level by photographers. The strive for the “even more impressive sunset”, along with advances in digital tools and the desire to win popularity contests on platforms such as Instagram is pushing people to create more and more outrageous images and publish them, with the expectation of awe and appreciation by millions.

The problem is, we’re setting ourselves (as humans) up for failure. Tourists are now visiting amazing sites with unrealistic expectations of what should be before them. On my last visit to the Grand Canyon, I actually heard a guy (as he looked up for 2 seconds from his iPhone) say “is that it?” – in part, I’m sure, because the images he’d seen online before visiting had promised him so much more.

While I accept that the Adobe Photoshop banner ad above was simply advertising the fact that you can “fix” some things after taking the shot – why are we not focusing more of our time educating people, through workshops, on how to get it right in the first place? Polarising filters, Graduated ND filters, the correct exposure settings, learning about light. For a start, it’s so much more efficient than having to go back and fix mistakes in the original image – more importantly, it takes us back to capturing a scene with a feeling of accomplishment in what we’ve recorded.

The second email I got was from a software company that have produced possibly one of the most disturbing promo videos I’ve ever seen for a “photographic” product. With its innocent and happy background jingle, this video goes on to show how you can add different moons into scenes with “one click” – change seasons of a photograph – add in light that wasn’t there – stars – even a flock of Canadian geese…

Further, it takes around 1.3 seconds on Google to deliver a billion results on faking images – including “how to create a fake lake and reflection in photoshop” (because every image of a field needs a lake) or “how to create a colorful evening sunset” (that was never there) – and for those who enjoy creating fictional images, I’m sure they’re useful guides.

But wow, is this what we’re now looking for in the images we see out there? How truly sad if that is the case.

It’s funny (and unfortunate) how the fantastic software product “Photoshop” has also become a verb – “to photoshop something” is commonplace, and we’re generally now using that word to mean “create an image that is fake”.

In the same way knives, on their own, can’t be held accountable for every stabbing in the world, it’s equally not fair to hold Adobe responsible for every tragic example of fake photography that’s being broadcast around the Internet. It’s my belief that our challenge, as both photographers and viewers, is to draw the line between photography and digital manipulation and start being honest with those who appreciate our work.

If it was a piece of clever digital manipulation – say so. I can appreciate a work of digital art just as much as I can appreciate the effort that goes into capturing a photograph correctly in the first place.

But please, to the real photographers out there:

Oh, and as for that top image – well, I’m SURE I saw a unicorn dancing across the sky at sunset with the full galaxy of stars on show during the largest moon of recorded history… You’ll just have to prove I didn’t. 😉

Given the timing, I thought it worth a quick update to show that people-power really can make a difference when it comes to false images. Following a rather amusing trail of social media parodies of the shot in question, the winning photo in Nikon’s monthly “Nikon Captures” competition has just been stripped of its title, due to being a composite of two images, not an actual photograph.

While many are actively degrading the winner – Chay Yu Wei – let’s not forget that he’s not alone in this practice of convincing others that a fabricated image is real.

It’s now down to us, as customers and photographers, to educate ourselves in the differences and make sure we know what we’re looking at. For the photographer in this case, well, I guess he got his 5 seconds of international fame (however unwanted) which might make up for the fact his prize of a Nikon trolley bag is apparently being recalled…! 😉