I sit writing this with a smile on my face, as I’m about to link to the most unique headline I’ve ever read: “A Frog Riding a Beetle: Is This a Real Wildlife Photo or a Bunch of BS?” 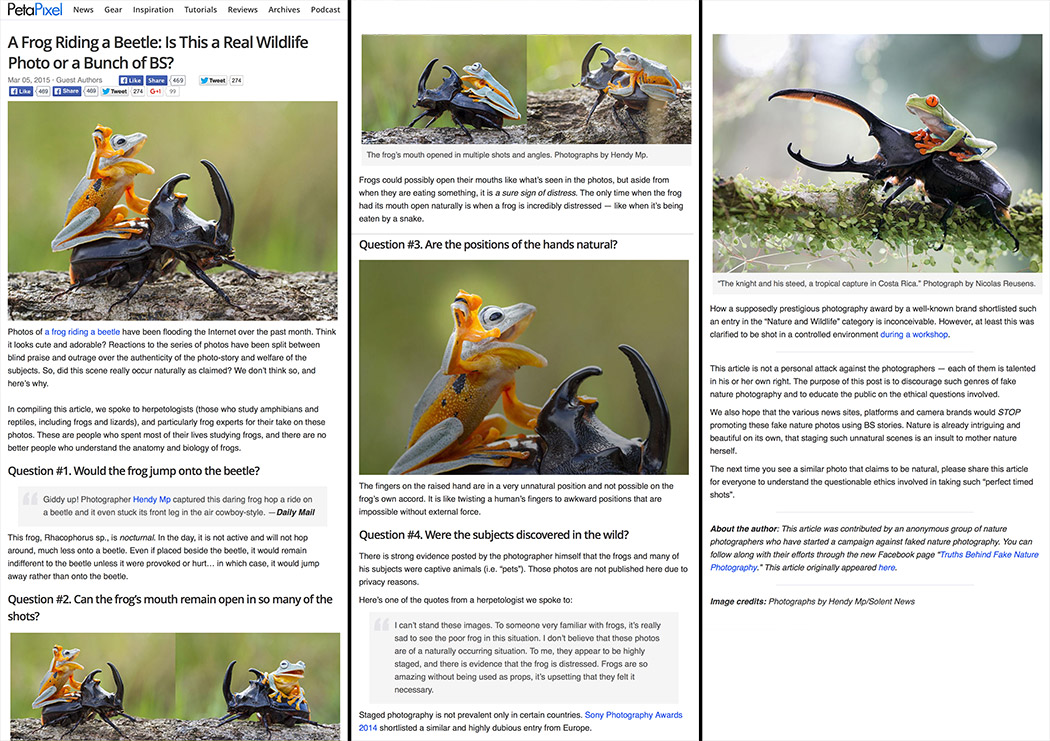 Reading that article, as well as looking at the claimed “perfectly timed” shot from last year’s Sony World Photography Awards, it brings back the memory of a story I read recently about the cormorant fishermen in Guilin – a place I also visited when I lived in China. The article was about “the dark side of photography”, and while it appeared a little too sensationalist for some to let go (rebuttals followed across the Internet by others who claimed more insight into the practices in China); I can say from first hand experience that there most definitely is a dark side to photography in that location, and one that needs to be discussed, understood and in the long-term, fixed.

For disclosure, this is the first post I’ve ever written that features none of my own images – to demonstrate the issues I’m talking about, I’ve had to license some stock images for illustration, meaning the photographers have received payment for their use below.

Before we go deeper into this subject, let’s just look at the literal definition of the word “photograph“:

“a picture made using a camera, in which an image is focused on to light-sensitive material and then made visible and permanent by chemical treatment, or stored digitally, in order to capture the scene before the operator.”

So, with that reference in mind, what do I mean by the “dark side” of photography? Below are my four golden rules: 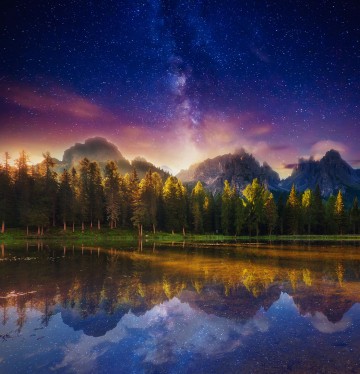 To some, it’s that evil word they cry on seeing something that seems unreal: “Photoshop!”.

To me, there is a massive difference between a “photograph” and a piece of “digital art” – and both have a valid place in the media we consume. That said, despite my acceptance of both genres, I do believe there is a line that is very often crossed – where the creator is claiming to have captured “reality”, but in all truth, there is nothing real about that one shot.

Star/Astro shots of the Milky Way, claimed to be taken at sunset with the orange or pink glow in the sky are a good example of this – they’re simply fake (they were never captured as one image, it’s a mix of more than one shot).

Granted, “blending” has been going on for years, well before the existence of digital tools such as Photoshop (and it sounds so innocent, right? – “blending an image”) – it can produce some impressive results too. However, I do wish those who were so skilled in this technique advertised the result as exactly that: an artistic method to make a wonderful image. To me, these are not photographs. 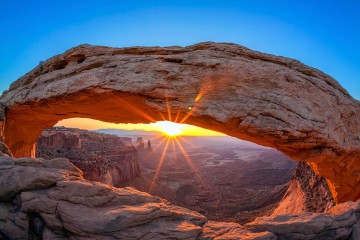 We’ve all been there – having been up through the night to get “that shot”, we’re primed and ready for the sun to appear – only, before the sun gets there, another 20 photographers (and a bus full of tourists) all arrive too.

So let’s get one thing straight – you own the copyright to the image you capture with your camera; you do not own the view itself! It can be frustrating, I know, and as a generalisation of our profession, photographers all seem to have a tendency to believe for some reason they are more “deserving” of the primary viewpoint. After all, we earn a living from that image, those pesky tourists taking selfies everywhere don’t, right?

Well, yes and no (and admittedly, this is easier said than done!) – but the key thing here is to just relax. It’s a bit like sitting in traffic on the freeway – you can spend 15 miles with an elevated blood pressure and rage building up against every other person in the same situation around you, OR, you can get where you’re going at the exact same time, but relaxed and calm, knowing it was out of your control. 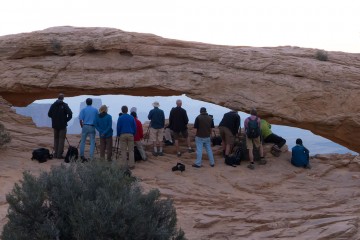 Let’s look at that shot of Mesa Arch in Canyonlands – congratulations everyone, as photographers we’ve managed to make this place look so awesome that everyone wants to go and visit! But oh, wait, everyone now wants to come visit…

a) get upset at every other photographer trying to “muscle in” on our territory as claimed by our tripod legs + 6 inches in every direction? or

b) realise that everyone is there to witness the awesome view, many to capture it also, and enjoy it together?

In the same way I’ve seen the extremes of ignorant tourists walking straight in front of somebody who was clearly putting in a lot of effort to get that a once-in-a-lifetime shot, I’ve equally seen photographers treating tourists like dirt as they simply enjoy the location they’ve travelled for miles in order to see. Come on guys, we all share these places, views, sunrises, sunsets – nobody owns (or deserves to capture) these amazing views any more than the person stood next to them, so please let’s stop thinking we do. 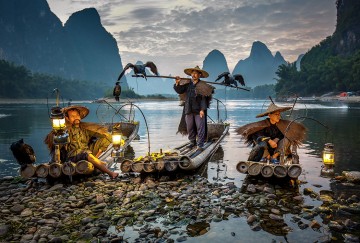 Let’s go back for a moment to those images I mentioned above, from a few months ago – specifically the Cormorant Fishermen of Guilin in southern China. I’m going to tread carefully as it seemed to cause a bit of (ahem) “discussion” between those who had been there personally, and the original author of the article, but I do have to side slightly towards the cynics instead of those claiming the images capture the local people in their own environment. And yes, that’s coming from the perspective of actually visiting the place myself.

First rule in my mind: If I have to create a so-called “authentic” situation, it’s not authentic.

Of course there will be those who cry “unfair” at this statement, but sorry, it’s true: If your job as a photographer is to capture people in their natural, native, state – that cannot involve contrived situations and orchestrated setups.

For transparency, yes, there are a few genuine old-time Cormorant Fishermen on the Li River in Guangxi, but they can be counted on one hand. What I saw, when I was there, were probably 20-30 actors (who may or may not have once been fishermen, but have clearly decided this is the better career). They were all out on their rafts, which in some cases were actually plastic tubing, yelling at photo-tourists and bartering on price. Each was claiming a “per shot” charge to steer out into the river with their bird (who, yes, sometimes gets held by the neck and dunked in water to force it to spread its wings and dry) so that you could click away from the shore. If you wanted the iconic shot of them throwing their net across the water – that was an extra charge – but hey, “you got the shot”, right…?

Taken further, I recall my trip to China’s fake London – or “Thames Town” and the ridiculous lengths that people were going to in order to get their fairytale shots in front of a British church green. Only, it’s not. It may as well have been done in a studio.

While it sounds like this is a Chinese problem, I can assure you it’s not – there are horror tales all around the world. Of course, part of “art” is creativity, and I love that. But can we please, please, stop claiming that these shots are capturing the reality of the local environment and people who live there? 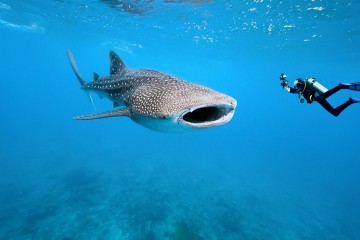 I was lucky enough (in many ways!) to go swimming with Whale Sharks last year, and honestly, the experience was amazing – for a brief moment.

These giant, harmless, creatures are one of the largest animals on the planet, weighing up to 30 tonnes and with lengths as long as 14m! So, why did my experience shift from being amazing to being concerned?

Well, let’s look at that picture of the diver there. It’s an amazing image, giving a true sense of scale of these incredible sharks. Look how serene it is, how gracefully that animal is swimming through the ocean. Now consider the hundreds of people who, having seen such images, go to a very small number of places in the world in order to witness the same for themselves every single day. It’s a crazy hive of activity with clusters of around 20 boats (with moving propellers) all skimming around the same part of the ocean in order to “drop in” on the sharks as they pass through a narrow point of water.

Now imagine how that shark feels, minding its own business, it gets constantly dive-bombed (literally) by hundreds of people at a time from above. It’s not serene, peaceful, calm (or, in my opinion safe). It’s chaos, and (granted) without being able to directly ask the shark for their opinion, in my view quite harrowing for the poor animal as it tries to pass through. Would you be happy if a load of animals stormed into your back yard, all holding big black boxes, shoving them into your face with complete disregard, all in the name of “recording you for others to see”?

The same ethical issue applies with things even as delicate as coral in these stunning locations – there are horror stories of photographers actually moving coral around the sea floor to “make the image right”. Or in forests, I’ve even witnessed first hand the complete destruction of a tree that was “in the way” of a photographer’s (otherwise “perfect”) frame.

So why am I writing this?

Well, in part, it’s a reminder to myself. To chill out, to relax, to remember that photography should always be enjoyable. Sometimes the experience of not getting the shot is just as valuable as the pride you feel when you do.

But it’s also a note to us all – we are only here on this planet temporarily. We don’t own any views. There are creatures who have already lived here longer than us, and will continue to outlast us all, well into the future. I speak to many photographers who all seem to have read-up on “their rights” etc, but what about the rights of all the other people around us while we shoot, the animals that we share the planet with, the natural environment in which we live? Don’t they have “rights” to be left alone and enjoy their existence too?

As photographers we can bring smiles to peoples faces by showing them the wonder of the world from miles and miles away. Let’s just make sure we’re capturing what’s actually there – not creating (or worse, destroying) the very scenes we’re asking people to enjoy.

And when it comes to “processing”, I’m sorry, but Photoshop should not be a weapon, it’s a tool. As a digital darkroom, it provides us with an amazing array of features that can save time, “fix” small errors in our images, and digitally change the “feel” of what we capture through white balance, colour and saturation, but at some point (by definition) an image stops being a photograph.

Let’s all try to remember where that line is, and at least attempt to stay this side of it.

Making the shot - Meat Bo : Behind the scenes at Shangri-La