As always, the most frustrating images to capture are also the most rewarding. At 7pm on New Year’s Eve, this is the night shot I was taking from a nearby rooftop looking out over Shanghai’s “Nanpu Bridge”. The bridge is one of two spans which link the two sides of the city – PuDong and PuXi. Not only is the HangPu river one of the busiest shipping channels in the world, these bridges are fundamental to daily life in the city – the Nanpu bridge alone carrying up to 140,000 cars a day. The unique part of the crossing, however, is not the bridge itself – it’s how they manage to get all those cars up to the base of the towers in such a heavily populated area. The solution? Build a 4km long circular junction which climbs up through three loops with on and off ramps in each direction.

This wasn’t the first time I’ve been to the top of the building I took this from – the first time was actually when I wrote a piece for “MoneySupermarket.com” on low-priced compact cameras.  During June, I took my old Canon 5D/III up there to shoot the network but there was something missing: lights! 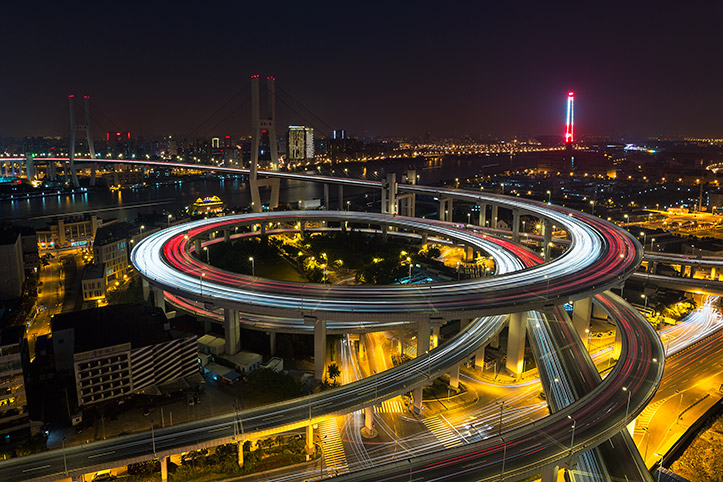 You see, as someone who passes over the bridge on an almost daily basis I was acutely aware that not only does Shanghai illuminate the freeways at the weekends, it also makes use of the thousands of multi-colour LED lamps that were installed on both bridges on the night before a National Holiday. The problem? I’m quite often away for these holidays and, of course, security on rooftops is increased during these times. Still, determined (and with my trusty friend Hank to help!) we made our way up at 6:30pm on New Year’s Eve 2013 to see if we could capture the rainbow show on the bridge. We were in luck 🙂 I say “in luck” with little irony, as moments before getting there I had smashed my iPhone into as many pieces as there are lights on the bridge. 🙁 Still, frustrating though that was, it would have been even more of a waste had I not captured the picture I wanted while up there! I got the Phase One iQ280 and 645DF+ out, along with the Phase 28mm lens (which is a 17mm equivalent).

In theory, this was the same setup I used to capture the Nanpu Bridge in June (the yellow hued photo, above) – in practice, the difference between 80MP and 23MP is huge.

The detail, the clarity and the richness of the image I got on Tuesday night just can’t be touched by the image I took with my Canon gear.

Of course, proof that any camera is capable of great images, Hank’s iPhone did a great job too – just a shame it struggles with noise and a narrow field of view..

To see this thing with your own eyes is amazing. Don’t get me wrong, driving over the bridge and “across the rainbow” is cool, but being outside on a rooftop watching the city get home after a long day’s work with the moving light show going on below you is fantastic. I’m not sure I’ll get back up there again (time to set my sights on my next challenge!) but as evidenced in these two photos, what a difference lighting can make to the exact same scene!

So, 1 broken iPhone, a risky rooftop traverse (don’t ask!) and being late for the New Year’s party on The Bund – all in all, an expensive and risky way to get one final picture during 2013. Was it worth it? Of course. 😉

…and so were the fireworks later on as we welcomed in 2014 with the rest of Shanghai! 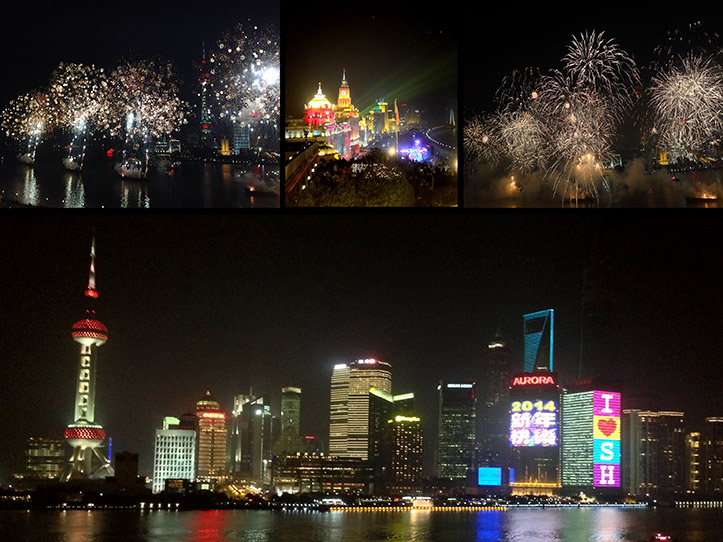 …luckily, I had access to a spare iPhone until I got mine replaced the next day! 🙂

Some Recently Published Images - Thanks to my friends!