It’s the one thing I promised myself I would never do after I upgraded my equipment from my Canon gear to a Phase One Medium Format system : re-shooting a cityscape I had already captured. 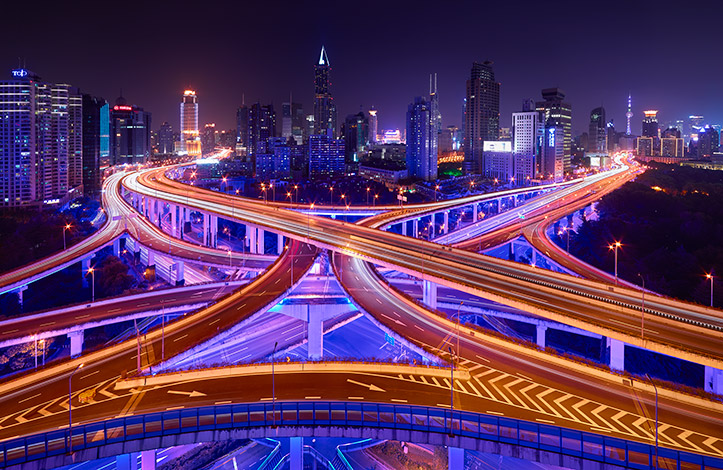 But the lure of Shanghai’s rooftops on a clear night was just too strong, and here I found myself shooting “Shanghai Calling 2” with my 645DF+ and iQ280 digital back.

Now, before I go any further, let my just clarify one point: I LOVE my Canon EOS cameras. They’ve served me well and the quality they produce is fantastic for the price point. When shooting concerts or action, I would always reach for my 1DX and 5D3 “combo” as my first selection, but one of the biggest reasons I invested in the iQ280 series in the first place was the resolution it could produce for landscape images and so far I have always been impressed. 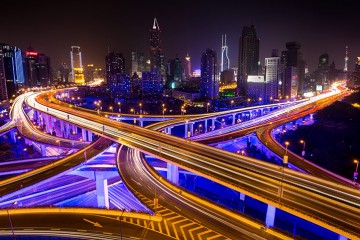 It began as a regular planned cityscape shoot – capturing traffic trails and lights around the elevated roads at night along with the “Nine-Dragon Intersection”. (There’s a myth/story about deaths caused when the roads were built so a huge metal statue was constructed where the freeways join). The problem is, that same intersection is looked down upon by one of my first, and favourite, rooftop adventure buildings in the city and all I could do was keep looking up.

So while this was never intended to be a “product comparison” shoot, I couldn’t resist the urge to see how my Phase One equipment would perform in comparison to my original Canon EOS 5D mk III shot from a while back – “Shanghai Calling” (image on the right).

Obviously, atmospheric conditions change, as do buildings and their lighting setups over a period of years. So there was naturally going to be a little bit of difference in the two shots – not least of course being the difference in effect based on the pollution level of each day. And on the face of it, both camera systems did amazingly well.

It’s a challenging environment. Not only do you have wind blasting from all angles, but it’s pitch black up there with many obstacles on the roof, no safety barriers once you get your equipment up “on the ledge” and a friendly (ish) security guard counting the seconds you’re up there putting his job at risk. This time, I also had the benefit of my new Giottos Silk Road 3D tripod that allowed me to push the arm out over the edge of the building to get an unobscured shot (don’t worry, I checked below first!).

Granted, the lens itself has a huge, huge, impact on the final image quality at any point – but it’s a bit difficult to use the same piece of glass between Medium Format and 35mm systems, so I’ve had to stick with comparing the Phase One AF 28 mm f/4.5 A (17mm 35mm equivalent) to my Canon EF 16-35mm f/2.8L II USM. Both are fine pieces of engineering in their own right, but from a cost perspective one is 4-5x more expensive than the other. Likewise, the sensors are in different leagues – the Phase One 80MP Full-Frame Medium Format 645 CCD vs. the 22.3MP CMOS 35mm is somewhat of a David and Goliath scenario at best (at worst, a completely unfair comparison). But hey, I wasn’t trying to see if my iQ280 was better, I wanted to see how much better it was…

So here we go – here is the overall map of the new image, below. I’ve selected 3 very tricky sections to compare, and specifically chosen areas in the distance which are affected more in terms of and light blur, overexposure and distortion. 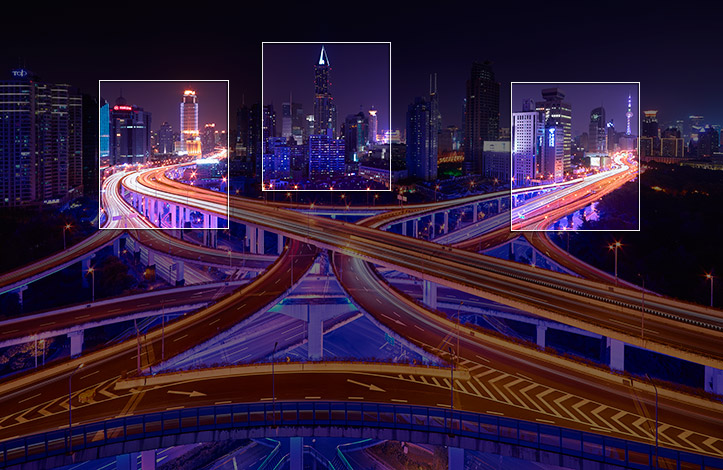 The samples (close-up) are below, but these are also only very small versions of the full crop. If you click on any of the following images, you’ll be able to download the full 100% comparison (around 4MB each file).

At this point I have to mention one thing: The Canon image was already “tweaked” in Photoshop, to add some sharpness and fix the colour balance of this tricky scene (bright blue, red, yellow and white lights against a dark background can cause issues for any camera).

The Phase One image, on the other hand, while processed using Capture One Pro 8 as a raw converter has NOT been touched in Photoshop at all. This is out of the camera, no sharpness tweaks, no playing with colour (even in Capture One) – and for that reason alone, I’m amazed. 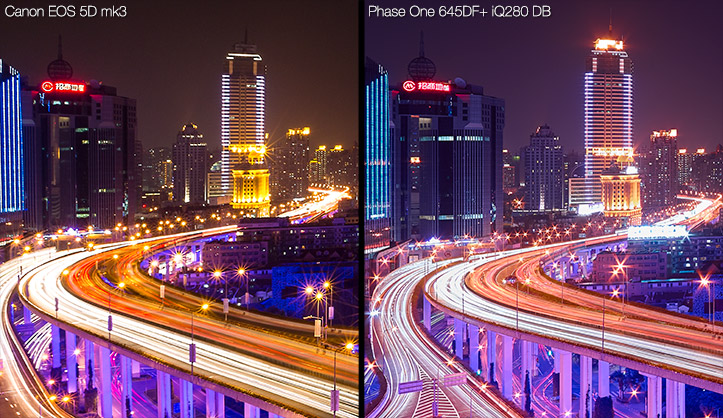 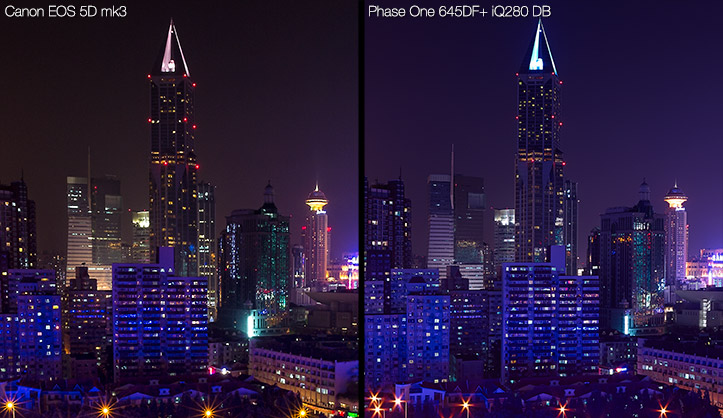 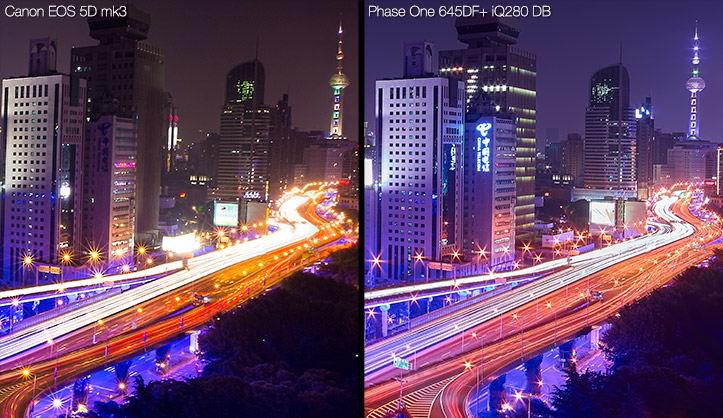 Please do have a look up-close with these images. The difference is staggering (and rightly so) – let’s be clear here, we’re comparing around $4,000 of equipment against around $50,000 with just the one lens setup. On the scale of unfair comparisons, this one is off the chart – but wow. The richness of colour, the details, the sharpness and depth of the image coming out of the iQ280 is in a different league to anything the 35mm sensor can deliver.

So what did I learn? That the camera system nearly 13x more expensive than the other one produces better images? Of course, but we all knew that already! I guess I’ve at least confirmed it to myself now! 🙂 . To say I’m happy with my new equipment would be an understatement, and this has cemented my opinion that the iQ280 digital back is a phenomenal piece of technology (as is the rest of the system itself). But no, as I left my computer comparing these two images, I actually got a really bad feeling inside – why had I even tried to judge them in the first place?

Technically, it’s interesting to see the comparison – but for a brief moment I’d forgotten the one thing that I hold with the utmost importance when I’m shooting: I take pictures to capture how it felt to stand at that point, at that moment, right now. My Canon gear had been with me for years before the switch, and I absolutely LOVE the images I took with it. Not only because the quality of shots is fantastic in its own right, but also because each image I have captured brings back memories and reminders of how it felt to be there.

Standing on top of the same building, shooting the same scene, just to see if it “could be captured better” felt a little empty. The excitement was gone – there was something missing at that moment; it had become a technical challenge, not an adventure. I am absolutely blown away by the quality of my new shot from that rooftop – up close, it looks amazing. But being there as a photographer, it simply didn’t feel the same as the first time I made it to the rooftop, looked over the side and said “woah!”.

My Phase One equipment really is the best camera system I can imagine owning right now in the world – and for this I am extremely grateful that I’m fortunate enough to have it with me. But does that in itself make any other camera “less good”? No, of course not.

I still maintain that the best camera in the world is the one you have with you right now. Whether that’s a Phase One Medium Format system, a Canon EOS DSLR or an iPhone camera – capturing the memory of what you see right now is what it’s all about. The highest quality image is just an added bonus when you also have the right gear!

So, it’s time to take my Phase back out to some new and unique locations instead…!