Every now and then, I’m surprised by the reaction to a photograph which I didn’t think was that great when I actually took it. This image, “Alone“, taken at Lake Wanaka on New Zealand’s South Island just outside of Queenstown, turned out to be one of those shots after I uploaded it onto a few social media platforms… 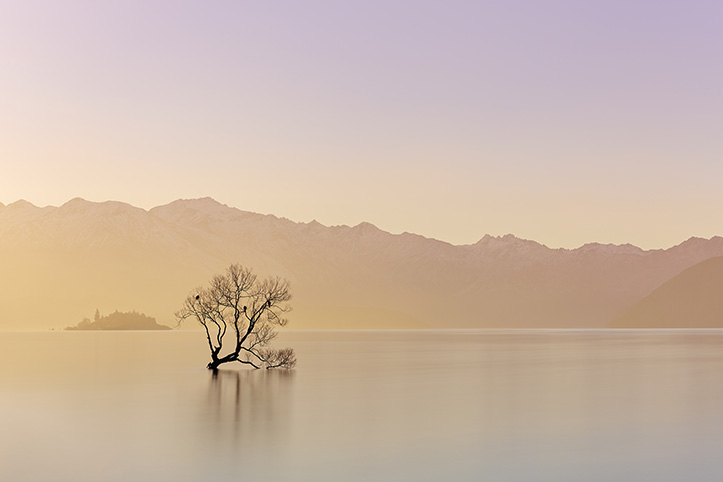 Some trips just aren’t destined to go the way I had them planned in my head. Flying to New Zealand from Shanghai is pretty simple, a direct flight with Air New Zealand means you get to Auckland in time to watch the sunrise from the lounge, just before getting your quick flight down to Queenstown; all good so far! All good, that was, until we flew over the Southern Alps: They were missing something I needed for this trip – lots of snow.

Yes, there’s snow, but not lots of snow – and while we were maybe a little early on in the season – given the fact the ski resorts were due to open that weekend, I was surprised to see what appeared as the same amount of snow cover as we had seen in the summer when we visited in Janaury! The guys in Queenstown sadly informed us that while they’d had a big snow-storm 5-6 days prior, the past few days had pretty much wiped it all out and the temperature was set to be high for the duration of our trip.

This was a disaster; my plan had been to shoot around 5 snow scenes on the Southern Island. Helicopters had been booked; Milford Sound in the snow; Lake TeAnau with morning mist with snow-capped mountains in the background; Mt. Inspiring with a low sun creeping around from behind – they were all planned in, but I guess this was going to be one of those “Plan B weeks”…! 🙁

So in true Plan B style, when we landed it was a case of “what DO we have to shoot instead?”. One place that I’d seen captured over and over again was nearby – Lake Wanaka, where a famous “lone tree” stands calmly on the edge.

Getting to Wanaka was rather ironically made easy by the lack of snow on the mountain pass. Arriving, it was clear that luck wasn’t on my side as usually the lake is at a level low enough for you to see the base of the tree and the mound of earth on which it sits. Further compounding my gloomy outlook was the fact that the lake was covered in a yellowish haze. (Not the yellowish haze that we get in Shanghai, thankfully!) but the moisture in the air was picking up on the yellow light of the sun as it began to set behind the mountains in the background. At first, I figured this was a lost cause – but moved around the shoreline to get different angles and clicked away regardless.

Getting a 60 second long exposure shot of a tree which is also a magnet for travelling birds is frustrating to say the least, but somehow I managed it on a couple of frames. Then, as the sun disappeared further the sky started to come alive, delivering deep pinks and blues across the few clouds that whistled past. On a normal day, this would have been a great shot in my mind, but given the disappointment I already had on day 1 of a week long trip, I have to admit I didn’t hold out much hope for the results. Still, I stayed to capture the scene from the beginning to the very last light… 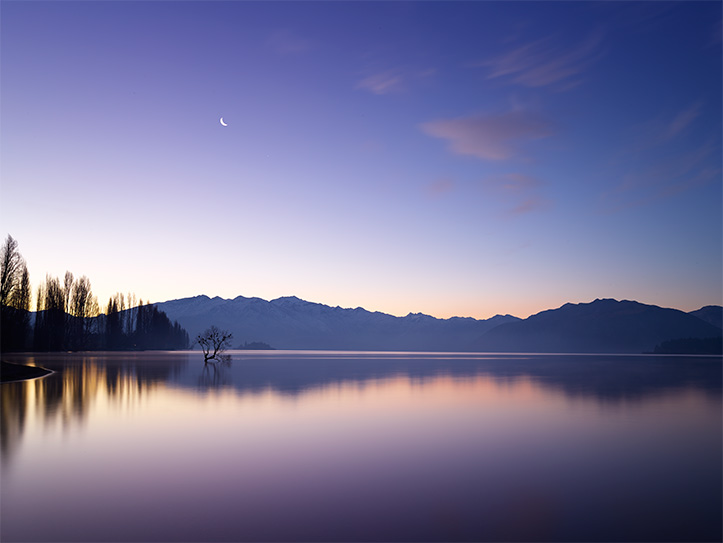 “Alone” may well be the only shot that I release as a limited edition from my trip to Wanaka. However, images like the one above where the moon appeared over that lone tree really were stunning to see with my own eyes as the light changed the entire scene minute by minute.

As is often the case, getting an image up on my screen after the shoot can show something different that I didn’t quite see before when looking purely at the back of the camera in the freezing cold. In the top image, the soft yellow tones caused by the early evening haze actually enhanced the photograph (in my view), creating a calm, serene, multi-layered scene, unlike anything I had planned to capture at this spot.

I guess you could call it my lucky break out of a seriously unlucky start to a photo trip…! 😉

Back at the W - Shooting the W Retreat Maldives