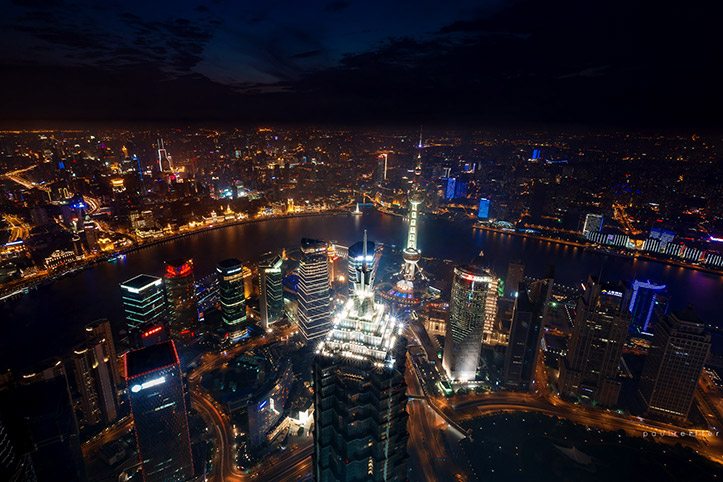 Now there’s something you don’t get to see every day – the top of what was once the tallest skyscraper in a country (the Jin Mao Tower), from above, at night 🙂

By day, it’s spiky architecture is a defining part of Shanghai’s Pudong skyline – indeed, it was the key focus for another shot I took from the same building (if a little lower down) – the SWFC. This image, however, was unplanned… 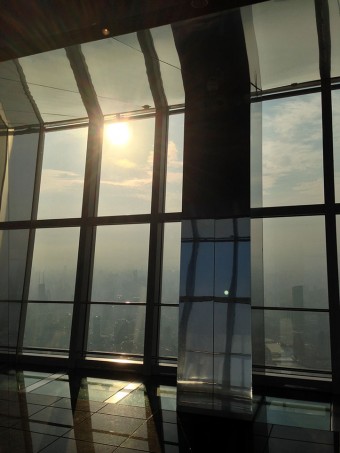 I’d intended to shoot sunset from the 100th floor observation deck. The last time I visited the Shanghai World Financial Center I ended up shooting from the lower observation deck as I was simply exploring the view. This time, I had a specific shot in mind (I wanted to catch the shadows of the skyscrapers on the Puxi side of downtown Shanghai as they spread across the river with the sun setting in the background).

Knowing that it would be difficult to “get a spot” for sunset, I headed to the tower about an hour before it was due – tripod and diet coke in hand…

The guys at the tower were surprisingly relaxed about me taking not only my equipment but also bottled liquid inside, despite all the signs around saying that it wasn’t allowed! That said, it turns out I wasn’t alone on this front as when I got to the top there were already 2 photographers camped out at their spots…!

Just like last time, the reflections and dirty glass were likely to kill the shot. I came prepared (scrap of black fabric again!) and started to watch the sun set across the river…

…and then watched the clouds rise. Damn!

I clicked, and grabbed what I could – the sun looked great, but in seconds the light had gone and the colours had faded – it really was a futile effort. The only shot that was even close to interesting is the one I’ve placed as raw out of the camera, below, and even that has the construction crane cable of the Shanghai Tower (to the left) cutting across the image. I didn’t bother to process any of these shots and figured I’d write the day off. 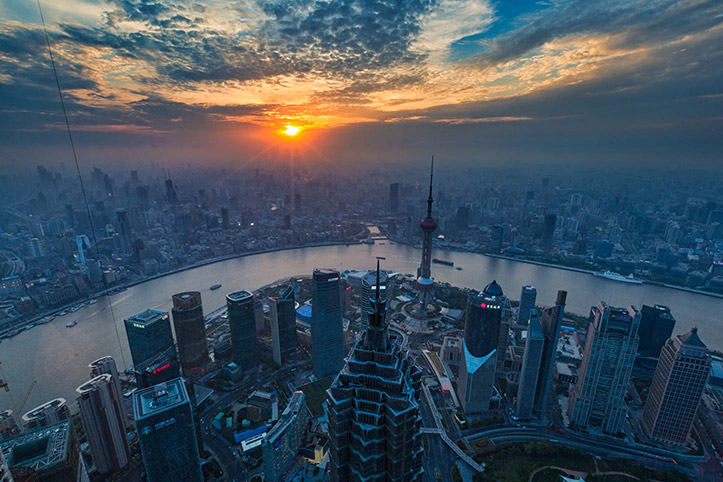 And then I thought for a second. I’ve paid to be up here; still have my “supplies”; my tripod is still set up – and it’ll get dark soon. The back-story here is that the first time I visited Shanghai (many years ago), the SWFC didn’t even have foundations and I stayed in the Jin Mao tower. I remember how bright its “crown” is at night, and figured it might be cool to shoot it from above at night.

A few issues, however:

Hmmmm. Only one way to see if I could get anything – sit there for another hour or so…

Even in these shots, you can see the reflections on the glass (which are minimised when I raise the “cloak” I have over the camera!). Still, the city started to light up and true to form, Jin Mao became the brightest star in the sky. (Well, the only star – there’s too much pollution to see any real ones from Shanghai!)

A 5 second exposure seemed to be the magic number, and with some clever tilting of the lens, the light which is shone directly at the observation deck from below (thank you, whoever designed that?!?) was eliminated. At f/14, the crown of the Jin Mao lights up with starbursts on every edge, the exact thing I wanted to capture.

So, I didn’t get the sunset I wanted. Am I disappointed? No… As quite often happens, I got something else that I’m equally happy with  – the top shot on this post 🙂

Shanghai Calling : Freeways That Define A City From Above