While eclipses of all sorts happen throughout each year – from “blood moons” to annular solar eclipses, total eclipses and every partial one in between, this year’s lunar eclipse promised something special: the longest lunar eclipse in the 21st century. 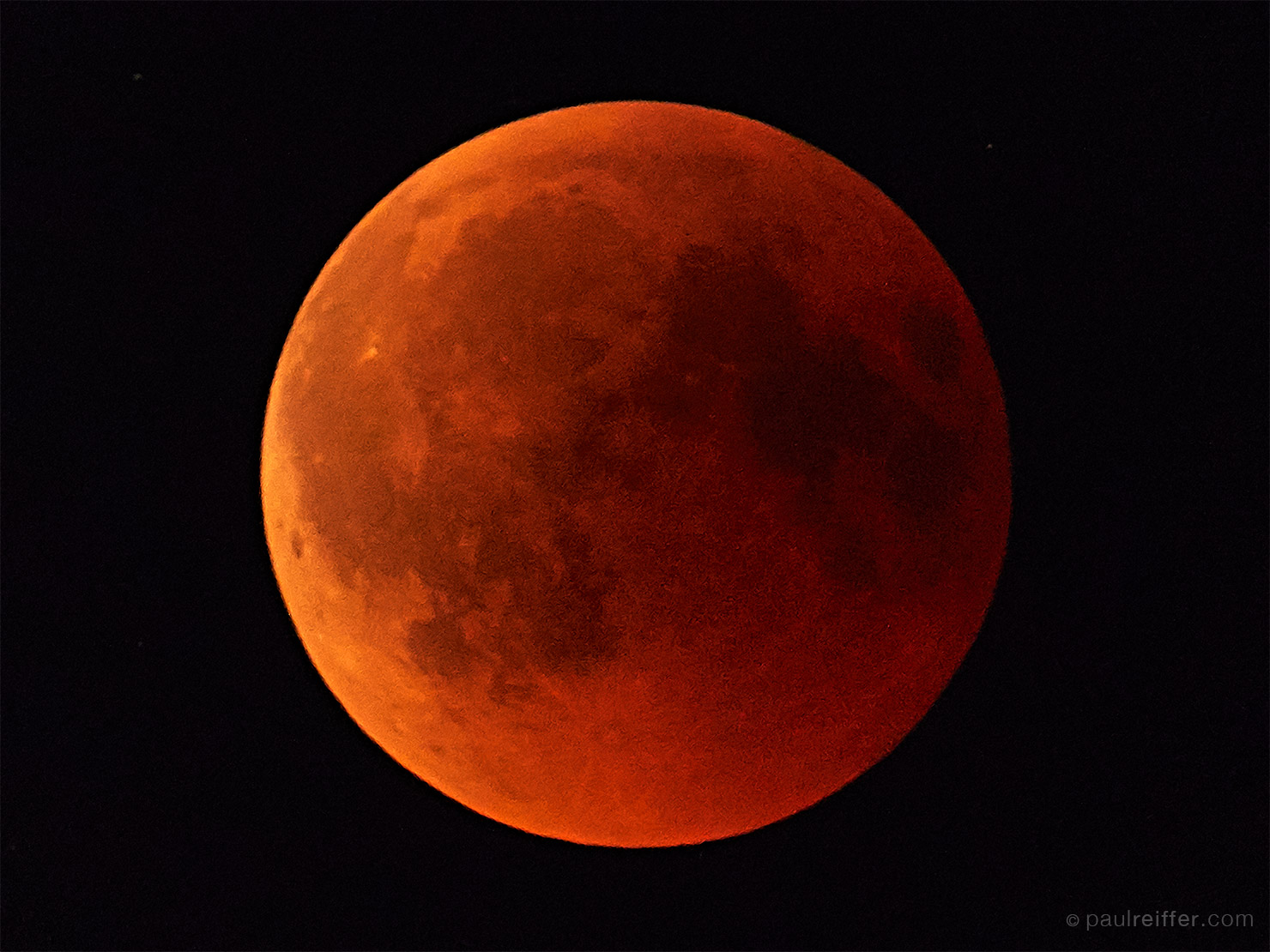 So the call from Rollei came – could I come across and be involved in their live shoot on Instagram, capturing the spectacle from Hamburg?

With a few days’ preparation beforehand and a couple of challenges finding an accessible location with the right line of sight (plus the potential for a cloudy night) Friday 27th July 2018 had finally arrived.

So, what were we looking for, in order to capture the moon in it’s “blood red” form?

Thanks to our good friends at the Holiday Inn Hamburg, finding a vantage point with a guaranteed view of the moonrise wasn’t a problem…

Indeed, it actually made for quite a relaxing evening, looking out over the city with sunset to the west and our location for the moonrise to the east. So much so, it was worth taking a quick 5 minutes out to capture the city too…

Even on the back of the camera, that shot brought a smile to my face – so clean, crisp, and iconic with the famous churches of the Hamburg skyline in shadow against the setting sun. 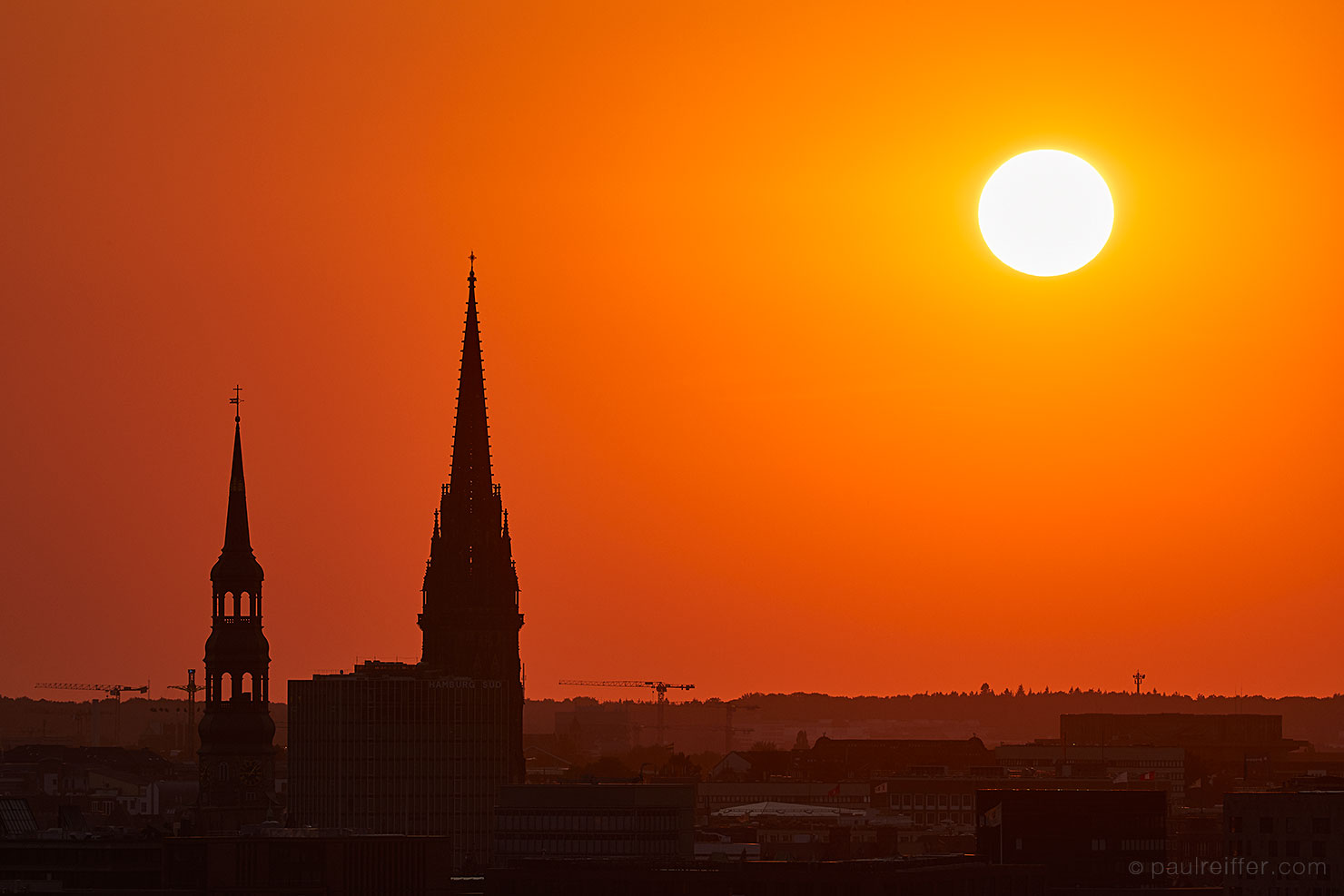 Well, that was one in the bag already – even if the evening turned to disaster, it was worth the walk around the rooftop to see that anyway!

So back to our lunar eclipse – and back to that check-list from earlier. With our location arranged and the all important clear view, what about those other factors we needed to capture the “blood moon” tonight:

Back to our view and my normal happy feeling when the sky goes pink, in this case, turned to frustration – the pink in the sky comes from moisture bouncing the sunlight back, and moisture (as above) is not our friend when shooting at night. 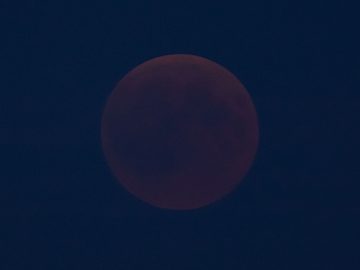 Checking with friends and contacts in other cities around Germany and neighbouring countries, it seemed anyone north of Greece was having the same issue – absolutely nothing to see here…

But then just as we were discussing packing up for the evening (facing away from the moon), and only 10 minutes before “totality” should be occurring, our hotel guy’s eyes lit up: “Isn’t that it, just starting to appear over there?” He said.

How on earth he managed to initially see it, out in the distance, I still have no idea – even with that 560mm zoom, it was a challenge to hunt it down properly. With so little contrast, there was no auto-focus option to begin with here, just “infinity and beyond!”

Soon enough, the moon rose just enough to free itself from the haze across the horizon. With the changing contrast and effect of the eclipse itself, this was a game of chasing sharpness, without sacrificing light. 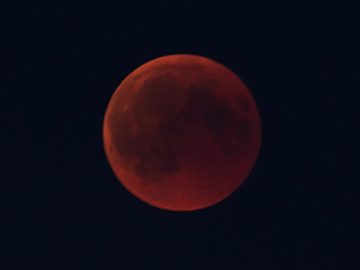 Clicking away, there was also the issue of how fast the moon was moving – especially given the long focal lengths.

As the sky was getting darker, leading to more contrast with the moon itself, the temptation to slow down shutter speed started to kick in. Even a 1.3 second exposure was way too long, resulting in a blurry image as the moon passed through the tight frame quicker than I’d hoped for.

Settling at 0.8 seconds, we’d hit that moment of total lunar eclipse, and finally things had started to come good. Granted, I’d have liked the moon a lot closer to the Earth than it was on this occasion, but looking at the back of the camera, I knew a few of these would be just fine.

Mars even made an appearance (on the right, taken from the back of the camera). Yes, if you thought the moon was tricky to capture, without a 4,000mm lens/telescope, that just wasn’t going to happen.

As the light from the sun began appearing again on the left hand side of the moon, it was easy to see how quickly the lighting changed through the viewfinder. Our “blood moon” was rapidly becoming “just a moon”, and frames even 5 seconds apart showed signs of difference from one moment to the next as the red began to fade to yellow.

What began to feel like failure, soon turned to success – thanks, in part, to the cloud staying put, but in no small way due to our newly recruited moon-spotter at the hotel. 10/10 for that help!

Overall, however, I can’t help but feel the evening fell short of its own hype.

Yes, I’m sure astronomically the “longest eclipse in 100 years” was the exciting part – but in terms of photography, there are much better scenarios that I could think of:

But all that aside, when you look up and see that glowing red disc instead of the “standard moon”, you can’t help but be impressed by how great our solar system truly is.

Want to try and capture the next lunar eclipse yourself? It’s due on January 20th-21st 2019, and will be visible from the UK as well as the entire North and South American continents – check out timeanddate.com for more info!