Light pollution: Increasingly a challenge for city dwellers and photographers alike. Those deep, dark skies that I’m lucky enough to see full of stars out in the countryside are becoming an endangered species in their own right as the world’s population continues to rise and urban areas inevitably expand.

The problem is, with all that light bouncing around, our view of the night sky (and ability to capture it) continues to diminish on a daily basis.

As photographers, of course, the tried-and-tested approach to this has always been to head away from the city lights. “Dark Sky Reserves” have been set up all around the world to allow stargazers to enjoy the night-time environment our species seems to determined to destroy. In practical terms, however, this doesn’t always work for everyone – and what about those little towns and villages which look so photogenic underneath the Milky Way? How do we capture them without their own light pollution spoiling the view?

Cut down light pollution and allow you to focus on the night sky.

So how do they do it?

Usually when we’re evaluating filters, we’re looking for absolute neutrality in colour – we need to capture exactly what is in front of the camera’s lens, with no colour-cast or distortion of reality. In this case, however, that’s not quite how things need to work… 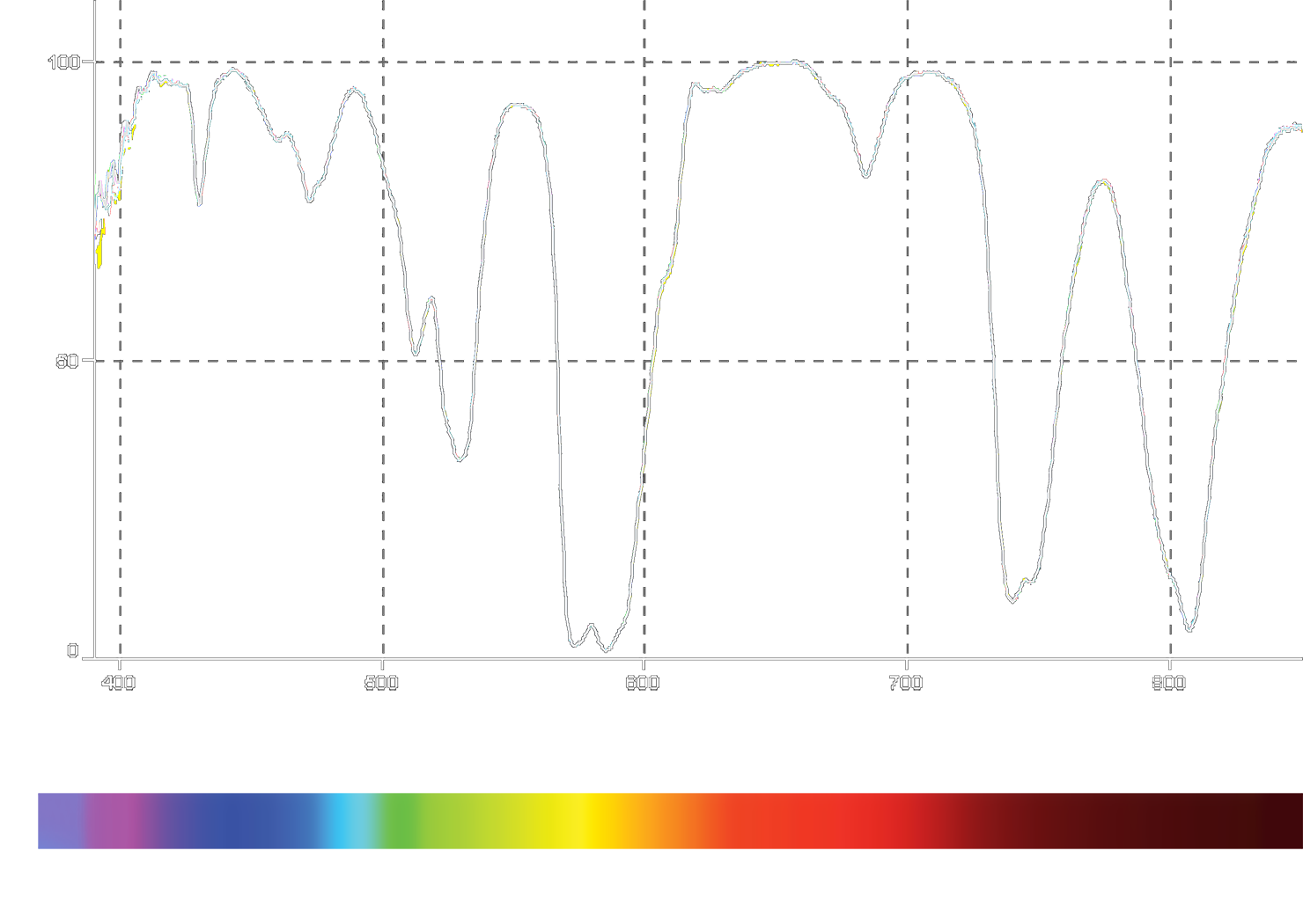 The challenge with light pollution is that it comes from different wavelengths of light. Typically, most of it comes from the yellow-orange sodium lamps what most of our cities still deploy (although that’s slowly changing to a cooler LED source over time). Likewise, some of that light bouncing around the atmosphere can provide a cyan-green glow in the sky above.

Add in to the mix, all the infra-red light that is a byproduct of lighting our cities at night, and that’s a lot of specific colours we need to “cut” in the filter. And that’s exactly what these do – as shown in the actual filter output graph above.

For reference, a “perfect” neutral density (ND) filter would have an almost flat line between 400nm and 700nm, and then cut everything else. That’s what makes it “neutral” and is what all filter manufacturers are striving for to create near-perfect glass with almost no “colour cast”. 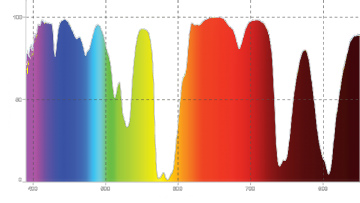 So, what about these “light pollution filters”?

Well, that profile is exactly what they’re designed to do. The graph above, and to the right, is from an actual example of one of these filters, and you can clearly see how much of those unwanted colours of light they’re designed to “cut” as those wavelengths enter your lens.

From allowing almost all blue and red light through (90-100%), but blocking almost half of the green hues and virtually stopping all but 5-10% of the yellow-orange polluting light from our cities, these filters help cut down the impact of our need for illumination on the night sky above.

Do they work? Well, yes and no…

Let’s look at a good example of two raw images from Patagonia (one without the filter and one with). Other than profile corrections for the lens, not much has been done to either of these images to give a real sense of the difference this filter can provide: 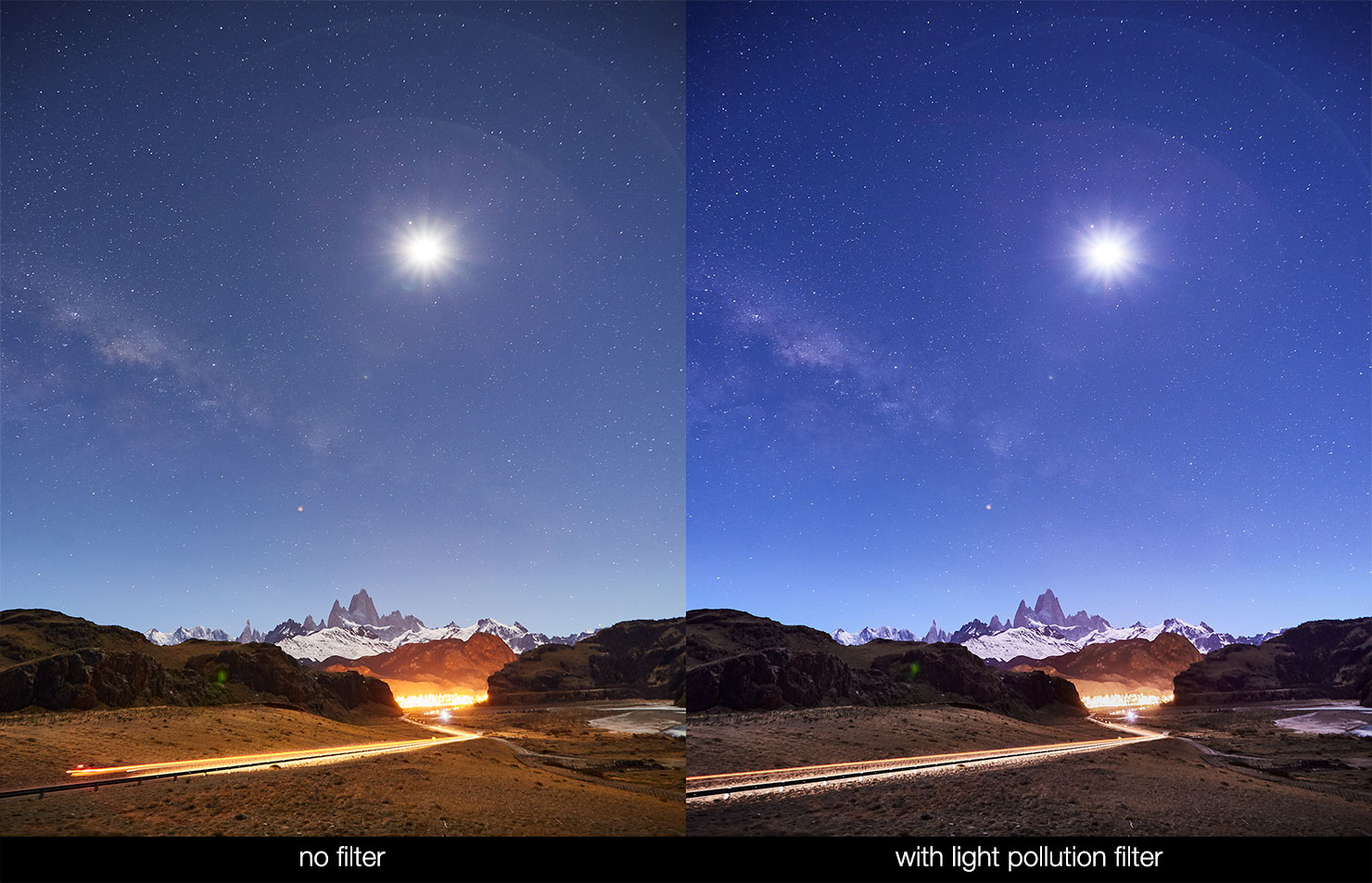 Pretty good, right? I mean, the sky seems to have become clearer, the distracting yellow “glow” has certainly improved, and overall we’re looking at a shot that “pops” more than it would have done, raw, without any filter.

Let’s try another – this time from Lake Wanaka in New Zealand. Again, one straight through the lens, and another with the effect of a light pollution filter: 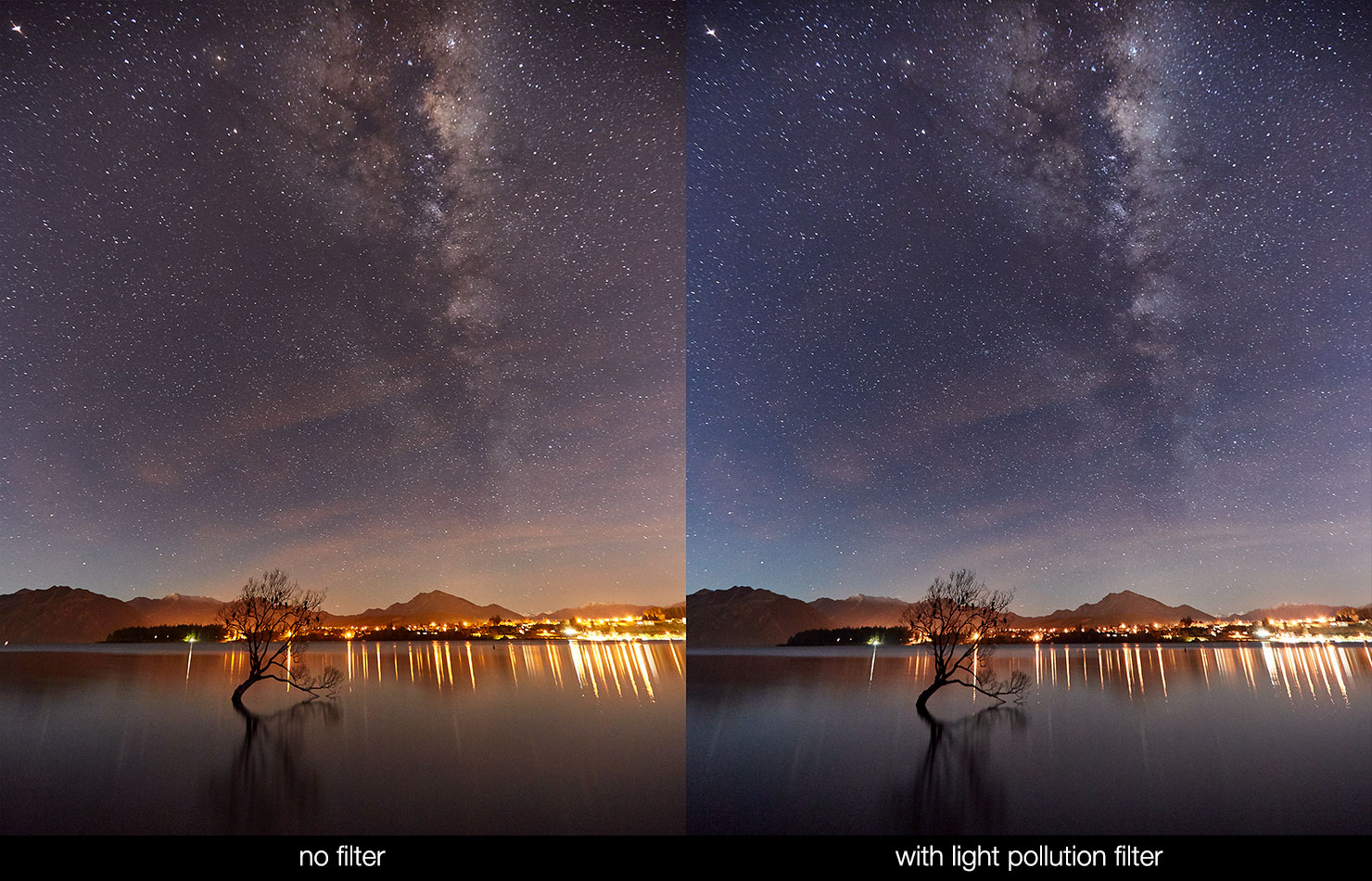 The scene has “cooled down” quite a bit – the stars, again seem clearer and pack more “punch” than without, and the city lights are certainly less distracting. (In fact, the only distraction that remains is the annoying lean on the ultra-wide lens that I would otherwise have corrected!)

So let’s push things just a little bit more – how about some Aurora Borealis (Northern Lights) action on-camera? How would the light pollution filter fare in this more challenging scene, where we want to allow as much light to be captured as possible?

In all honesty, better than I thought it would – after all, it’s still captured the Northern Lights, and while there was very little pollution in the north of Norway to contend with, it did even manage to cool down the moonlight too.

But that, unfortunately, is where my challenges with these filters begin.

The downsides to their use

While in theory a great addition to your kit bag, let’s think about exactly what these filters are doing…

However, with all that said, these pieces of glass do deliver on their promise – and they do a good job of it as well.

While I’m sat thinking I’d rather collect as much raw data as possible in the frame, and “fix” any stray light pollution later, that’s on the back of decades of experience in editing software. What these filters do is make that process a lot simpler, with only minor adjustments being required to achieve a final result that is pretty impressive.

While, of course, we can “dial-back” the specific colours in the image in the same way the filter cuts them, we also then have to introduce some HDR features and clarity enhancements to get close to what the light pollution filters can achieve in-camera.

With that in mind, for general use, while they don’t capture all of the light and do have an impact on the overall colour of the scene being photographed, these filters really can make light work (excuse the pun!) of getting great results at night.

Not just for stars

What if we want to capture the city itself – not just the night sky? Well, they can help boost those shots too.

Not bad for a single piece of glass in front of the lens, right?

Our dirty yellow atmosphere above Downtown Dubai has all but disappeared, the city seems clearer and more “alive”, and the sky has definitely cooled. This filter isn’t just for use on stars and planets – clearly it has a positive effect on the cities it’s trying to combat too.

Overall – a great product, for a very specific use, and a good tool to get the best out of our skies at night if you’re not confident in processing the raw output of all the captured light from your camera.