Despite the initial frustration, there’s something rather satisfying about finally getting the shot you’ve been working at for a while – managing to “beat the weather”, in a sense… 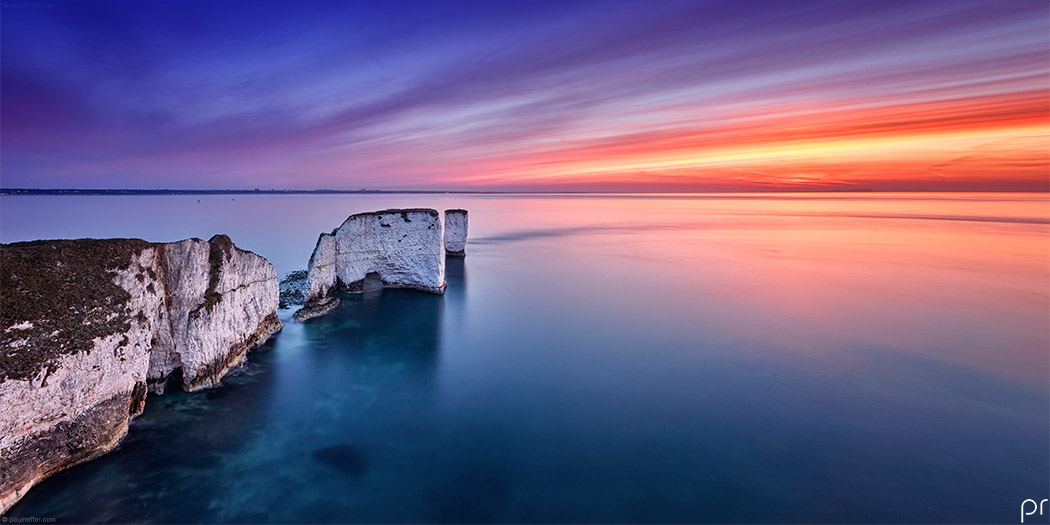 Old Harry Rocks, jetting out into the English Channel – these chalk cliffs are all that remains of the stretch of headland that once joined the Isle of Wight to the mainland at Purbeck. Similar in appearance to “The Needles” across the water, these monolithic towers are an awesome sight when you first look over the clifftop, and get no less impressive the more you see them.

It was during our latest Jurassic Coast workshop in Dorset that Old Harry Rocks became of interest again. Sat eating dinner with our photographers, the weather forecast called for more sea-mist and low level cloud to arrive overnight, potentially ruining the plans we’d made to head east to Lyme Regis the next morning. While other options were feasible, the Studland Bay headlands looked most promising, and could ensure everyone got a seascape shot they’d be happy with.

Luckily, despite the earlier than planned start, the weather played out in our favour and it was the right call – the shots, while at low tide, provided pastel shades of pink and blue as the sun slowly pushed through the cloud after sunrise. I saw some great images on the backs of peoples cameras, and it had been worth the change of plan.

However, on workshops, I make a point of not shooting my own photographs.

Of course, if we need to demonstrate something, I’ll take an image for the purposes of helping the group, but my main objective (of course) is to ensure every other photographer gets the shot they’re happy with, not me! So, a week later, having a renewed perspective on this amazing landmark (It’s a UNESCO World Heritage site too), I decided to return and see what I could get.

Making the call on the weather is a hard one from 30 miles away – things change a lot over that distance when we’re talking about the coast, and there’s a huge element of chance in getting the right conditions. The trip isn’t that quick either. Having left home at 4:30am the first time (before the clocks went forward), to then drive for an hour across the winding country roads, then walking for 25 minutes across farmland in the night air to get to the clifftop, it’s then rather frustrating to find two things:

For almost the entire walk up to the clifftop, the wind had been calm, only to be met with a surprise of 25-30mph freezing cold gusts racing up the side of the rock when we arrived. Not one to be deterred (stubbornness kicks in after that amount of effort so early in the morning), I clicked away regardless. I knew, however, that no matter what I managed to capture, it just wouldn’t be sharp given how much I could see the camera (with weighed down tripod for stability) was moving in the wind.

And I was right. Regardless of the fact the sky eventually turned out to be interesting (around 20 minutes after sunrise), none of the shots I had were usable when I looked up-close. The wind movement had too much of an effect to allow the images to remain sharp, even on my ultra-wide lens. So, that was a bust, and all I had to show for it were freezing cold hands and a headache from the wind-chill. Still, at least I had my timings right for next time!

Fantastic – the clocks had since moved forward by an hour! But then, sunrise had also moved by over 40 minutes since my previous attempt. The net effect? Not a lot of change to the alarm clock – 4:30am it was, again. The entire time in the car, I could see the sky clearing above as I drove nearer to Purbeck, looking more and more promising with every mile.

And on arrival, this time, I was ready – with hand warmers and my trusty bottle of diet coke I stormed off across the farm track to the same location, this time to find myself alone when I arrived. Great – there was my spot!

Colour started appearing across the sky, but then, so did one rogue (and rather massive) cloud formation to the south. Fearing for the worst, as it crept further north, I captured what I could as the sun slowly tried to fill the sky with light despite being hidden by the growing cloud. It wasn’t worth it – the scene was just flat, and wasn’t what I had in mind at all. The wind, while less gusty than during my previous attempt, was still bitterly cold and was hitting the camera from the east as we stood on the exposed clifftop – shooting in this direction just wasn’t going to give the results I wanted.

Ready to pack up and call it a day, I happened to glance back behind me as I removed the filters from the front of my lens.

While the more famous set of rocks to the east of the headland were losing out to the cloud, the set back to the west seemed to be enjoying the show overhead…

Already cold and disappointed, I decided the extra 20 minutes was well worth it to hang back and see what happened. Good call – it was most definitely worth it, with the sky suddenly bursting into light as the sun popped through the tiny holes out on the horizon behind me. 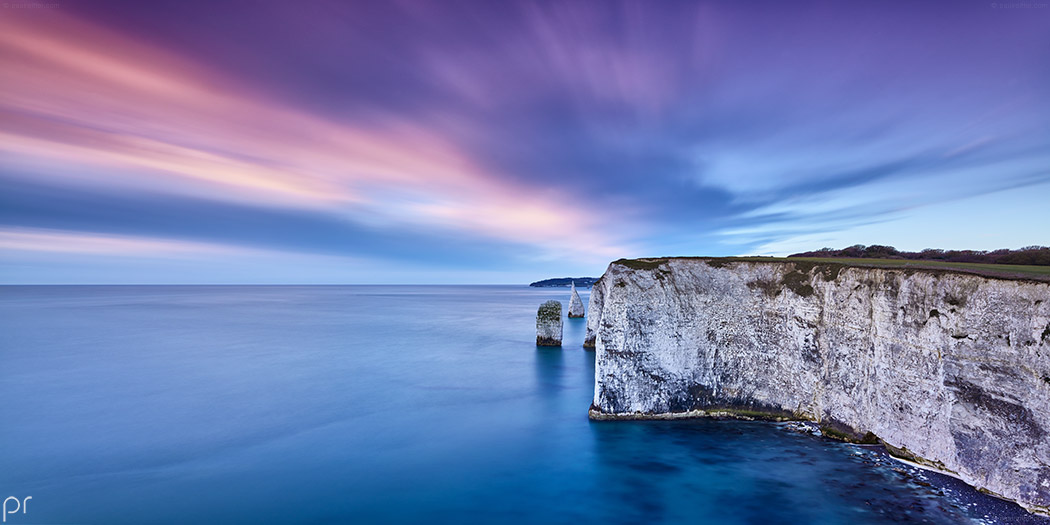 So, finally, not a wasted trip. But, it still wasn’t “the shot” I’d been hoping for. Looking at the forecast for the next day, however, something told me it might just be worth one last try. But did I have it in me for another early morning drive and walk to the top of the cliffs…?

You notice a few things on the third attempt to get the same early morning shot: Your alarm clock sound is just that little bit more annoying. The drive becomes less interesting than before. Your “positive attitude” quickly fades the moment you see the tiniest bit of cloud in the sky. You start mentally preparing for the worst.

Arriving at the same car park, in the same spot, it was time to put on the same gloves, grab another drink, and trek back up to the cliffs. This morning, however, there was something most definitely strange about the sky. Almost an an hour before sunrise, it had slowly started to turn a misty pink through a series of whispy lines of cloud – not like anything I’d seen before in this particular location. With no idea of whether this was a good or a bad thing, I hurried up just in case…

It was most definitely a good thing.

The sea was calm, the wind was mild, the temperature (while not tropical) was a vast improvement on the previous two attempts. “This could be the shot” I said to myself out-loud (luckily with nobody around to consider me crazy). 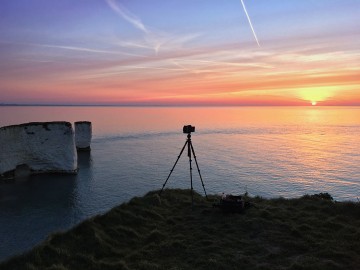 Over a period of around half an hour, the sky changed dramatically – from deep reds, through pink, to orange, to pastel shades of peach and then eventually yellow.

Even as the sun rose, due to the thin layer of cloud out to the east, the warm glow still remained for 15 minutes longer than it usually does, before it eventually broke through. Despite capturing all stages – and being very pleased with myself when I looked at the back of the camera for the shot taken just as the sun popped over the horizon – it was one of the earlier scenes that really caught my attention.

Once the sun is up, it naturally becomes the focus of the shot – and that wasn’t why I was stood here. I wanted to make the rocks the hero – and the vivid sky 20 minutes before the sun appeared was the look that caught my eye. That was the shot I’d be keeping.

That final walk back to the car, and following drive home, I had a smile. Not a smile because of the photograph I knew I’d captured – but because I’d just finished a lesson in my own advice.

One of the things I teach on my workshops is that quite often, people confuse “luck” with “tenacity” or “perseverance”. We often say photographers were “lucky with the weather” or “were in the right place a the right time”.

Were they really? Or did they just not give up on the location and shot they wanted to take…?

Cold as Ice : An Amazing Winter in Iceland