There’s always that one shot, for every photographer out there – “the one” that just keeps getting away, the one that’s never quite right when you click the button, or the one that’s impossible to find the right conditions to capture. For me, that shot has been the same for over 9 years now: San Francisco’s Golden Gate Bridge in the fog.

Finally, one random winter’s afternoon, I managed to break that spell – and shoot “Fog City”, my latest limited edition print: 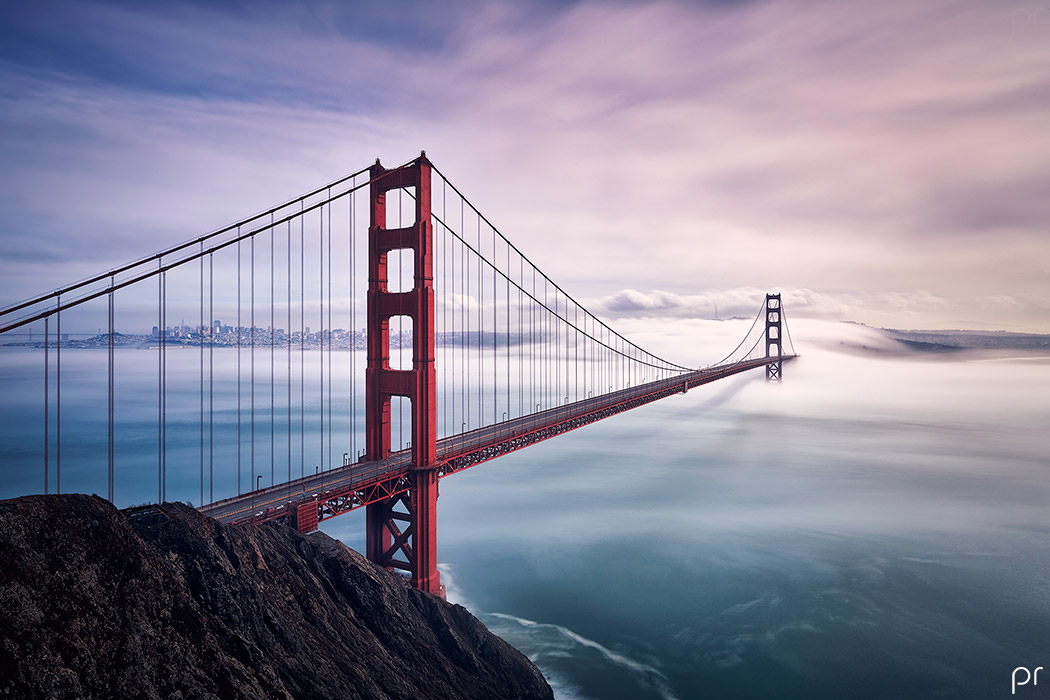 What could possibly be so difficult to capture in this shot? I mean, it’s San Francisco, the city that’s known for its fog, right?

Well, yes and no. You see, while San Francisco itself can be reliably foggy, I had pictured a specific look where the bridge was still visible but with a sweeping fog bank moving through the Golden Gate.

Since 2006, at every opportunity I’ve had in the city, I’ve driven up to the spots along the Marin Headlands, just north of San Francisco itself. Sunrise shots meant leaving at 4:30am to drive across the toll bridge in the dark and be met with either not enough, or way too much, fog on the other side of the hill. Sunset forecasts for fog and mist meant constantly missing dinner plans. Daytimes just became a lost-cause with the fog bank turning into thick cloud instead, and the toll charges alone must have cost more than $200 in attempts over the years.

So, what made this time special? The simple answer is “nothing”. Nothing at all.

In a city that has such changeable weather patterns, this shot simply comes down to one thing: Luck. Being in the right place at the right time, nothing more, nothing less. Yes, the equipment and filters I’m using help – but in reality, this was the first time in all those years that I’d even seen the fog sitting “just right”, and even that was a bit worrying when I first got up to the lookout.

Arriving in Marin, despite there being a lot of the white stuff hanging around the gateway to the ocean, there was simply too much to get any detail and the bridge itself was constantly being obscured. To give up and carry on the day, or stick around and keep trying? A question that’s easily answered when it’s your 30th or so attempt at the shot and the closest you’ve seen the weather to being “well behaved” – we held on… 😉

And then, like a clearing in a movie, the scene began to slowly clear. The temperature difference brought with it a breeze that kept the fog moving over the hills in the background, but it was still light enough to not disturb the camera. The glare from the sea when the sun reflected back needed a CPL filter, but with a heavy ND and ND-Grad filter added to the mix, I could keep a long exposure of the scene while balancing the extremely bright fog against the shadows of the Golden Gate Bridge itself.

Finally, I had it on my memory card, and wow that felt good! 🙂

What a fantastic end to the day, right?

Sadly, by way of an epilogue, my happiness was rather short lived. It turns out that (despite the many occasions I’ve visited the same spot over the years) I hadn’t realised it was a “known area” for thieves to operate. On our return to the car, parked in the public parking lot near the entrance to Battery Spencer, we found our car with its windows smashed and broken into (in broad daylight!) and despite the blacked-out glass and use of the glove compartment, thieves had climbed in to steal several things including some sentimental items that we were travelling with.

The police, on this occasion, demonstrated an attitude which was at best dismissive (and in my view, at worst, incompetent) with an “it’s insured, so you’re OK” stance from the moment they arrived.

It seems this area is well-known by them as a high risk spot for break-ins. There are no signs, no warnings (and despite several break-ins every week – yes, every week!) there is no CCTV installed. As a hot tourist spot (with people obviously carrying their belongings with them in the car) I’ve never been so disappointed by San Francisco and the attitude of the police who operate in the area. I guess they have more important things to do, but wow. Just wow. 🙁

As a note to all of you heading to these places – be very aware of who’s around and watching when you park your car – a busy tourist spot quickly turned into a scene where “nobody saw anything” on our return, so really, really, do be careful.

On a positive, with 9 years in the making, and despite the huge impact that break-in had on us, I guess I finally “got the shot”…