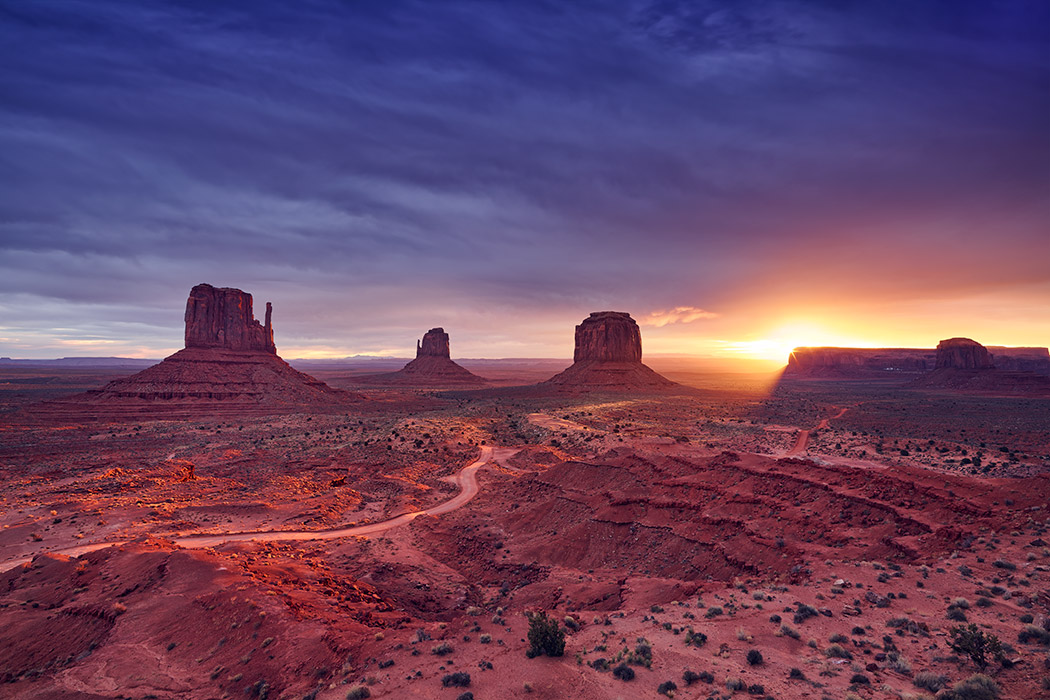 What a view to wake up to (well, kind of “wake up to”, if you ignore the hour we’d already been standing there in the cold waiting for the light to pop through the clouds…!)

This was the view I’d been hoping for – the ruggedness of the mountains and red rocks below, echoed by a powerful cloud formation that lifted just enough to allow the sun to pop through for a second or two 🙂

Arriving into Monument Valley, having spent the past week or so exploring other canyons and parks, I recalled my last visit here – it hadn’t been as successful. Weather had plagued us and I just couldn’t get anything “different” to the million other standard postcard shots that exist already. The valley itself is amazing to see, nobody can deny that – but the rocks themselves have been photographed so many times that they’re just not enough on their own in a picture.

This would be the first time I’d actually stayed inside the Navajo Park itself – at the only hotel that exists here, “The View”. I say “hotel” in its loosest possible definition as sadly, despite the high prices and fantastic view (which I’m sure are linked!), in every other expectation we had as even the most basic of hotels – this place fails. Still, you’re not paying for the service (or the food), you’re paying for the view.

So a few things to note about Monument Valley. First, it’s not a National Park – your parks pass won’t work here, and you’re not on US Federal ground – you’re on Navajo Tribal land; everyone you meet working here is a local/native Navajo tribespeople. In a similar way to USNPS, you do need to pay for a permit to enter the park (it’s valid for a few days, per vehicle), but once in you can go and explore to your heart’s content. (Just make sure your rental car insurance covers off-roading!)

Second, if you plan to shoot images with commercial intent (as I do), you must have a photography or film permit. The guys at the park are really helpful, and despite it being quite some paper-trail to get through, it’s not too difficult to get one. Just as I’ve mentioned before, however, please, please, please, don’t risk shooting without one. If you get “that shot” and want to sell it in the future – the park may just make a call when they see that image for sale, and then you’re in to a rather large negotiation…!

Finally, the park is a no-alcohol zone (even in the hotel, you won’t find it for sale). Yes, that means my excitement at finding a fridge full of “beer” was short-lived when I looked closer at the labels – and yes, that means phrases like “ice cold non-alcohol beer, after an adventurous day” really don’t cut it when you want to sit and relax in the evening – but hey, it’s not the end of the world! 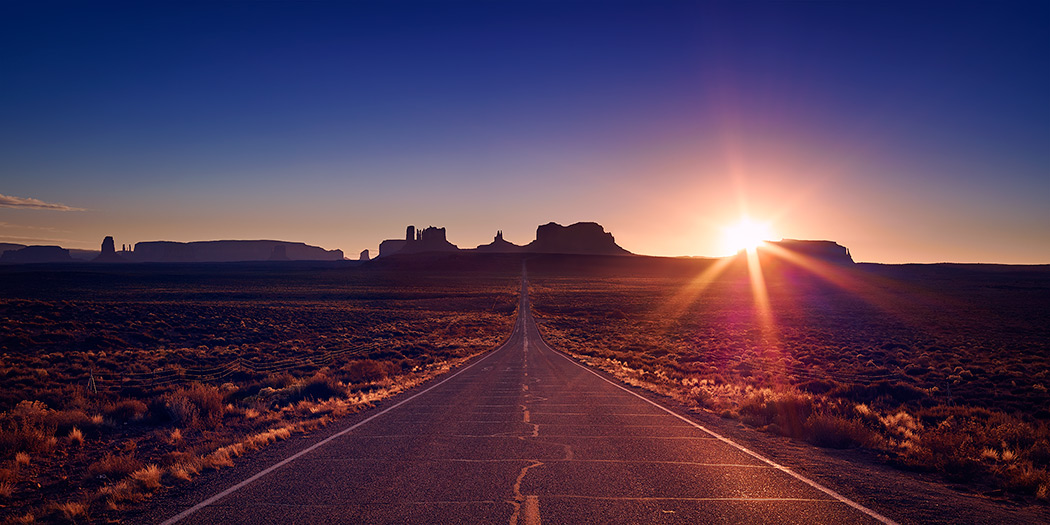 So, having been lucky with the sky so far this trip, I decided to chance a “stock shot” – the Mile 13 Marker on the highway (well, actually slightly south of that as I don’t like the hills either side at the usual spot people shoot from). Despite hoping for some clouds over the silhouetted mountains, the lack of them gave me a fantastic sun-flare as it popped just behind the rocks – but there was another issue…

The sky behind me had started to turn pink, plus the moon was out and rising.

Quick question: “Is it possible to shoot sunset at the Mile 13 Marker and also shoot the very last moments of sunset from the main park viewpoint over 15 miles away?”

With no time to even park the car properly, it was a case of leaping out and grabbing what I could. The first few shots, I decided to go for it with just a bare lens, while getting my filter kit out – and although they were cool, the contrast between the moon and the pastel shades in the sky was just slightly too much for even the dynamic range of my Phase One. 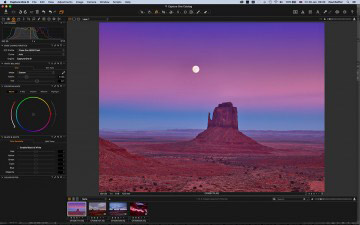 So, filters on (a GND) and it was a completely different story. and here’s where I want to share something which will help demonstrate just how amazing these medium format digital backs really are.

Here’s my raw shot (with some colour correction for white balance and the lens profile loaded) on my screen.

That’s detail in the moon, as well as the shadows, in a single shot. While the numbers of “13-14 stops of dynamic range” are spouted by the techies all the time, this is the difference of what these backs can do. The ND Grad helps a lot, but between the content that the Phase One camera captures and the way that Capture One can process it, I can bring back all the detail in the moon while retaining the subtle shadows in the mountains themselves, showing exactly what I could see at the time.

Of course, as the moon rises further into the sky, the difference between the brightness of the moon and the darkness of the earth becomes too great even for these digital backs to capture, but at this “sweet spot” just 10 minutes after the sun popped below the horizon, I’m genuinely impressed. The final image? Here it is… 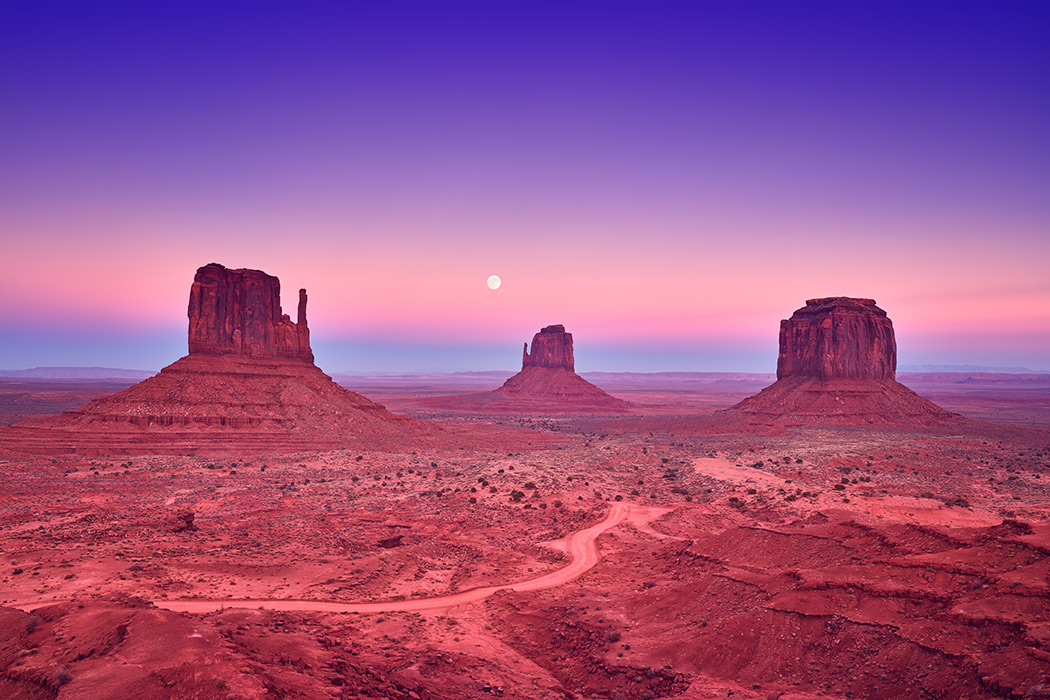 The full 80 megapixel shot has so much detail in the moon, as well as the “mittens”, I just couldn’t have hoped for more – and no, I’ve not had the urge to make the moon 20x bigger than it really was or fake a full milky-way display over the mountains, no matter how amazing I’m sure it would look… 😉

So that was sunset “in the bag” – both locations turned out well, and I learnt a bit about the performance of our rental car in the process. Back to the hotel for some awful food and alcohol-free beer before bed – my original plan to shoot some night sky images was scuppered by heavy cloud rolling in after dark, but hopefully it would make for an interesting sky in the morning.

Now the one (only?) advantage of having no alcohol on site is that there’s also no risk of missing sunrise due to a hangover!

With just a few metres to walk from our room to the location of the classic Monument Valley vista, in darkness, we arrived ready to shoot. That cloud was still in thick clumps, but I had a feeling the sun might just pop through at some point. Setting up, a few others arrived – all in time to see the sky turn rather flat and grey.

Otherwise ready to pack up and go myself, to be fair, one of the few reasons we stayed out shooting was because Vic’s GoPro was set to time-lapse the valley and it hadn’t captured enough frames yet for anything meaningful. On that basis, we stuck with it – for an hour.

Turns out it was worth it! That shot above and the very top image in this post wouldn’t have been possible with a less cloudy sky, and the sun just creeping around the rock formation in the distance (while frustrating), did allow me to at least capture that top shot’s sun flare for a brief few moments before it hid behind a mix of red mountains and high-level cloud.

Compared to my last trip to Monument Valley, this was in a different league from a photographic perspective. Well worth the drive, the early morning, and almost worth the stay at that appalling hotel!

And what about that time-lapse? Well, for those who want to watch the sunrise as it happened, here’s Vic’s footage:

And yes, it was around the 5 second mark in that movie I was about to give up – but just watch what happened at 7 seconds…!

Opening The World's Most Exclusive Gallery - In 30 days flat!