“The City that Never Sleeps”, “Gotham City”, “The Big Apple”, “Empire City”, “The City of Dreams”, “New Amsterdam”, “The Melting Pot” – to everyone that visits or lives in this incredible city, the place leaves a lasting memory that means something different. One thing that is common to all who visit or wake up in this amazing place is the sheer sense of wonder as you look out over the skyline – and that’s what makes it a cityscape photographer’s paradise 😉 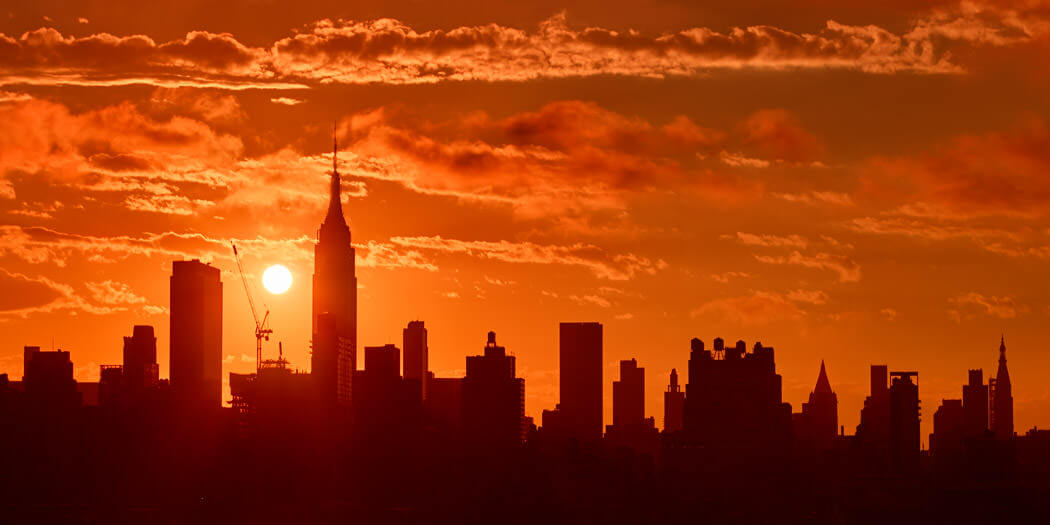 I first “properly” photographed Manhattan in 2010 – and my image of “The Empire State” managed to catch the eye of companies such as Yahoo! and SanDisk for their campaigns in the following years, but the temptation to head back for a dedicated photography trip was always lingering following that visit, so in 2014 it was time to take a trip back to New York City for a big shoot from sunrise to sunset and all through the night…

This time, I wanted to focus on the skyline – starting the very night we landed, off to Brooklyn we went to capture the latest feature of the Financial District – The Freedom Tower at its famous address: One World Trade Center from across the river: 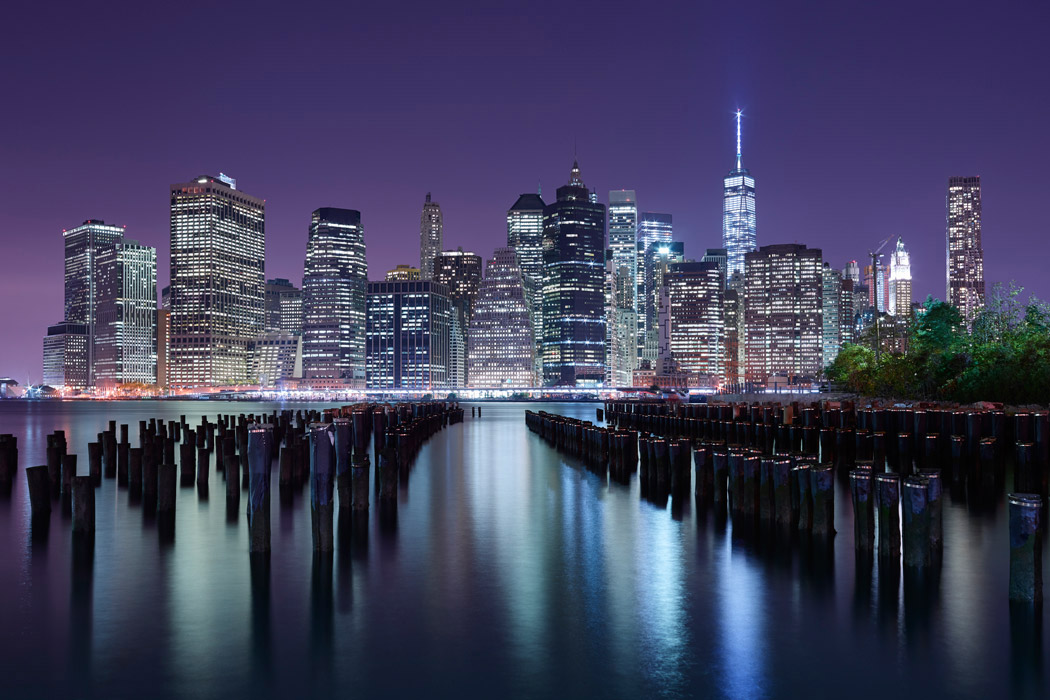 As every traveller knows, jet-lag has its advantages as well as disadvantages – but when shooting cities at sunrise and sunset the ability for your body to want to be up at 4am is pretty handy and these four days were no exception! The image at the top of this post was actually captured on the first morning in New York, having driven to Lincoln Harbor to set up. A few friends had reported bad weather the week before, so I wasn’t hopeful for our heli-shoot that was planned in for afternoon, but hey, it was worth a shot… 😉

Now if anyone wants an “instant jet-lag cure”, I can now confirm that hanging out of the side of a helicopter with no doors on during a 120mph journey across the city does the trick. Wide awake, I clicked away as we positioned into the key places I wanted to capture from above.  I’ll be posting more of these aerial views soon, but this one shot below has to be my favourite – how else to represent the “concrete jungle” of a city surrounded by water? 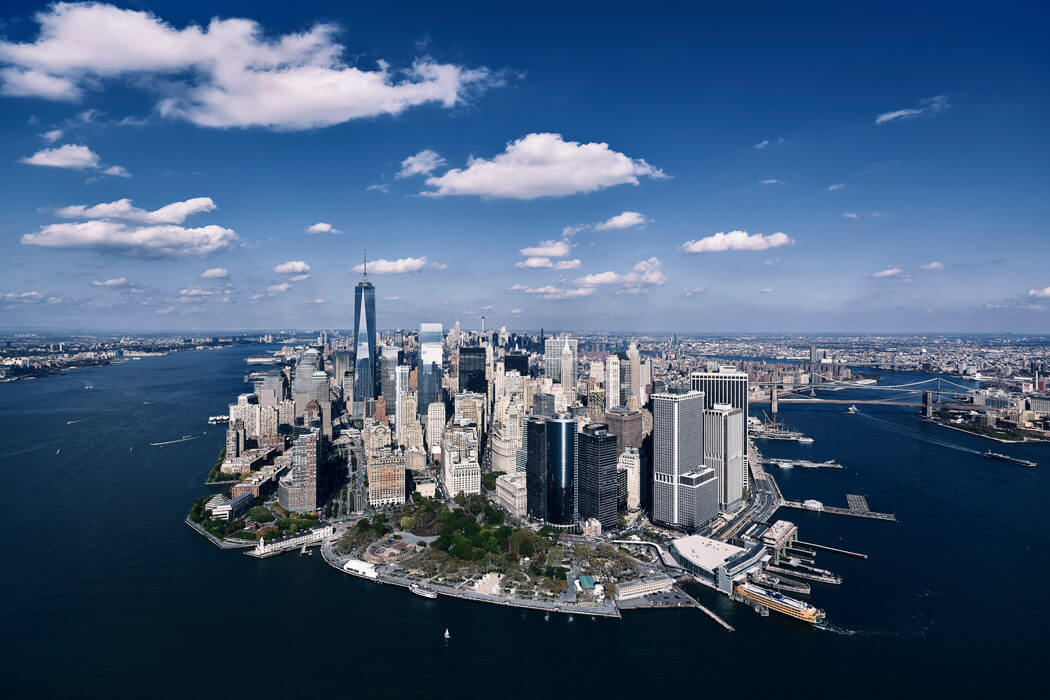 On many photographic trips, not everything on the itinerary is completely up to me – and this was no exception. Shooting a commissioned piece (I’ll explain in the next few months!) meant we took about a day out to find the perfect location to get this shot, twice, of the Queensboro Bridge as it spans across the river to Manhattan. First, from the West:

And then from the East, as we made friends with a rather helpful building that happened to have a fantastic view over the city and across the entire skyline. They may not have been on my original “wish list” for New York, but wow, the city looked great from up there as the clouds rushed by in the wind through the night: 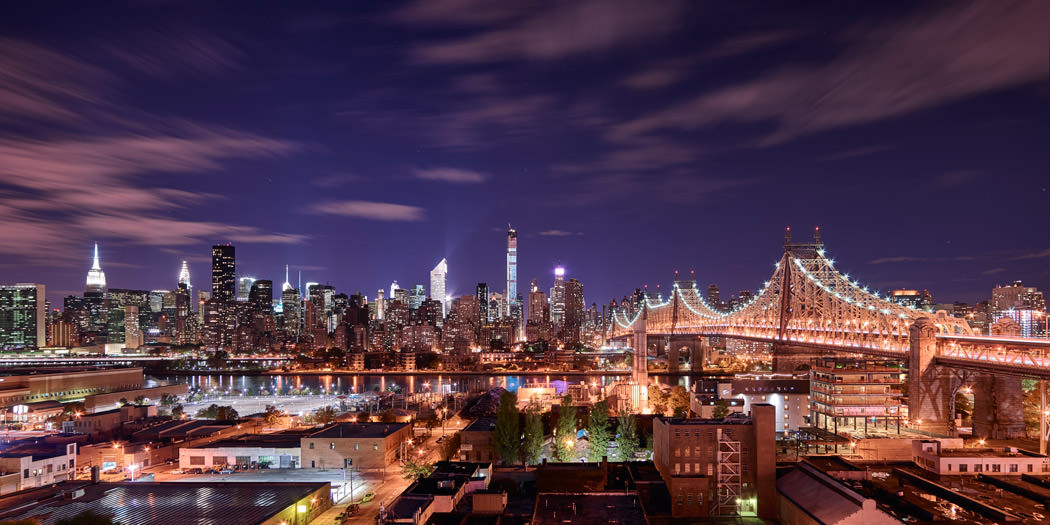 So on to another morning and an (almost) disaster… No, not everything on these shoots goes according to plan! The morning of our Queensboro shoot, I’d actually headed back across to New Jersey to capture the Financial District (or “FiDi” as it’s commonly known) now that the new tower was complete. The wind was a challenge in near-freezing temperatures, but it made for one amazing sky over a 60 second exposure: 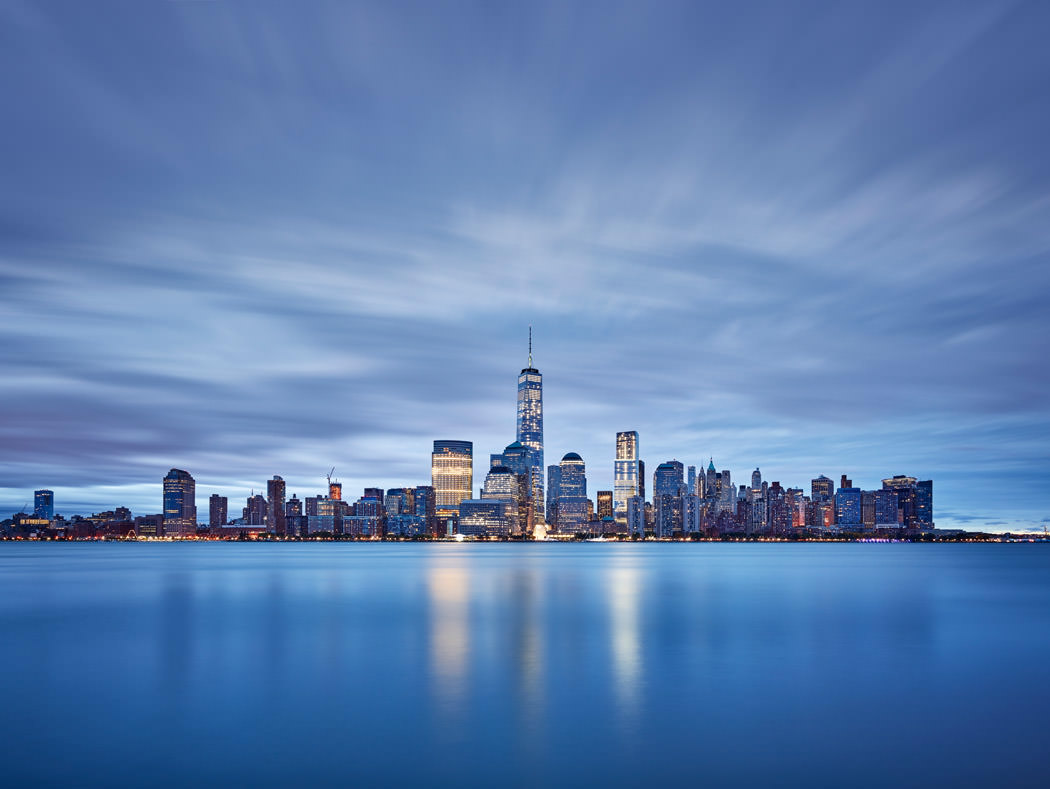 Having captured this shot, while I was happy with it, I felt that I’d missed the real colours of the morning due to the clouds – so I wanted to try again for a second time to get the shot I had in mind. Heading to the same spot, we stood there as the sun slowly came up but something was wrong: The sky where we were was just boring – looking left (north), my heart sank: The sunrise over midtown was phenomenal, and we were 10 minutes south!

Honestly, I have never packed up my equipment so fast in my life. Into the car, we drove back to Lincoln harbour to find a show of reds, oranges, yellows and purples exploding across the sky. Even on an iPhone the scene looked incredible:

But on a medium format camera, wow – I just love this shot. I got lucky too – I took 3 images: A 2 minute exposure (that was sadly affected by camera shake in the wind). A 60 second exposure (this one). And another 60 second exposure that was just too late to get the famous “New Yorker” hotel sign in lights, as the city awoke. Still, 1 out of 3 isn’t bad going for a shoot that was supposed to be a disaster! 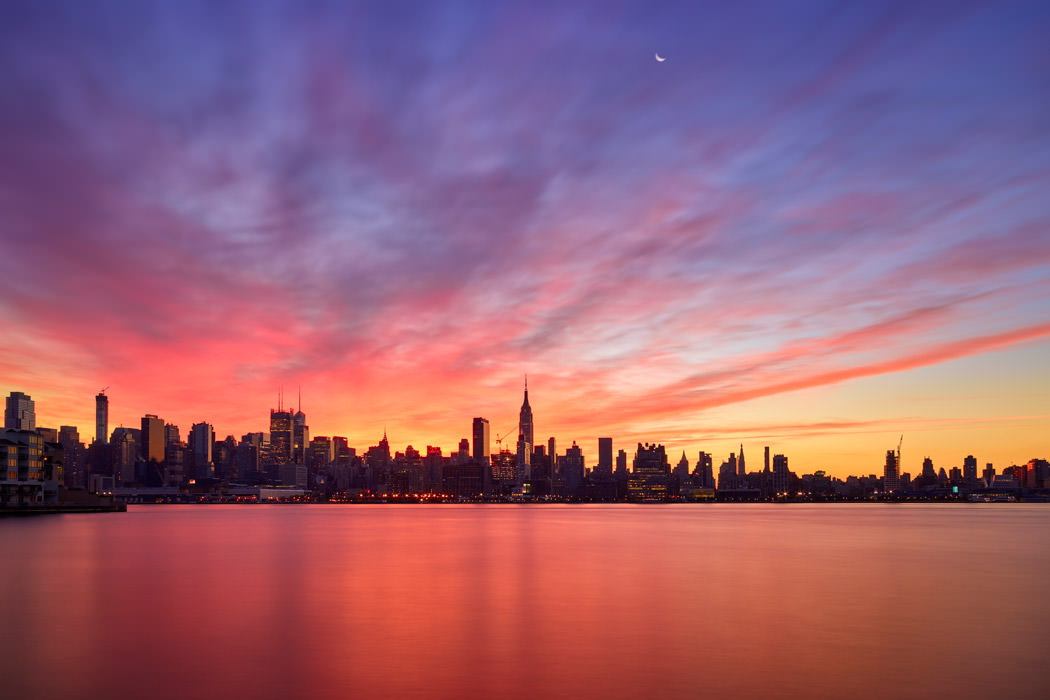 Shooting New York, of course, wouldn’t be complete without capturing the sights of its amazing bridges and lights at night. While the Brooklyn Bridge has been under construction/renovation for the last 3 times I’ve been in the city, it’s still no less impressive when you see it against the backdrop of the city behind at dusk: 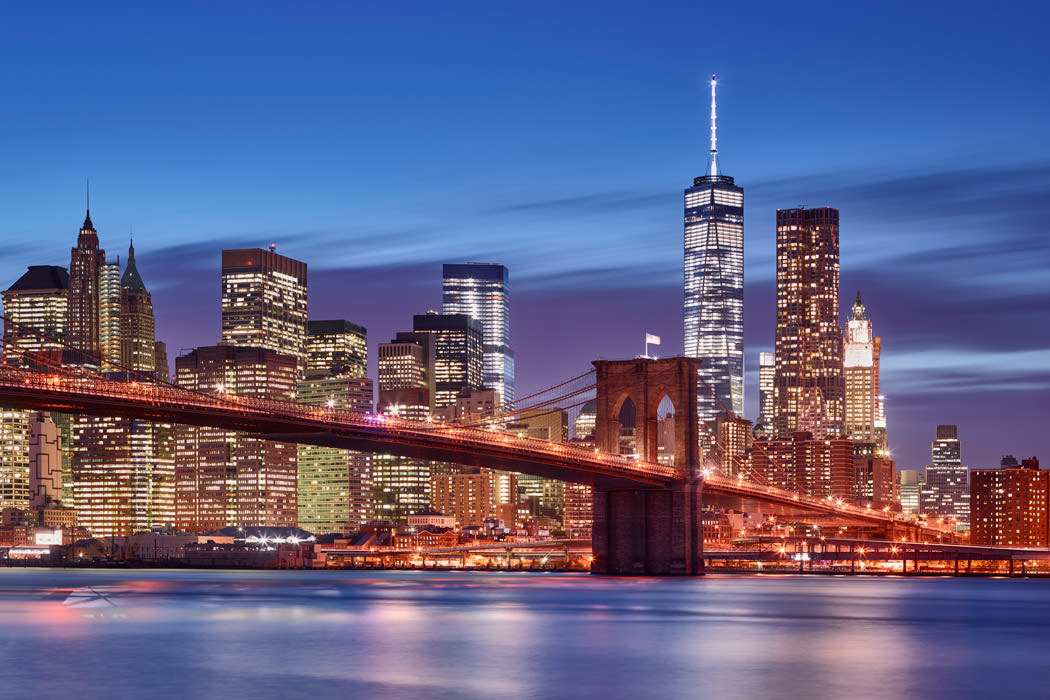 And then it’s the often-neglected sibling, the Manhattan Bridge – just as important, but not as famous, I just love the fact that you can see the Empire State Building “hiding” in the background of this shot: 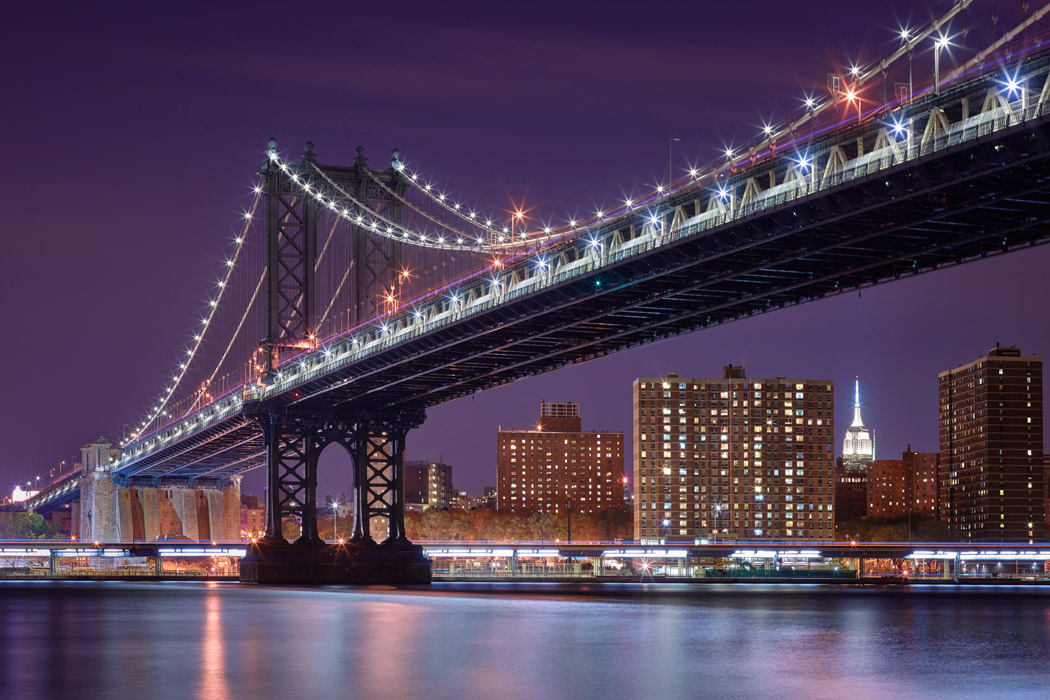 I have to admit I got a little carried away with the bridges, and even turned to black and white to showcase the textures and structure of the Manhattan Bridge the next morning, as the clouds eventually rolled in across the river. As I say, it may not be as famous, but it’s no less impressive! 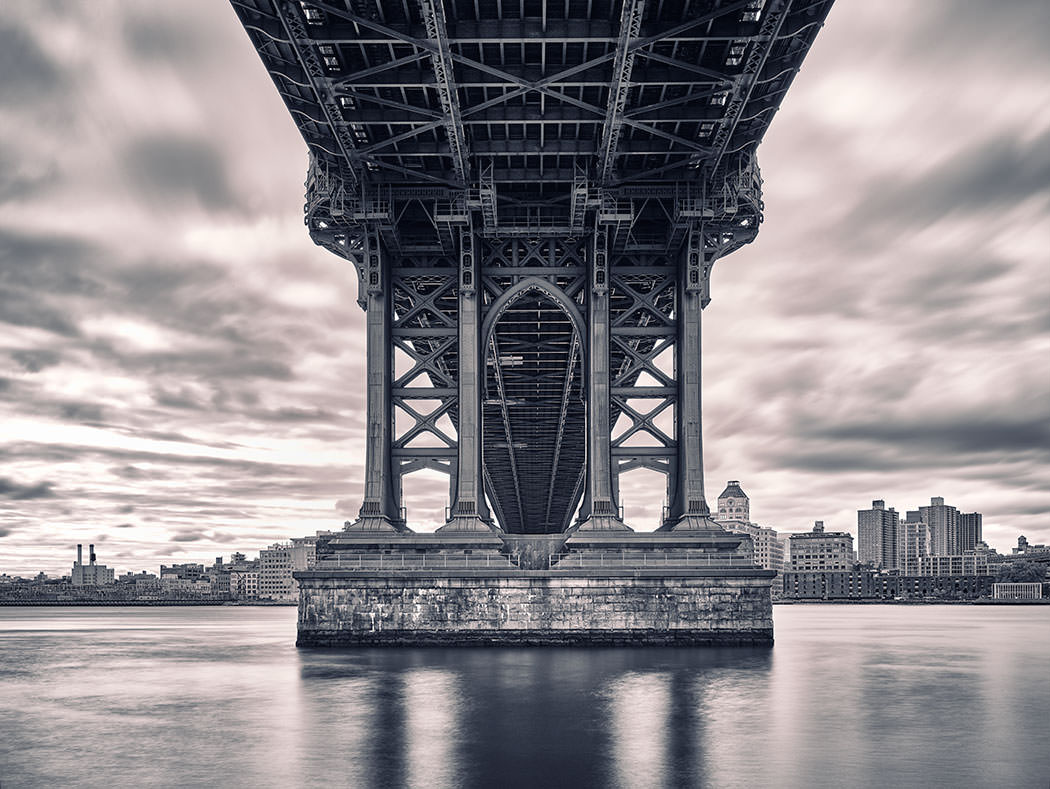 So, my final take-away from my 5 days in New York: The Top of the Rock. I simply love this place. While they don’t allow tripods (without paying to close the entire rooftop for filming), if you’re able to get a good enough spot, it can be the source of some incredible pictures, and memories, of this fantastic city. This really was a last-chance shot on the final night, as we headed to the top around 1.5 hours before sunrise. (If you get there less than an hour before, don’t expect to get a usable spot!). As often happens with the best made plans, however, we arrived to a sky full of clouds and no sun to be seen.

I really wanted to capture a similar shot to my existing “Empire State” image, as it was taken before the Freedom Tower at One World Trade Center was built – but it didn’t look hopeful. We waited, along with what must have been 50 other photographers, and listened as each person’s heart sank towards the time the sun was due to set. But (as often happens), last minute – we got that amazing break: The sun broke through a tiny hole over New Jersey, sending streams of orange and pink light over the city just at the right time.

I’ve never heard so many clicks of a camera shutter – even during press events – it felt like the whole world wanted to capture that one moment that two pink stripes passed behind both the Empire State Building and One World Trade Center for a few moments that evening. And despite the lack of tripod, and space to move, I got it 😉 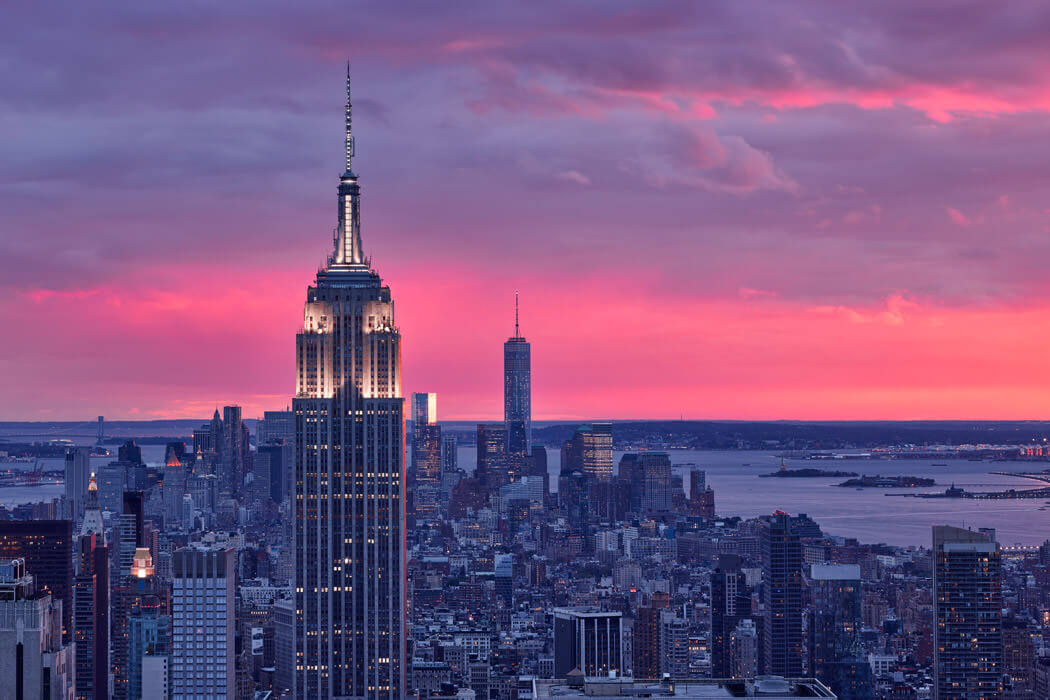 Of course, after such a dazzling display by the sun, it would have been rude to leave before the night showed us what it could do and in that respect, New York never fails to impress. Granted, the lines to get back down nearly ruined any plans for dinner that side of midnight, but wow – images like this just make me want to visit the city again and again and again: 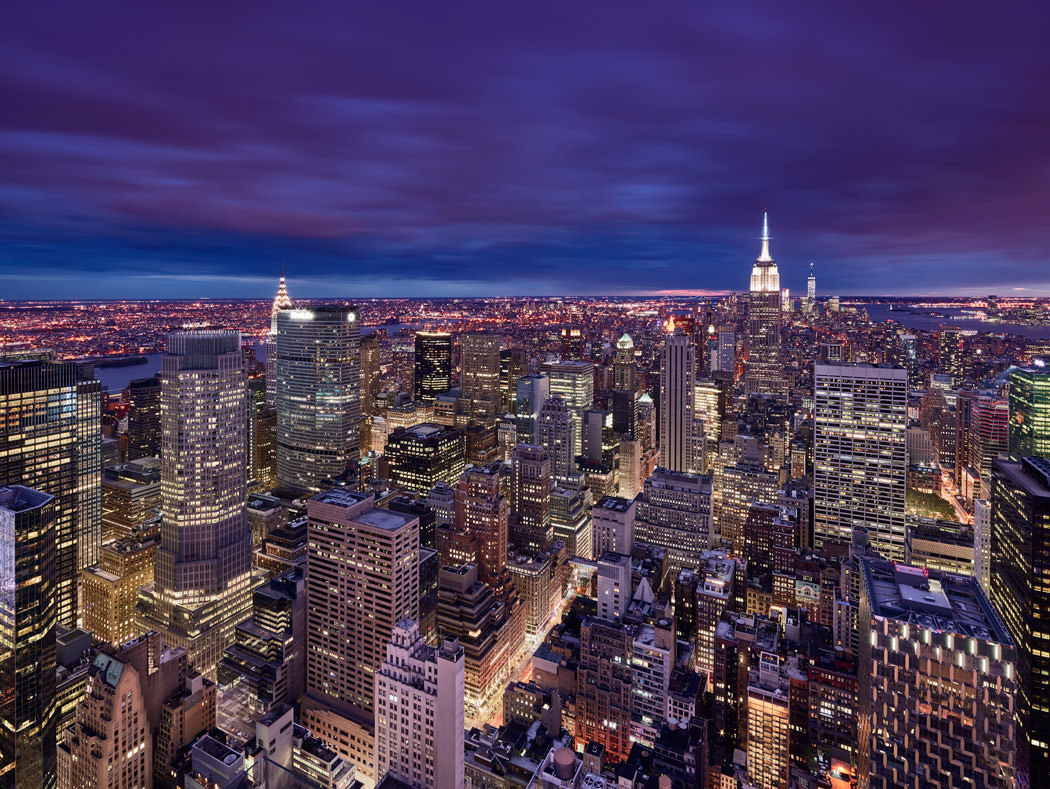 Yes, that last image is one of the “standard views” of Manhattan – but hey, it’s become a famous shot not only because of the number of people who have clicked the button in that direction, but also the simple fact that every single person heading up to the top of the Rockefeller Center does exactly the same:

Walk. Stand. Look. And say the one simple word: “Wow”.

And that is why I’ll always love photographing New York. 🙂

Paul Nominated for The Societies’ Photographer of the Year 2014