Sometimes those unplanned shots are the best. Well, I say “unplanned”, but what I mean is I hadn’t intended to photograph Lyme Regis during this trip back home. Having spent the previous afternoon exploring the quaint town of Lyme Regis, however, meant the lure of the next morning’s sunrise was simply too great – and look at what I got: 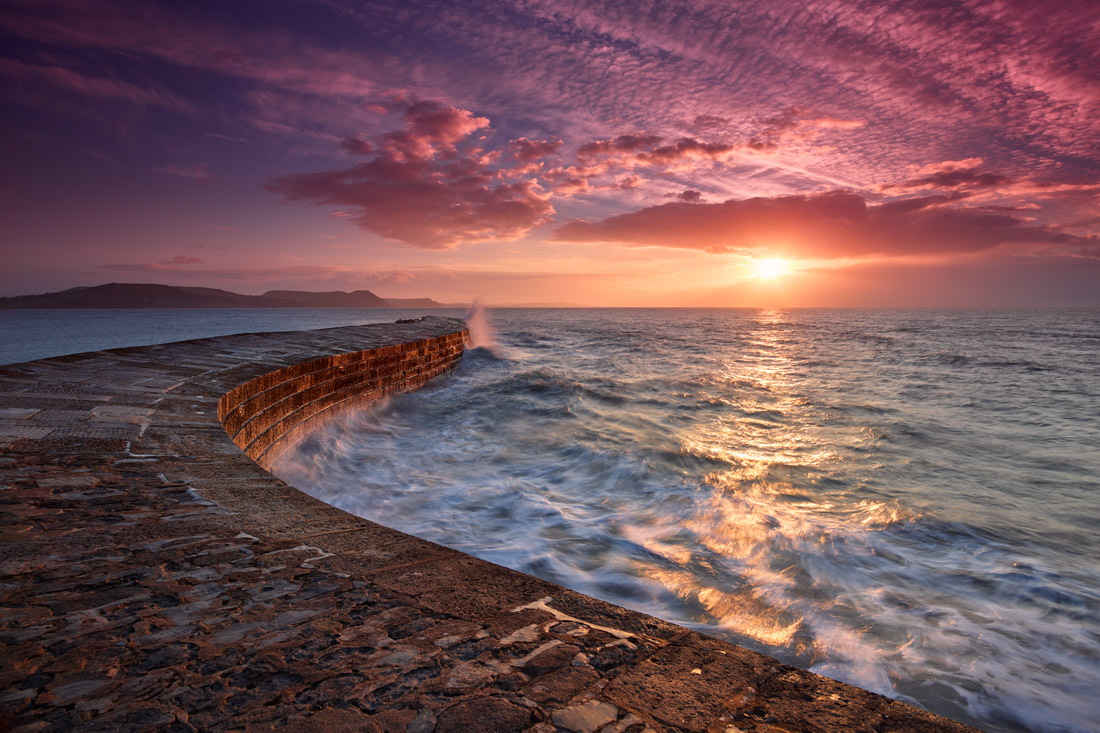 As always, there’s a bit of an emotional rollercoaster involved in shooting sunrises and sunsets overwater. You need cloud – not too much, but not too little; you need a clear shot of the sun, but not head-on; you need a calm enough wind to allow for a long exposure, but not so calm that the sea is flat and dull; and of course, when it comes to standing on sea defences – you need the weather to be kind enough to not cover you and your equipment in water!

Arriving at Lyme Regis before sunrise, I was met with a pretty disappointing view. Fishermen were getting ready to head out to sea, and the town was slowly coming to life, but the shot I was looking for looked at risk : cloud was forming, fast.

What had started out as a (luckily) relatively clear sky, despite the forecast for rain all day, started turning against me. The sea was perfect – a few small crashes here and there, but otherwise calm enough to allow for a half-second or second-long exposure to capture the motion. Visibility was clear too – but as time ticked on, past the official sunrise, there was no point of light to be seen. 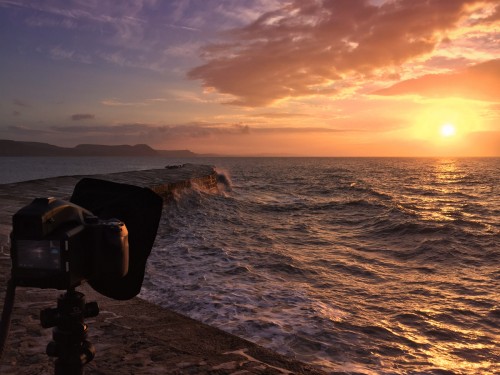 Of course, these stories only have two potential outcomes – and you can guess from the shot above how this one turns out 😉

Last-minute (around 15 minutes after the sun should have appeared), the illusive rays started to appear between the clouds. Another few minutes, and there was a complete sun blasting through – but it was clear it would be short-lived. The view was stunning, however, and even the iPhone shot (to the right) managed to do it justice.

I was already set up with my Cokin filters at this point and knew that the slightly pink cast caused by the mix of the 154 and 121 (ND and ND Grad) combination would actually bring something to the image this time. I had a window of maybe 2-3 minutes to capture the shot I had been waiting for – but as always, there are challenges, and in this instance there were two:

First, finding the perfect wave combination (I wanted a crash against the sea wall) to go with the sun-flare on the horizon. Luckily, with waves coming in every 8-10 seconds, this wasn’t going to be too difficult.

Second, however, was a little more tricky: People like to take their morning strolls and dog walks along The Cobb!

Dodging between walkers, clouds and waves, I finally managed to capture 6 images that worked. Looking at the sea structure in combination with the sky, “breakwater” was my favourite, and is now available as a limited edition print.

As for Lyme Regis? Well, it’s a fantastic little town to visit with loads of character and fantastic seafood. So much so, I think it’s going to have to be the destination for dinner tonight as well 😉