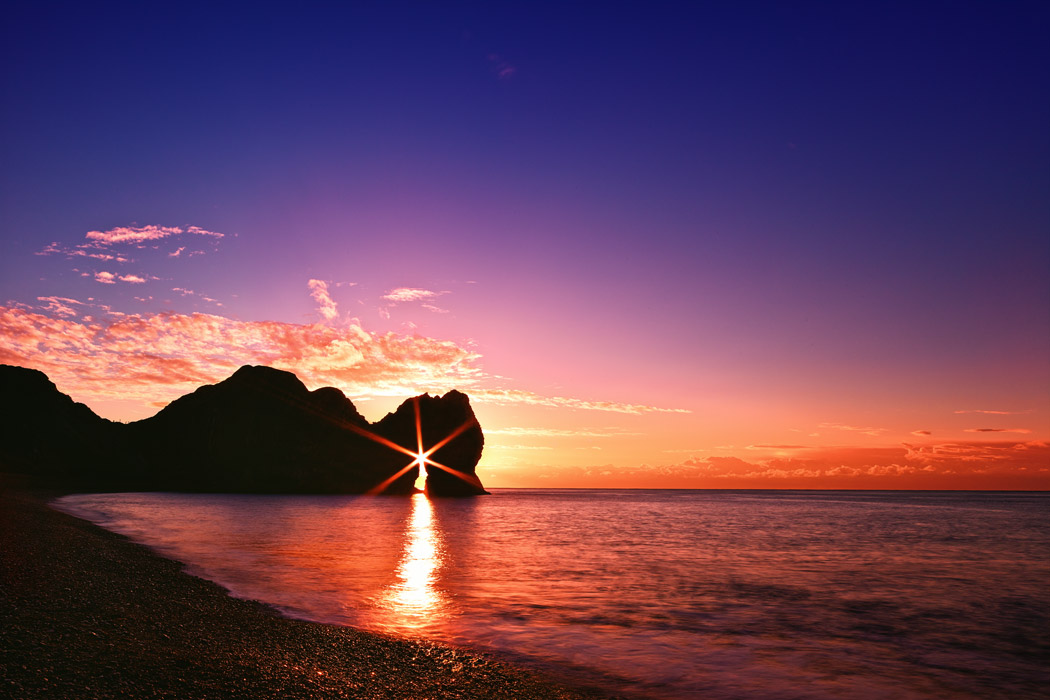 Wow – what a morning it turned out to be!

Preparing for the worst, having checked the weather forecast the week before I arrived back home to England, I wasn’t expecting anywhere near this shot when I arrived at Dorset’s Jurassic Coast – getting ready to (hopefully) capture Durdle Door at sunrise.

There’s a small window in the year when the sun rises just perfectly through the arch. It’s south enough to allow you to shoot it from the beach, and sunrise itself is late enough to not mean a 4am start from my house in Weymouth! A 6am start wasn’t much better, but jetlag was on my side this time as well as the tea-laden company of a good friend of mine, Nick Dempsey. Nick was there when I managed to capture Pulpit Rock for publishing around the world – so maybe he’s my winter’s day “lucky charm”.  Who knows, but the morning turned out for the best.

Arriving at the closed campsite is a little eerie. Having grown up along the Dorset coast, I’m used to Durdle Door (and the whole Jurassic Coastline for that matter) being packed with tourists. In the past few years, the recent spell of landslides (some fatal) along the coast have certainly put some visitors off, but the landscape remains as beautiful and dramatic as ever. During the walk down the hill in the freezing cold, I commented to Nick that we were doomed – a cloud bank was arriving just perfectly over the spot where the sun was due to rise. Still, “we’re here now” and all, so we carried on down the (now) mud bank to get to the beach.

Of course, the timing isn’t a secret and another 3 photographers were there with the same idea – most with their “TPE” app to ensure they were in the perfect spot to catch the sun’s rays through the natural arch in the rock. I didn’t hold out much hope, so in the interests of avoiding a wasted journey, grabbed this shot of the moonlight over the arch with a long exposure. It’s cold down there at that time of the morning and I hope this image gets that across! 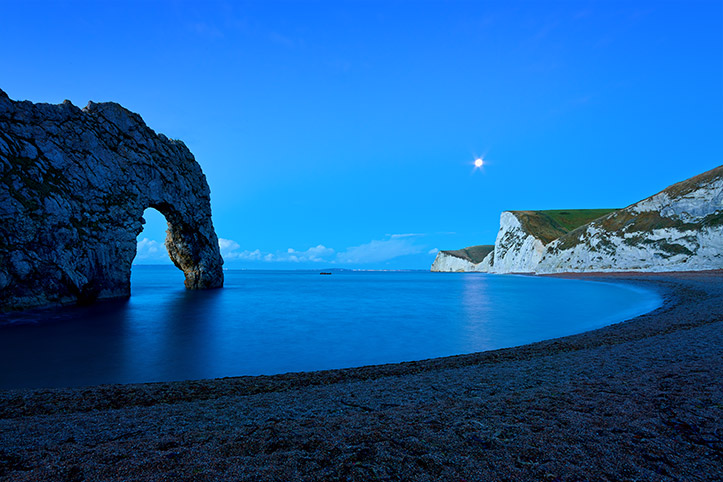 So, onwards and upwards, we trekked along the beach (to where the brown stones meet the grey stones on the right of the image above) with the very slight hope that the cloud bank might make way for us. I only had 3 more sunrises in England (and had other landscape photography plans!) so I wasn’t feeling good at this point. The other photographers set up, noticed it was a few minutes past sunrise and, just like me, started looking around to see if anything else could be photographed as it simply wasn’t happening.

And then… (as they say in all good suspense novels!) I noticed one guy moving. You could see run rays on the white cliffs – everyone ran to the water’s edge. It was late, and a little higher than I’d hoped for, but we had about a 2 minute window of when the sun had somehow managed to break through the cloud and hadn’t quite hit the top of the arch! Nick (in the picture below) started snapping away, I moved all my gear across to where they were and did the same….

…and we got it! One poor guy got very wet as the sea attacked his tripod while shooting. Fair play to him, he carried on, but I’m definitely thankful for my remote trigger that allows me to keep one eye on the subject and another on the waves! It turned out well though, I think – certainly better than expected!

As a fan of McDonalds (in certain situations!) I couldn’t help but love the irony of stopping off for breakfast there that morning – maybe I’d just managed to capture the third of the Golden Arches…!