After a gruelling CES in Las Vegas, a free day in San Francisco was just what I needed, and the prospect of spending the day shooting with a great photographer friend of mine – Scott Marrs – was not to be missed 🙂

With my new Canon 16-35mm f/2.8 L II in my bag, it was time to get the tripod and ND filters out to go grab some images. We actually spent the day north of the bay – shooting around Point Reyes and Bolinas Bay – but I was keen to get some sunrise/sunset images from around the San Francisco Bay itself with my new toy… 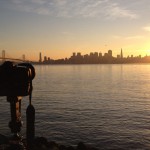 The night before, I’d actually been out to Treasure Island to shoot some sunset images. At the bottom of this post, you’ll find a google map with three locations pinpointed – the red one being the location of the night-time city skyline image at the top. It wasn’t exactly quiet where I was either, as it seems it’s a popular spot for photographers! One thing I would say about this 16-35mm lens, it can capture a LOT of the scene. Before the light (and temperature!) dropped to capture that first image, I’d actually managed to get this shot just after sunset. That’s Treasure Island on the left, right the way around to the southern tip of Alcatraz and the Golden Gate Bridge in the distance – and that was only taken at 21mm…

On to the morning, and I collected Scott from his apartment at 6:30 and we headed to a few locations on the coast just before sunrise itself. I have shot the Golden Gate Bridge at sunrise before, but this time wanted a different angle – so we headed to Fort Point (the blue pin on the map) and found a little hole in the wire fence, right in front of a police officer waiting in his car. While it was clear that I couldn’t get away with avoiding the fence, a quick juggle with my tripod and I managed to at least get my camera lens through 🙂 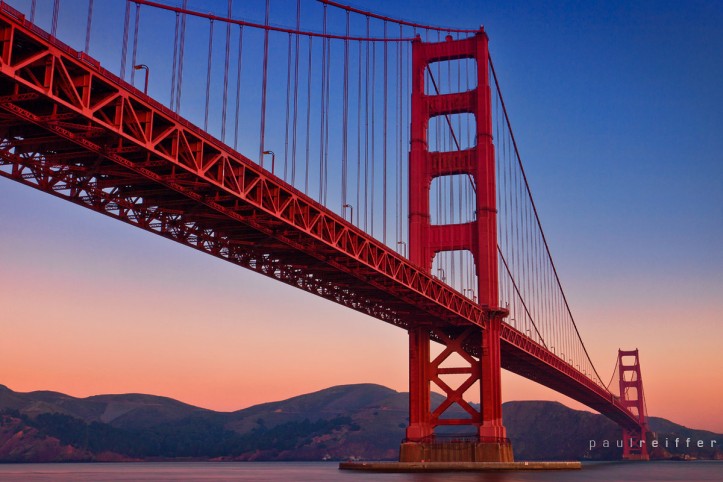 Now, why would I shoot this only at sunrise? Simple – while the sun actually rises in the opposite direction, so does the haze. If you look west at sunrise, you’ll notice the bridge coming to life with bright reds and oranges that often get washed out during the day – this, is the shot of the bridge I wanted 🙂

After shooting around the Palace of Fine Arts for a short while, we headed north to a few little towns and into the National Parks in Marin County before returning back just before sunset. 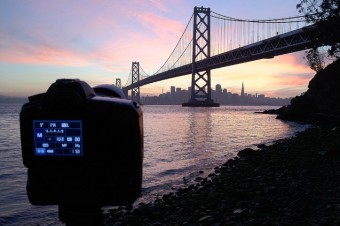 Having done some research the night before (and with the help of a certain flickr user 😉 ) I got the location of the one place I wanted to shoot from to get a “fresh” look at the city (the green dot on the map). Without going into detail, this is NOT an easy place to get to. There are no paths, no parking locations, it’s not signposted, and I ruined a good pair of shoes (and very nearly my neck!) in the process of getting down the 300+ ft to the bottom.

With Scott waiting at the top, it was lonely down there! Especially when I knew I wanted to get 3 different shots: The sun flare over the city just before sunset, the red sky just after sunset and then finally a night shot – and that l would take around 2 hours of elapsed time to capture.

Unfortunately, I also hadn’t predicted quite how dark it would get there (as well as factoring in the “graceful fall” down the last part of the hill) so I decided to skip my “night shot” from the three in the interest of being able to get back up along with my tripod and camera gear on my back with at least some light. So, settling for a “city lights” shot, without the fully black sky, I snapped away… 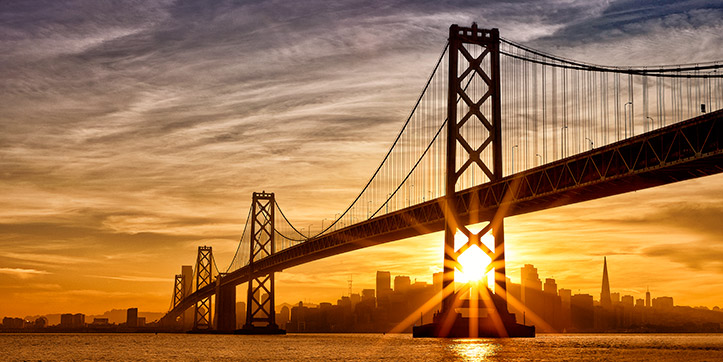 First up, the sun couldn’t have framed itself better for me – right between the steel and concrete of the bridge tower!

After a little while, the sun disappeared and those clouds really did their job well – reflecting all the warm red colours straight back at me, over the city. I was initially worried about the contrast of the bridge against the city, and whether it would look too washed out, but my camera (and lens) did me proud – and I love the pastel shades they both delivered:

“The City By The Bay” – Print available to buy now

Now, as I mentioned – I wasn’t too keen to be stuck at the bottom of that hill/cliff when there was absolutely no light whatsoever. While there were helicopters and boats around, I’m not too sure I wanted to have to ask one for a ride. 😉 So, this is as late as I stayed – just long enough for the city lights to come alive, but not quite long enough for complete darkness in the sky. I chose, as well, to go wider and from a slightly different position on the beach, so that the shot goes as far North as to capture Coit Tower in the distance. 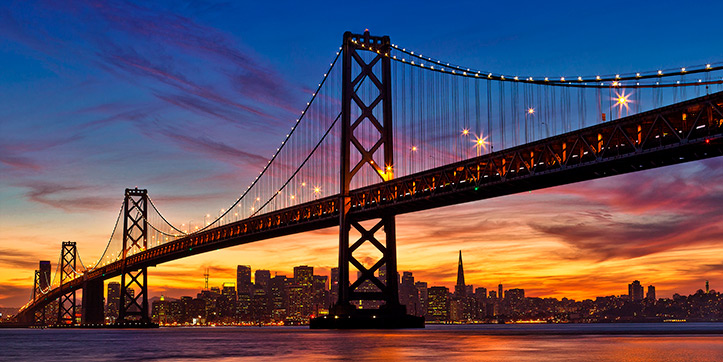 The only issue remaining – which one I prefer…!

Anyway, there you have it. A collection of images of the same thing, in the same 24 hours, but from very different vantage points. I personally think the shots under the Bay Bridge were worth the “risk” (I know others will disagree) and I’m really happy with how they’ve turned out.

For anybody wanting a go at capturing the same sort of shots – the map of locations is below:  🙂