With a backdrop of established businesses – La Senza, Peacocks, Comet, etc heading for (or indeed buried in) administration, I guess it was only a matter of time before one of the “big studios” would go to the wall. It seems first up is Doubletake Studios…

For clarity, I am nothing to do with Double-Take studios, and never have been! (Some people seem to have confused themselves by not reading the content of my post and have assumed they should contact me for their missing pictures. Sorry, I’m unable to help you :cry:) 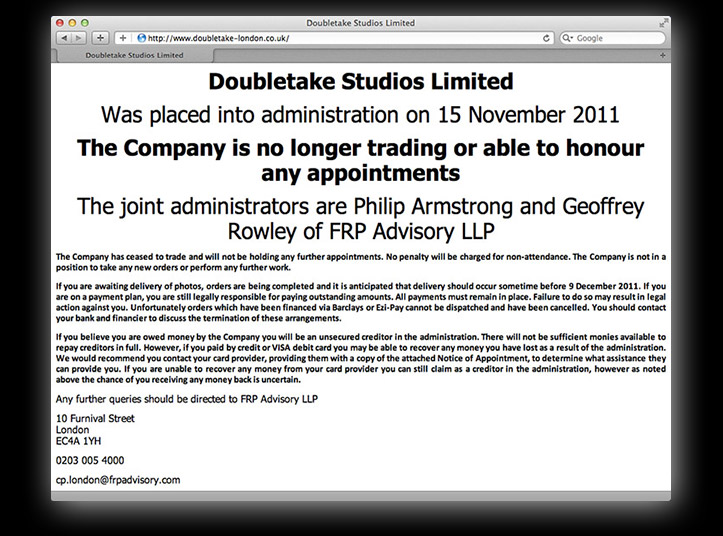 Now, to clarify, it’s NEVER a good thing in my mind when people lose their jobs – and I really do, genuinely, feel for those who have as a result of the demise of Doubletake. But I guess that’s where my sympathy stops.

As a “mystery shopper”, I’ve had first-hand experience of companies such as Doubletake and “New ID Studios” (previously New ID Experiences). Indeed, I can only say what I’m about to say as a result of being a previous “customer” of theirs – but I’m happy one is gone, and I can only hope others heed such warnings about the others.

You see, there are professional photographers out there. People who have integrity around the images they produce. These are the people who genuinely want to do a good job – those who want to make sure that every single client walks out of the door with images they’re not just happy with, but images that make them smile for days on end. That’s the side of the industry I believe entered in to.

Then, there are the “makeover studios”. The guys who offer “£25 photoshoots”, or “wow – you’ve won a competition”. Great, you get a fantastic deal – a “free photoshoot” (or heavily discounted, at least) with all the trimmings… Only, it’s not. Why is it that everyone who walks in on a “free” photoshoot ends up in a closed room with a sales guy (NOT a photographer) and leaves with a bill for, in some cases, over £1,500? That’s right – it’s a business built on playing with peoples emotions.

While this may sound like a rant, I can say hand-on-heart that I believe the right business model will succeed. And if people loved the business models of such “studios”, I’m sure they would have been a success. The fact that many of them have already collapsed? Well, need I say more. I guess there just weren’t enough “heavy-sales” out there to keep them afloat.

I just hope others out there have their eyes open enough to realise what they’re getting in to with their “free” shoots before walking out with a finance agreement for over £1,500… Of course, if anyone wants a shoot – don’t hesitate to get in touch or book one today 🙂

Update – March 2013 : It seems New ID Experiences/Studios has also now gone into administration. Be careful though, these places have a habit of popping up again under a different name in future… 🙁