It was only the other day that I realised I’d been updating my Facebook and twitter accounts with a lot more landscape images than I had been uploading on to here. Time to get that corrected!

This first shot was taken in August – at Devil’s Golf Course in Death Valley National Park.  What had started out as a really grey day soon burned off to reveal a deep blue sky.  What you’re looking at is actually salt and rock – from many years ago when this used to be underwater.  With an outside temperature of 120 degrees, we didn’t hang around long (especially as the salt in the air really gets in your eyes when you get down low!).  Obviously this has an ND filter in use (x8), but I also ended up having to pop a polariser over the top as well – as even my sunglasses gave up the ghost with the brightness in the park.

Next up, Grand Canyon National Park.  There are two key places people visit – the “West Rim” (with its rip-off “Skywalk” glass walkway attraction where they refuse to allow you to take your camera onto it but are more than happy to sell you their photos!) and the “South Rim” – which is where some of the more recognisable views can be found.  I tried shooting at sunset, and while the colours of the rocks looked fantastic, I really wasn’t happy with the result.  The canyon is just so large, photographs really don’t do it any justice – everything just seems so flat.  So in an effort to try and get some depth in what happens as the sun hits the horizon, I shot this at sunrise instead (in the freezing cold at around 4:50am!).  While many would use filters and a long exposure, this was actually shot at f/13 for 1/60sec with nothing other than a UV filter on the lens.  Pretty happy with that sky, too – as it didn’t look too promising when we first arrived!

Then on to Bryce Canyon in Utah.  Apart from the distinctly watered down taste to beer, this was a great two days wandering around the “hoodoos” and trying to capture them in a way that shows how vast the place is.  I put up a more detailed post – here – on Bryce Canyon a while back, but this is my favourite from the visit, taken just before the sun set on the horizon as unfortunately it dropped behind cloud before the deep reds and purples could appear.  Still, I’m happy with the shot (it’s another f/13, at 1/80th and a polariser) 🙂 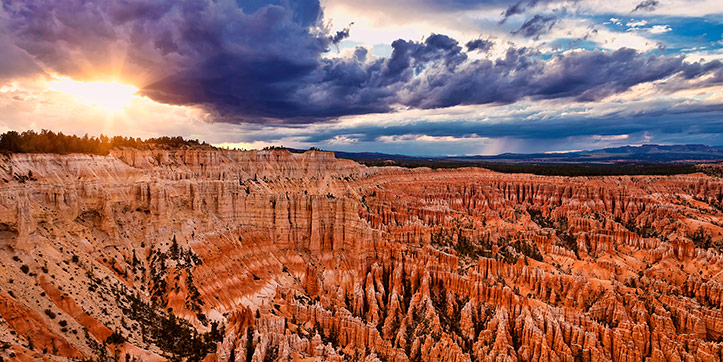 A few of you will recognise this shot, I’m sure.  It’s the “mittens” in Monument Valley – and while not a “National Park” as such, it has the same feel about it while you’re there.  These things are MASSIVE, and you can drive the dirt-tracks off-road all over the park, exploring around the huge rocks.  When we got to the park, I have to admit, I was in a bit of a sulk – the sky was overcast and it looked like nothing good was going to come from it.  Then at sunset, as it dropped behind me, the deep orange dirt (which now encapsulated our truck) just came to life bouncing warm colours all over the place.  To put into context, this image has had its saturation boosted by only 5% from the raw file.  While I’m sure there are better photographs of the mittens at sunset – I really love the colours that hit my lens.  Yeah, it’s annoying that we turned back only 1/2 a mile from “that famous point with the road leading in to the Valley” (oops!) but nevertheless, I like the shot I got.  Better still, it was hand-held at 1/20th, f/7.1 (the image stabiliser on my 24-105L really worked for its money that day!) 🙂

Last, but certainly not least, is a shot I took on the way up to San Francisco last month. Half-way between Los Angeles and San Francisco is a really cool cluster of little towns, centred around San Luis Obispo.  Travel out to the coast from there, where we were staying, and you’ll hit Morro Bay – and unmistakably, Morro Rock (home to the peregrine falcon).  Getting this shot was a challenge, as the number of people wanting to capture the sunset was surprising for such a small harbour-town, but I managed to persuade some very friendly visitors to let me grab the pier for (literally) 4 clicks!  Luckily, given that I was using 1/4 second at f/16, we’d been there long enough to have the setup done and the camera set up on the tripod, so it was an easy enough shot to get in the 10 seconds of “empty pier” I was able to grab!  (The only issue being, it took around 5 seconds for the rickety old pier to stop wobbling after they walked behind me!

On all of these, I’ve made the change to shooting landscapes at 2 x 1 instead of the camera’s native 3 x 2.  While I love the fact that the full frame gives me room to capture more detail in the sky, or up close; looking at these alongside their un-cropped counterparts, I’m now certain that when it comes to shooting national parks or sunsets, less really is more.