This is Andy Neate.

For 2011, he’s joined Tom Chilton at Aon/Ford in the British Touring Car Championship, having overcome an absolutely horrendous injury in 2008. Back then, he nearly ended up paralysed from the neck down, having sustained pretty much what Christopher Reeve had to deal with only this was at 150mph. When Andy contacted me for a shoot, I honestly had no idea about the background to this incredible guy – but there you go, every now and then someone pops up who really does have that something special. 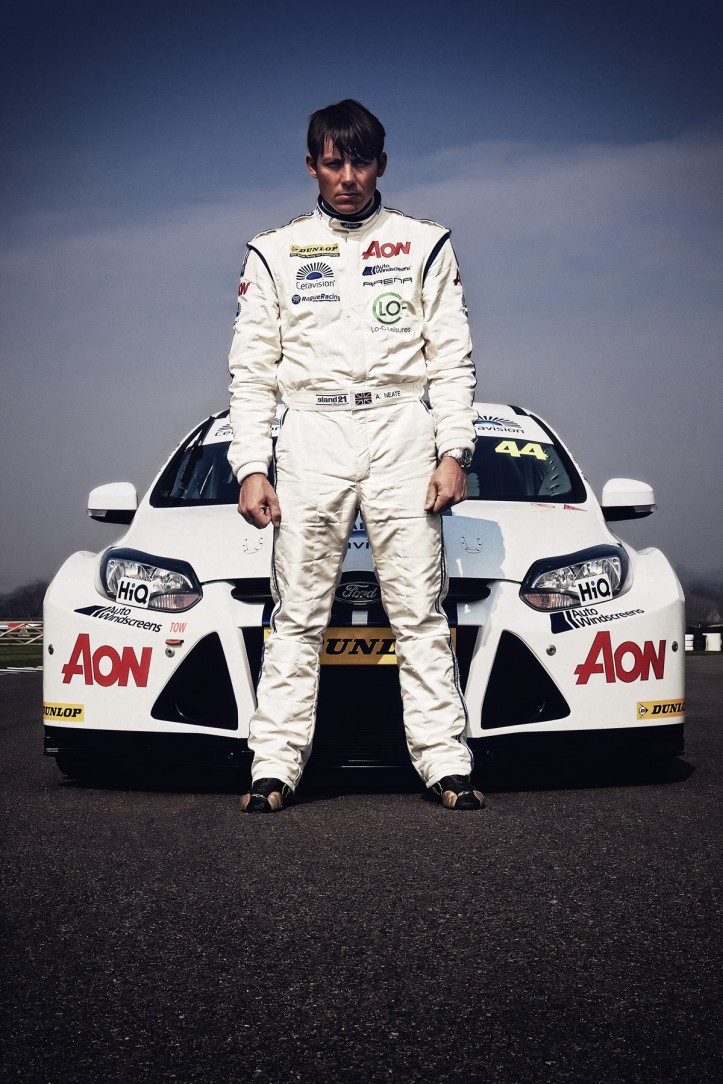 Just over 2 years since nearly being paralysed – surgery scars still evident, Andy met us on a chilly morning at Goodwood with the rest of his team and the car for some promo shots. Being someone who concentrates more on photography than motor racing, I have to say, I was shocked. My “assistance” is sometimes provided by a helper with a reflector when shooting in natural light; Andy’s “team” was 6-strong, with a huge truck which houses not only the car on a hydraulic platform, but also every single spare part imaginable, sleeping facilities and all of the “gear” these guys need to run a race weekend.

Goodwood were kind enough to give us an hour “clear” where the track was shut down from those already using it for our exclusive access – including the famous “Super Shell” chicane. I have to admit, it’s quite an experience shooting on a closed off race-track, with a driver and car who you know are both going to go through hell in a weeks’ time around a similar circuit. (Evidently, we’ll never see that same car in one piece again!)

Andy wanted a range of shots – from race/promo style, through to more relaxed images of “just him”. Out of the 3-4 hours of shooting, we still have quite a few to sort through together, but here’s the quick preview of a few of them 🙂

PS – He’s racing this weekend at Brands Hatch – 2nd and 3rd April.  If ever you had to support a driver, rather than a team, I can guarantee this guy is worth keeping an eye on.  The incident a few years back aside, I can honestly say Andy really deserves to do well – the guy’s a superstar 🙂