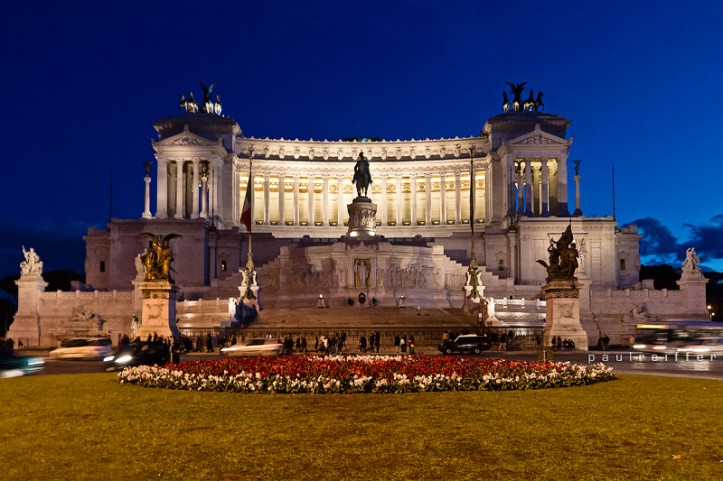 In what turned out to be a somewhat bittersweet trip, my latest trip to Rome allowed me to photograph some “non-standard” shots instead of focusing on the main tourist landmarks as my previous (and first) visit had done.  The “bittersweet” part?  Well, who can forget the stranded thousands due to the snow at London’s Heathrow airport – unfortunately, British Airways seem to be in the list of those who can, as for all they know as of writing this post, we’re still stuck there!

With my hatred for anything to do with BA now out in the open, let’s delve into the images…  Unfortunately, what was supposed to be a relaxing 2 day break ended up as a 1 day illness-ridden tour followed by 2 more days of trying to get out of there, despite all of that – I did manage to capture one or two different styles of image.  A lot of the original images I shot of Rome (including St. Peter’s Basilica, Spanish Steps and the Colosseum) can be found in the landscapes section of my portfolio.

First off, the image above – the “Monument to Vittorio Emanuele II”.  Having seen it covered in scaffolding last February, it was refreshing to see it (mostly) revealed in all its glory.  It turns out that Rome is split on the building’s existence – some love it, some loathe it – but regardless, it’s a tourist magnet and looked great at night.

Staying at the Intercontinental at the top of the Spanish Steps has some great benefits; we were at the centre of all the action, the buzz, and near to the tourist areas.  But at the same time, it was only a 2 minute walk in any direction to get to somewhere a little more “local”. 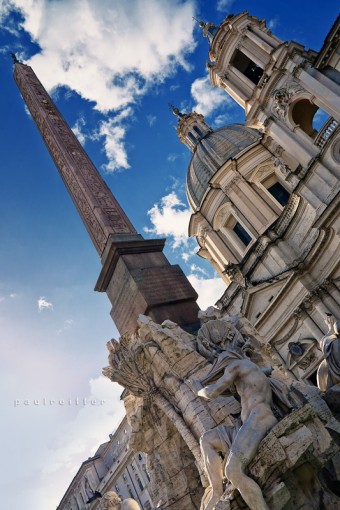 For the first morning, however, it was the classic trip to Piazza Navona (one of Vic’s favourite places) to take a look around the Christmas market and soak up the atmosphere.  Having flown from a snow-filled England, we were greeted with a surprisingly clear sky with lots of warmth from the sun.  Perfect for capturing this image, slightly back-lit, of one of the many fountains and statues in the square.

Just a short walk from the Piazza, was a little side-street that I had noticed back in February.  While there was nothing “going on”, the mish-mash of buildings, the grime, the little sign to a local business and those fantastic steps just forced me to capture this “as I saw it”.  To me, this is the real (back-street) Rome, without all the price hikes and tourist patter that is all over many parts of the rest of the city… 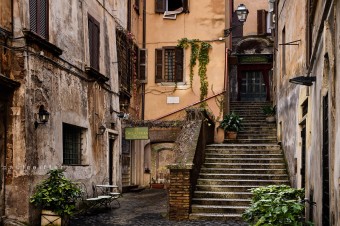 So, onwards and upwards to St. Peter’s – where last time, we saw the Pope’s address.  The downside to the Pope speaking?  Lots and lots and lots of people – this time, we were luckier.  I managed to capture both the inside and outside of one of the two huge “arms” made up of pillars which extend from the Basilica.  The images don’t really do the scale of the buildings justice, and this is a must-see. 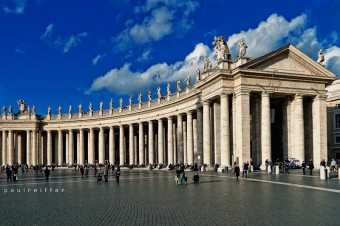 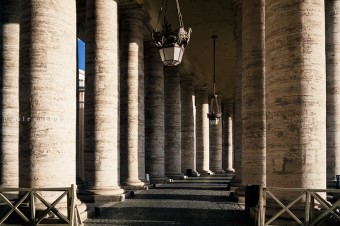 Now, last time we were in Rome, I missed out on one key place – the Vatican.  It turns out (d’oh!) that it’s shut on a Sunday…  (Yeah, should have figured that one out, I know!).  Anyway, this time, there was no missing it.  Inside, you wind through miles of corridors through chapel after chapel, with ancient artefacts from all over the world; the whole time, being looked down on by thousands of paintings on the ceiling.  Alas, the famous “Michelangelo Finger” painting in the Sistine Chapel was housed in an area where cameras weren’t even allowed to be held, let alone used, so I missed that one (I guess, in part to ensure better sales of their “official” replicas and other classy merchandise such as Pope lollipops… 😉 ).  But I did manage to capture one of the ceilings as we walked through to give you at least an idea of the detail involved: 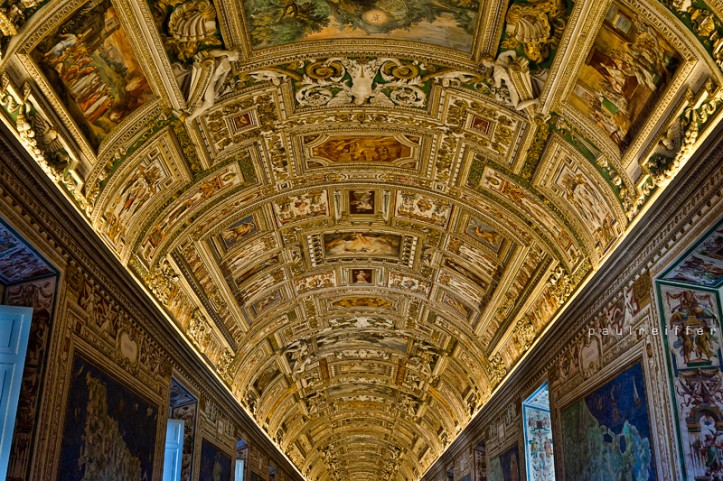 Of course, there are many other photos taken throughout the day, but these at least give an idea of some of the sights that I missed and that weren’t previously in my portfolio!  Despite only having a small amount of “useful time” in Rome, I did get to see some of the bits I’d missed. 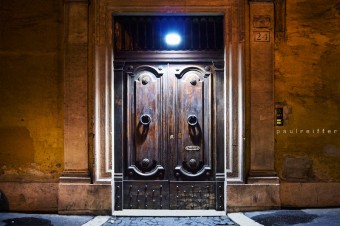 Oh, and I can’t forget one other street.  Via Gregoriana – on which this amazing door is situated.  (Yes, I’d love that door – what an entrance! – just a shame about the 2007 buzzer system they felt the need to add…!)

Strangely, this wasn’t the attraction of Via Gregoriana – a small little bar called “Gregory’s” at 54a is why we went.  I’ve never been to a jazz club before, but what a little find.  An amazing array of drinks downstairs, what *seemed* to be mainly locals inside, and a full-on “jaaaaaaazz cluuuuub” atmosphere upstairs with red velvet sofas, table service and live music!  Get there if you can 🙂

Next up?  Some of the edits from the “couple shoot” I did in San Francisco…