It’s one of landscape photography’s “big ticks” – that shot of the fishermans cottages in the shadow of Lofoten’s mountain range in Hamnøy; one of the archipelago’s tiny islands connected by bridges that span for miles across the region. 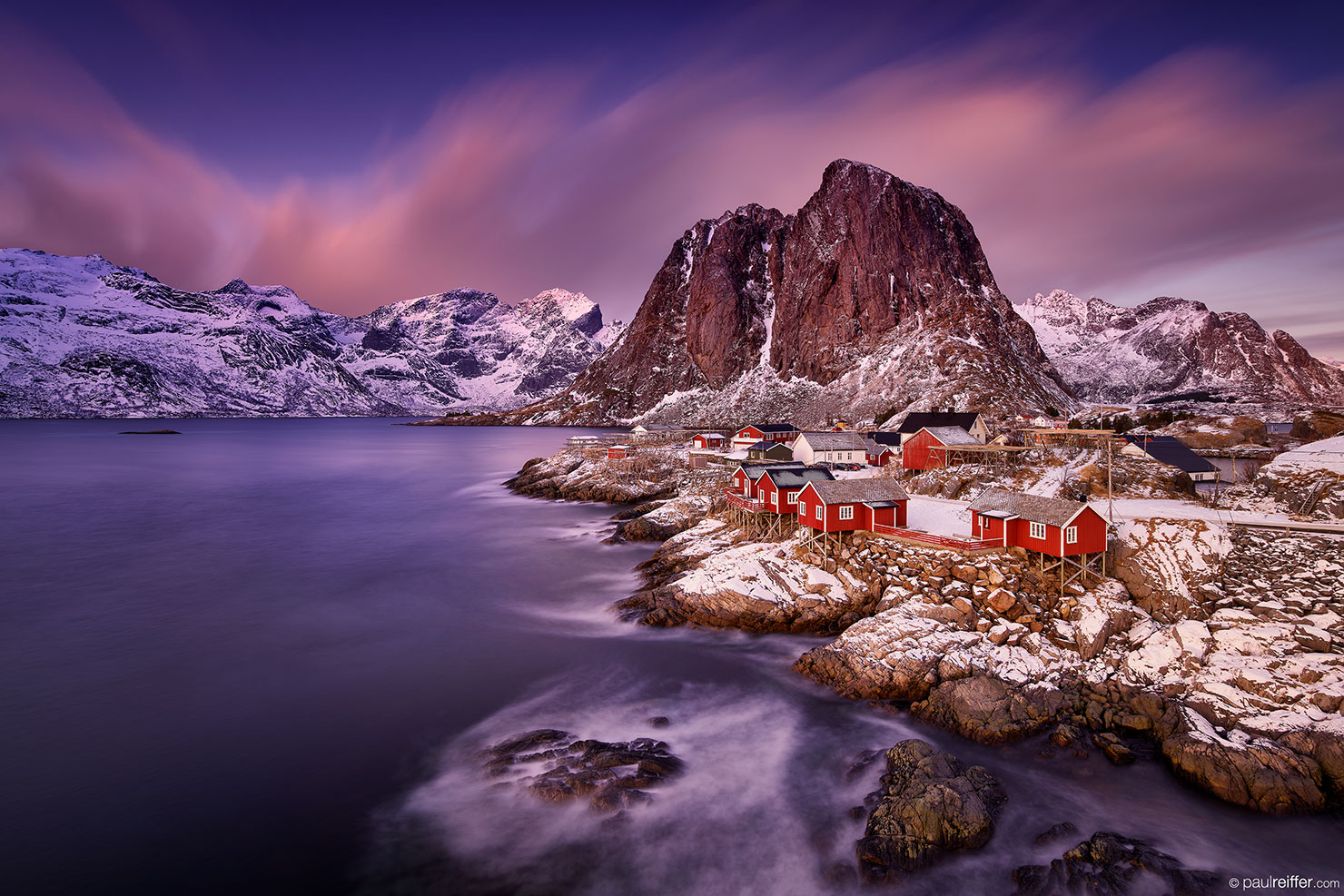 I have to admit, it’s been a place I’d been wanting to shoot for a while, so when the opportunity arose to test some new equipment in low temperatures, it was pretty high up there on my list of possible locations. Sadly, it turns out the cottages are now no more “fisherman’s homes” than room 202 at a Best Western, having been offered out as holiday rentals for many years – but it’s still a fantastic view.

Flying with what is quite possibly (in my view) one of the worst airlines in the world, we landed into Harstad after a quick plane-swap and de-icing in Oslo, to take on the 3.5 hour drive to our base in Leknes. In fairness, I guess SAS’ business class substitute got me prepared for a few hours cramped in a car at least – although the effects of the inflight “Reindeer Rolls” on each of us wasn’t quite so appreciated…

Fast-forward to morning number 1, however, and all was temporarily forgiven. With a “Golden Hour” that lasted for 3 or 4, the sunrises this location kept delivering – even to my iPhone – were second to none. It was definitely time to get out exploring, planning and shooting.

With locations which were surprisingly easy to access, it was quickly apparent the reason why this tiny set of island towns was so popular with photographers – Norway has been welcoming visitors to the Lofoten Islands for decades, and actively promoting the photographic qualities of its stunning scenery. Sadly, that comes at a price, as minivan after minivan arrived into each place like factory tours with way too many people, and not enough space.  There are, of course, ways to avoid this (better knowledge of the area and much smaller, private, group sizes, etc) but it was a warning in my mind of things to come.

Undeterred, we headed up to the “overlook” bridge that links the town of Reine to the rest of the islands; I wanted to get a higher look across the region. The hike up to the mountain on the side didn’t look too inviting when covered in ice and snow, so a quick drone shot was in order – and wow, what a view from up there. 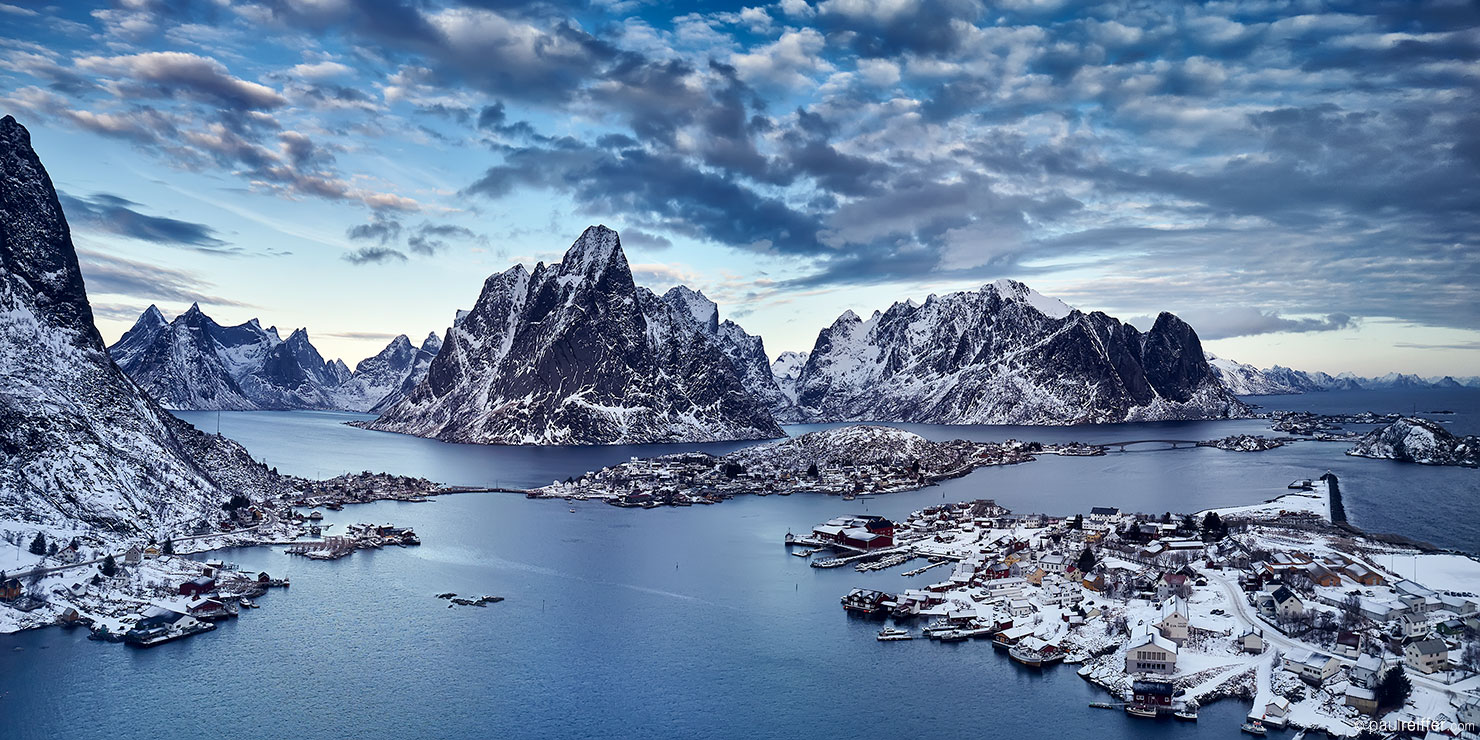 It also made the job of location scouting and understanding the landscape in relation to sunrise/sunset even easier for later in the trip. I could only imagine how genuinely quaint and quiet this little place used to be before it became so popular, a status which I worry they may never regain.

While not my favourite view, this location would at least serve another purpose later on in the evening – having tested the shot at sunrise beforehand, it was actually sunset that won as the foreground was set for a stunning glow behind the mountains at dusk. 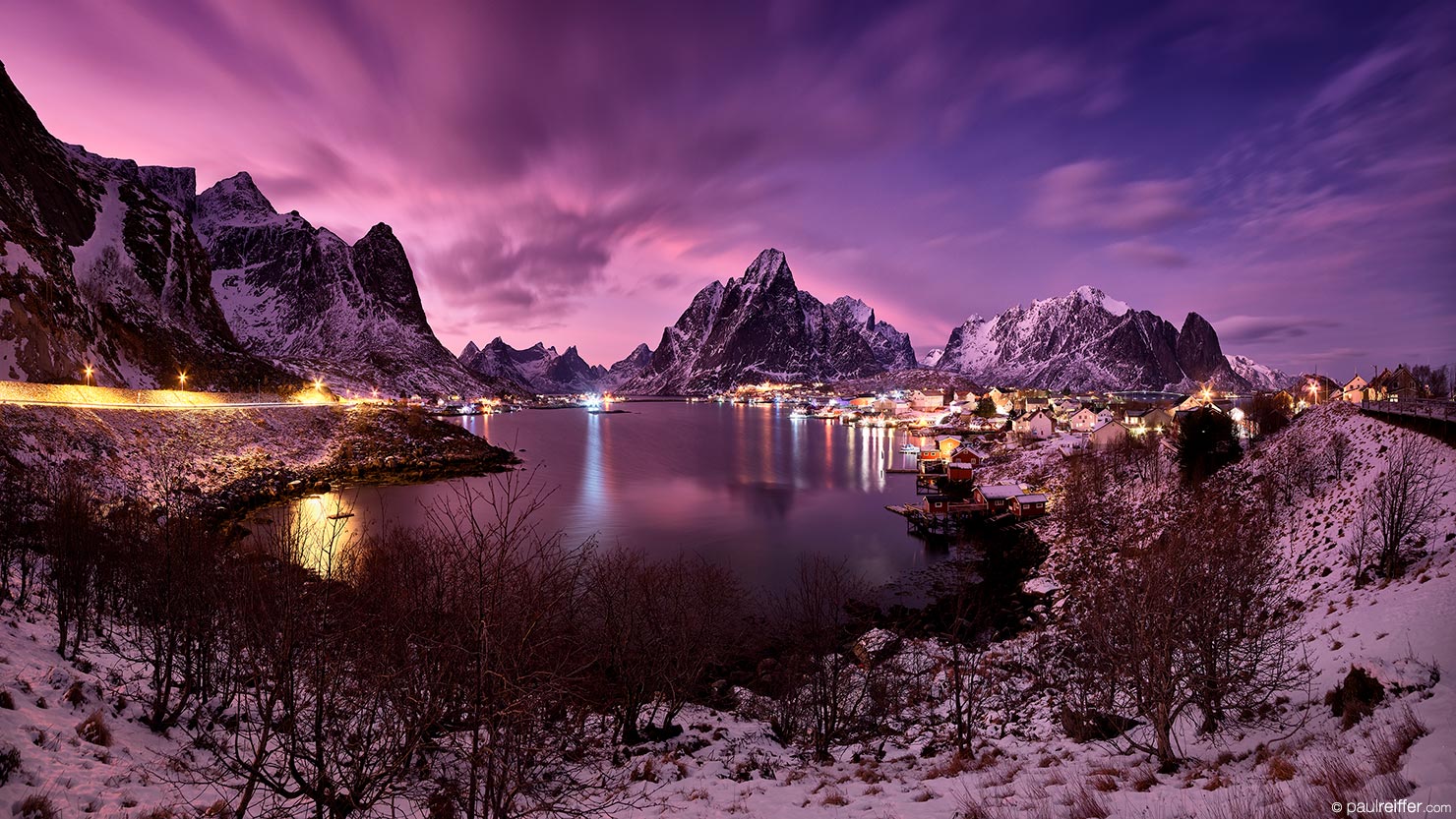 With a week to explore the area and test equipment, it was time to move on to some more challenging locations to shoot. I’d already been putting the spikes on the new tripod to good use while working on the icy ground, but it would be good to try something a little less man-made than a bridge with tripod holes…

…such as the temporary shelf of sea-ice that makes its appearance at low tide near Flakstad, and then disappears shortly after.

Shooting nearly 3 hours after sunrise, that crazy low glow of golden light never made it above the mountain range, instead providing a constant flow of warm light over one of nature’s coldest natural “carpets” that spanned deep into the lake before us. 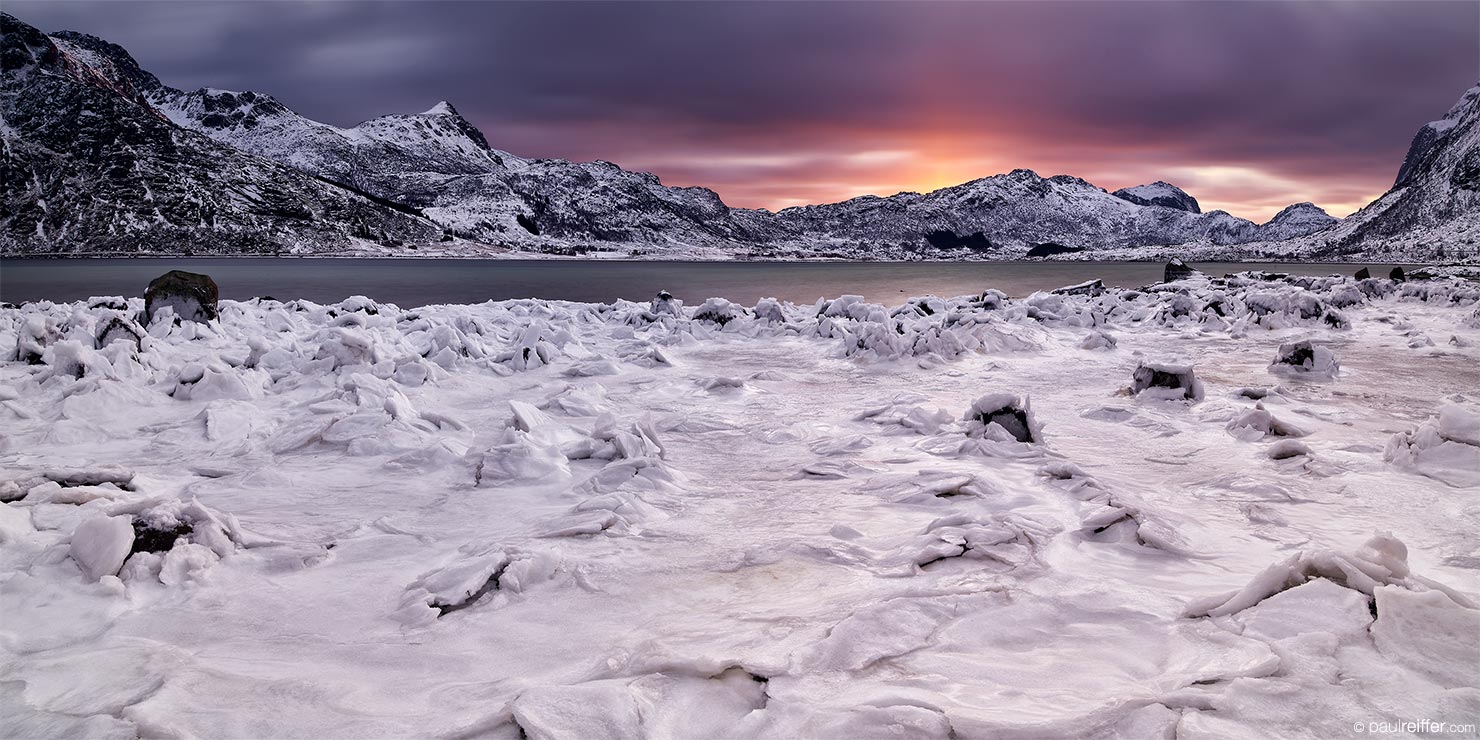 I was also lucky enough to hit a new learning point too: Setting your tripod up to be at its most stable, using the titanium spikes on the feet to dig into the ice below, was a great idea to get the shot – but it appears that sea ice is constantly moving and growing. So much so, that when you want to remove your lovely stable tripod from the “ground” on which you’ve been shooting for a while – it wants to bring half of the ice shelf with it.

Either way, it was worth the hassle – the contrast in the cold sea ice against those tones of orange and red in an otherwise dark, stormy sky, was what I’d been looking for. Even better, returning to the exact same spot only a few hours later revealed how truly temporary this location had been, unless of course I’d been planning to take a very cold bath.

So where next? Well, with far too much fresh mountain air in my lungs, it was about time we hit the beach – via some rotting (they claim “drying” – but I still say rotting!) fish stands on the way of course. Stockfish is one of the oldest preserved food methods in the world, and still to this date allows these remote populations to ensure food supplies remain in place year-round. To be fair, some of the dishes are quite tasty, but wow – it really does stink for miles around…!

Arriving into Flakstad itself, it was clear this was another of the “hotspots” for the groups of larger photographic tours which are now in place across the area. Watching 1 instructor try and shepherd 12 “students” around a single lump of ice, while amusing, was sad to see – there was no way each person was getting the best out of that “experience” and none were able to enjoy the location itself as they were herded from lump to lump on the frozen sand.

However, once clear, and all back in their minibus – I took the opportunity to head further down the beach before the next group inevitably arrived. Just walking the length of the frozen sand was stunning, regardless of photos – imagine leaving no footprints at all, as the sand itself is solid with ice particles holding it together. There was one piece of ice that hadn’t yet been trashed, with a neat little stream running through from the freshwater outlets further up the beach. 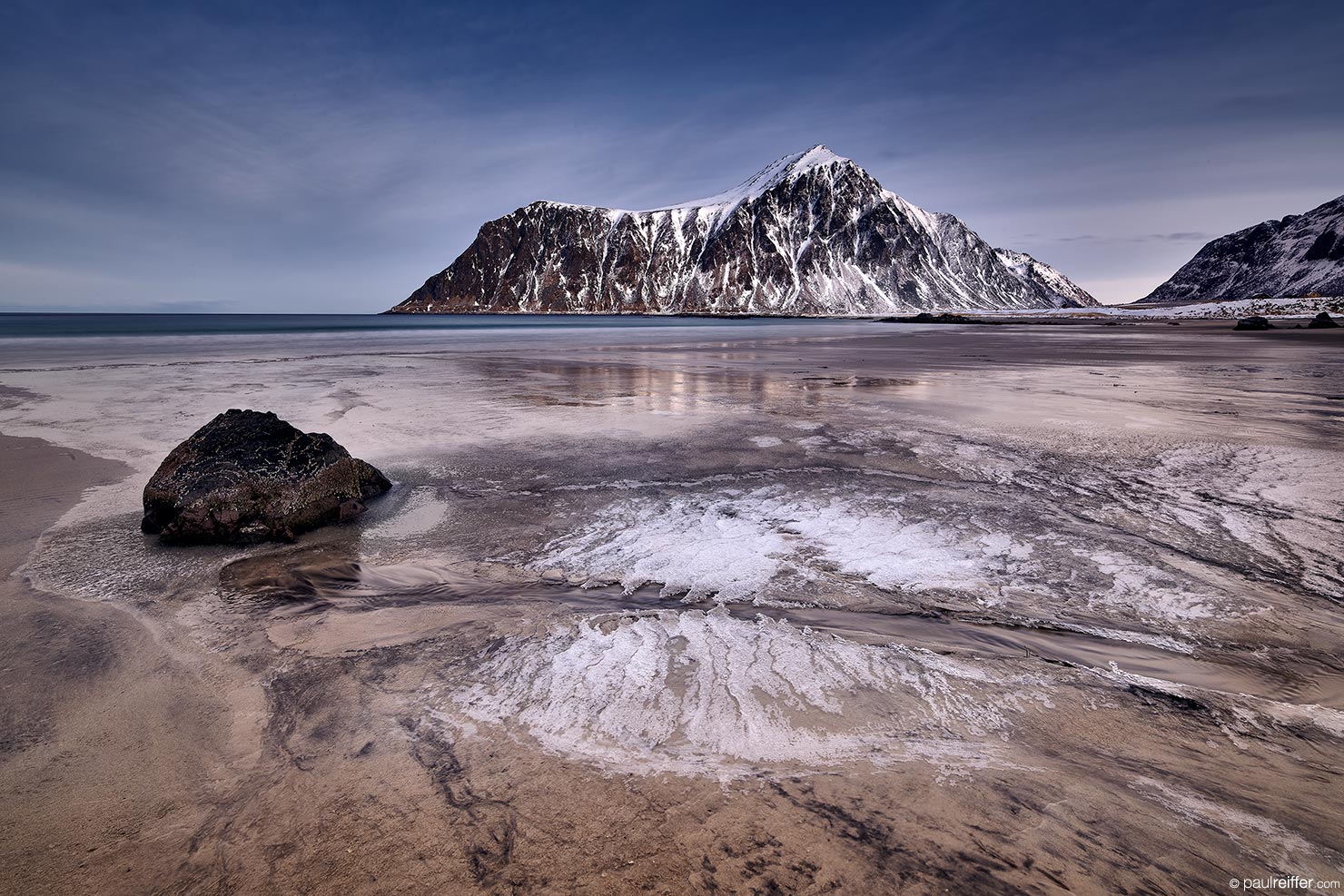 …and as far as locations went, this wouldn’t be a bad one for the Northern Lights, if they decided to make an appearance later on, of course!

I wanted to capture some less-well-used spots too, while we were here. Not just in an effort to avoid the groups, but also to just stop every now and then and look at the place with my eyes instead of constantly through a lens.

Finding another area of the lake where ice had taken hold of the waterfront, I captured the brief moment where the sun finally made it above the range behind us – and even after lunchtime, the warm pink and orange tones still remain throughout the day during the winter in Lofoten.

Then back to the outskirts of Reine itself – to find another view of the red-walled “fishermans cottages”/Airbnb huts. While the fantasy of this little fishing town that was previously in my mind had become a little jaded, the view across the fjords and through these giant mountains on each side was no less stunning than I’d hoped to see when planning the trip. 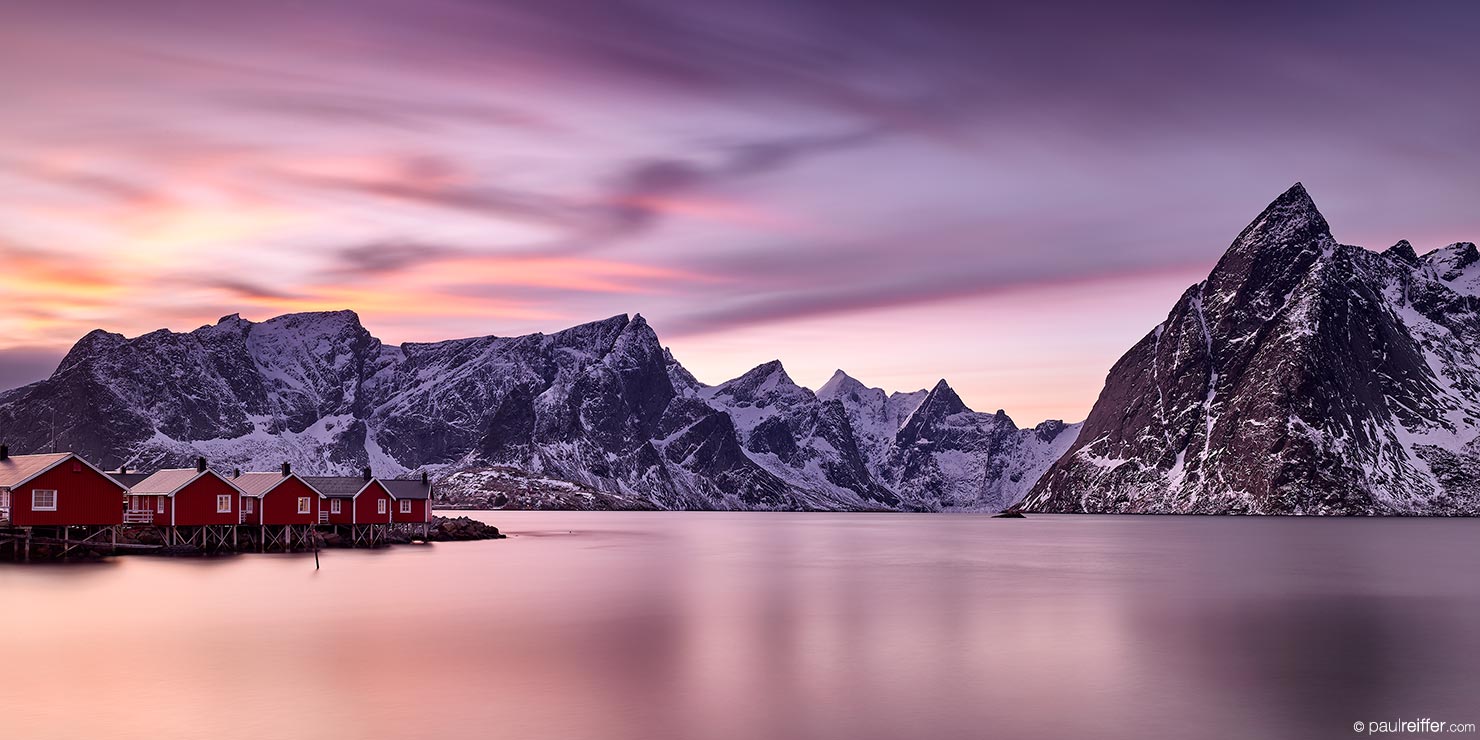 The weather hadn’t quite been perfect all week, but at least the sunset tones had come out to say hi on a few occasions. Further west, there was a spot I’d seen groups heading towards that looked out over Reine itself – but it was the small island before the main town that intrigued me more from this location – half way up the hill, we stopped well before the main area, and it was perfect. 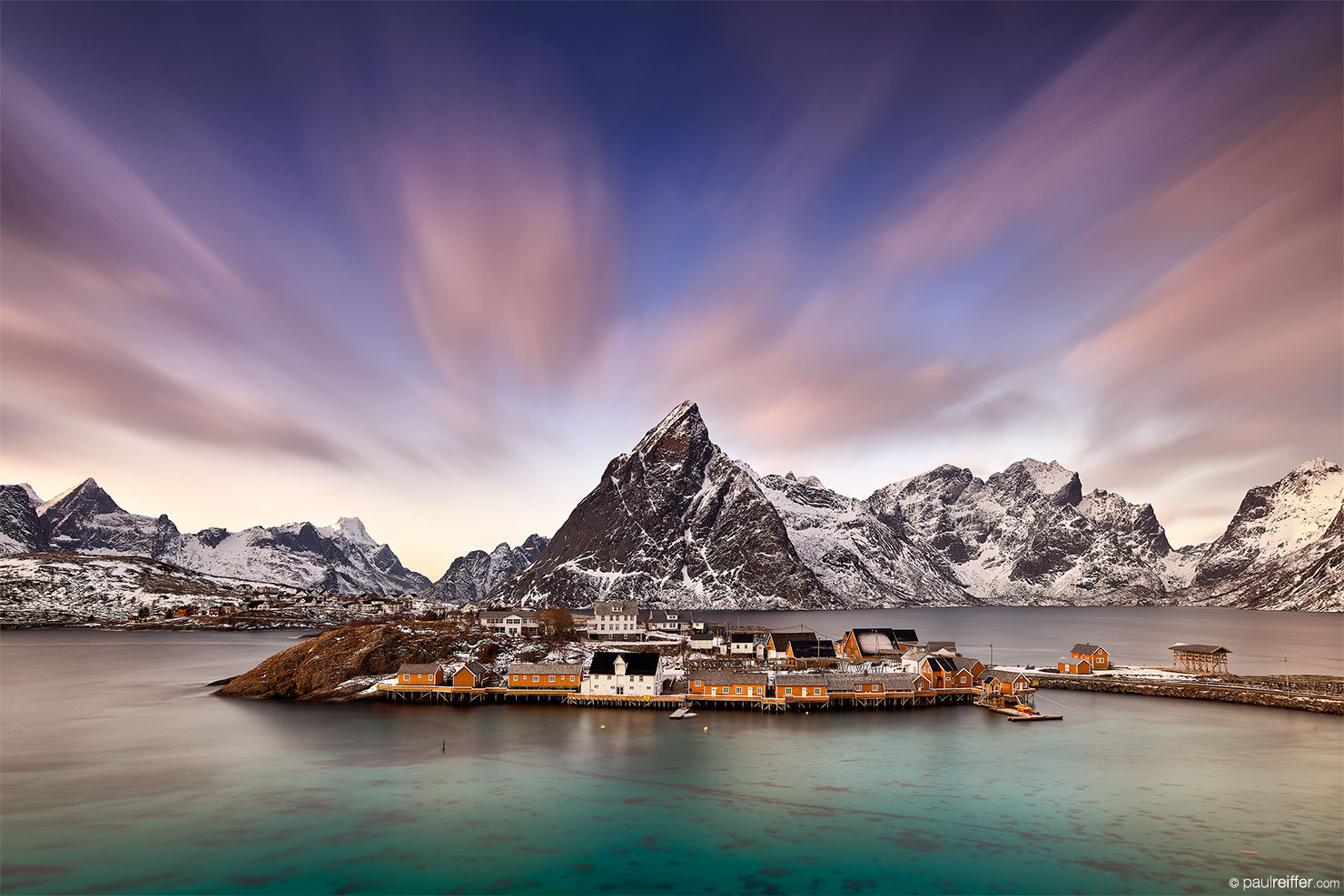 The diffused light had meant the lagoon’s green/blue tone popped out before my eyes – and while there wouldn’t be a dramatic flare as the sun hit cloud across the horizon, the movement above more than made up for it. This tiny little outcrop set out in front of my camera was home to locals, stockfish hanging structures, and even one of the better restaurants in the area.

Heading into the evening light, a tiny church had previously caught my eye in the shadow of the mountain at Vedvika. While it would be a tight call for light, even with the long twilight hours, we rushed across. 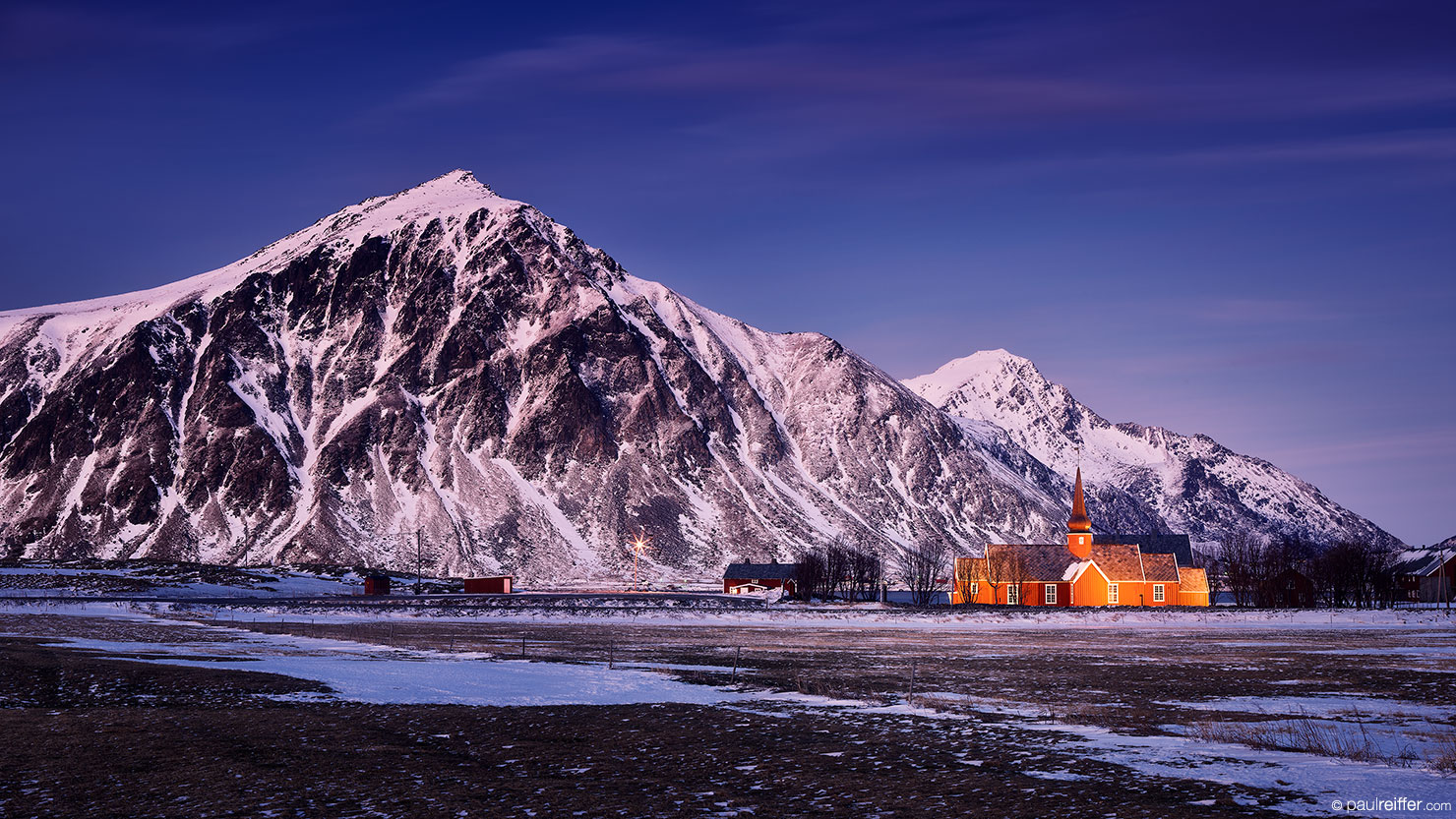 So all the shots I’d planned on “trip 1” were clearly in the bag, and happy with what I’d captured, it was time to hang up the tripod and enjoy the last couple of evenings with a few beers in this wonderful location.

Only, the sky didn’t agree. Or more accurately, the solar winds had another plan.

As we drove back through Reine, there was a glimmer in the sky – it was due to be cloudy, but that was definitely a hint of the aurora borealis. Norway prides itself on being one of the better destinations in the world to capture the Northern Lights, and it would be great to keep my 100% record for photographing them on every trip to the north. Could we get to a location in time? 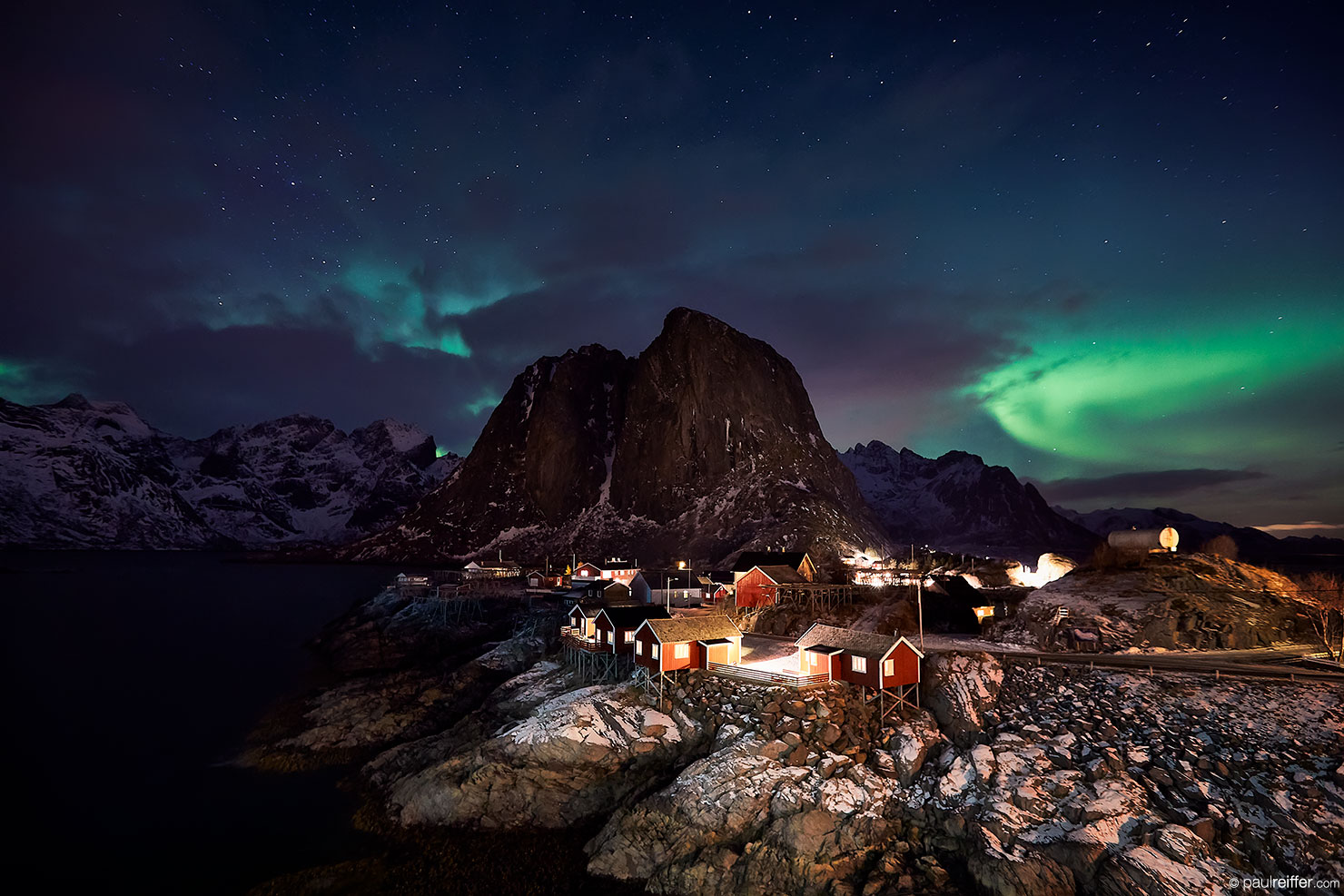 It turns out, yes we could.

Although still cloudy – that’s part of what makes up the charm of the Lofoten Islands; the weather that dances between the mountains. Coupled with the northern lights in the background, this was a hit – but there was a chance to get something even better if we could just head away from that cloud. 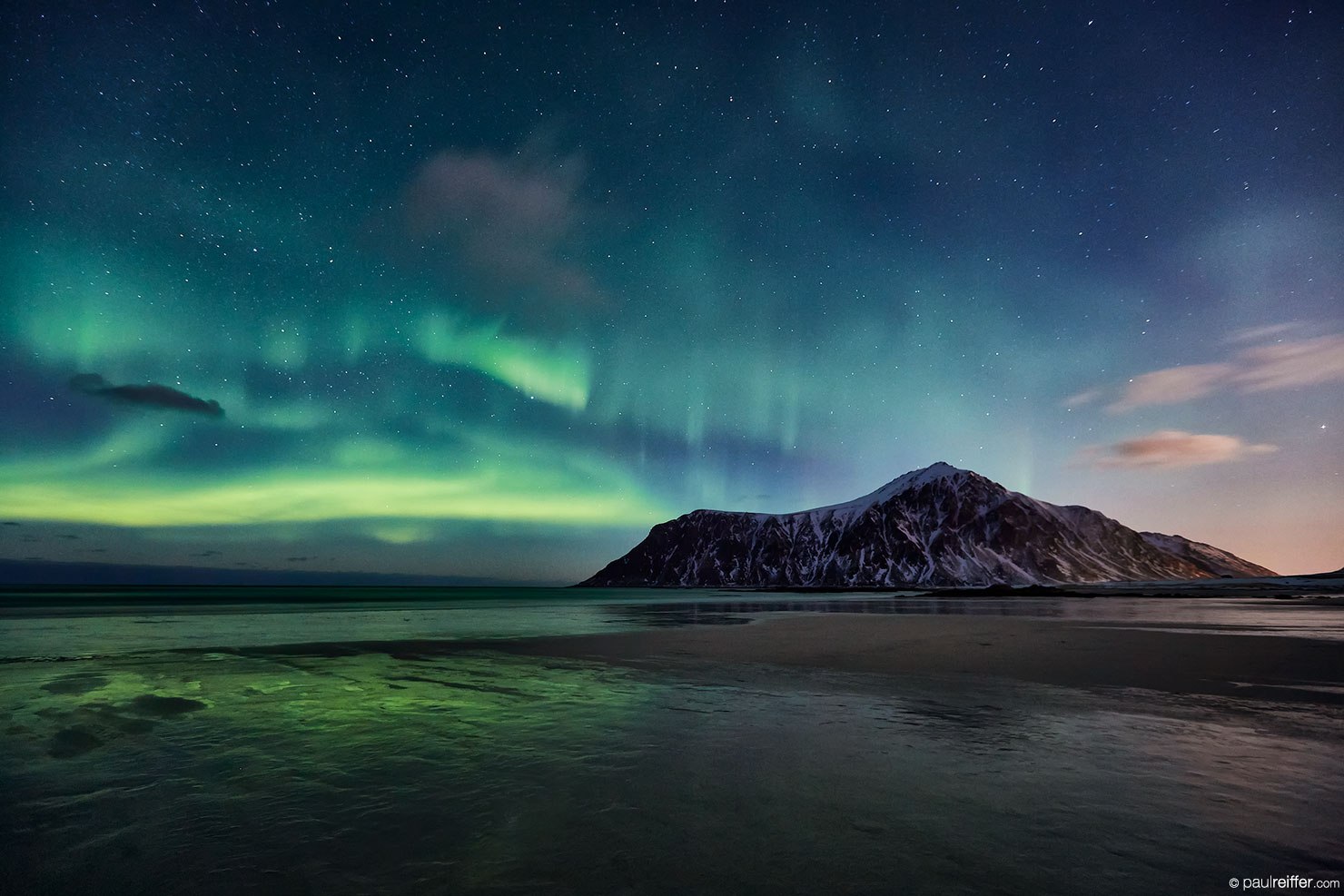 I did. The frozen surface of the sand created the perfect reflection to the sky – and the dancing lights above continued for another 20 minutes. As always, we often forget to put our cameras down when shooting something amazing, but it’s important to enjoy the show in the sky with your own eyes too, not just your sensor and lens.

On a scale of “success”, while the weather hadn’t always been perfect, the Lofoten Islands really did tick the location boxes I was looking for, and Norway remains a fantastic country to explore. Granted, being stranded by SAS on the way home didn’t leave the best taste in our mouths, but that was soon eclipsed by the threat of another dry Reindeer Roll on the final leg home.

And in other news, what else did I learn?

Rollei Lion Rock 30 Mk II Review - Could this be the most stable tripod, ever?