Ah, Yosemite – a “photographer’s paradise” (as claimed), but a location which can equally be the stuff of a photographer’s nightmares…

On what must now be my 7th or 8th time of visiting, I was determined on this occasion to get at least one shot which stood out from the millions of picture-postcard views and Ansel Adams “tributes” that I see far too often. In one single frame, almost by accident, I managed it – with my latest release: “The Faraway Tree”: 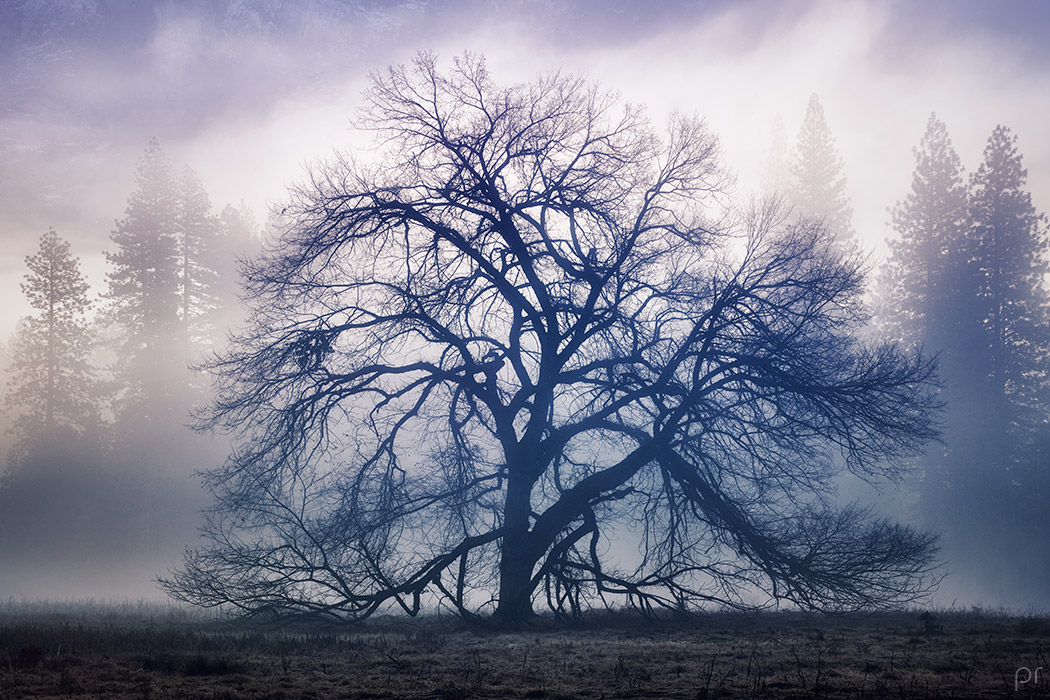 “The Faraway Tree” – available to buy as a limited edition print

Ironically, just moments before this capture was on my memory card, I’d resigned myself to yet another “OK” trip to Yosemite National Park. OK, in the sense that I’d got a few nice sunrises – and had even been lucky with the fog that morning – but the weather wasn’t exactly what I’d hoped for in winter, and many of the scenes around just didn’t quite have that “wow” factor.

The day before, we’d been stood at the infamous “Tunnel View”, along with the usual group of early risers, to capture what would hopefully be a more interesting sunrise than the last time I’d been stood in the same spot. With the sun being further South at this time of year, I was hoping for reds, pinks, oranges through the valley as the light slowly brightened across the sky.

And to be fair, that’s exactly what I got. No, there was no snow in the foreground like I’d been hoping for, but the falls were running strong with the early snowfall melting into the feeds – and ultimately, I was happy with the first shot of our 3-night stay in the park: 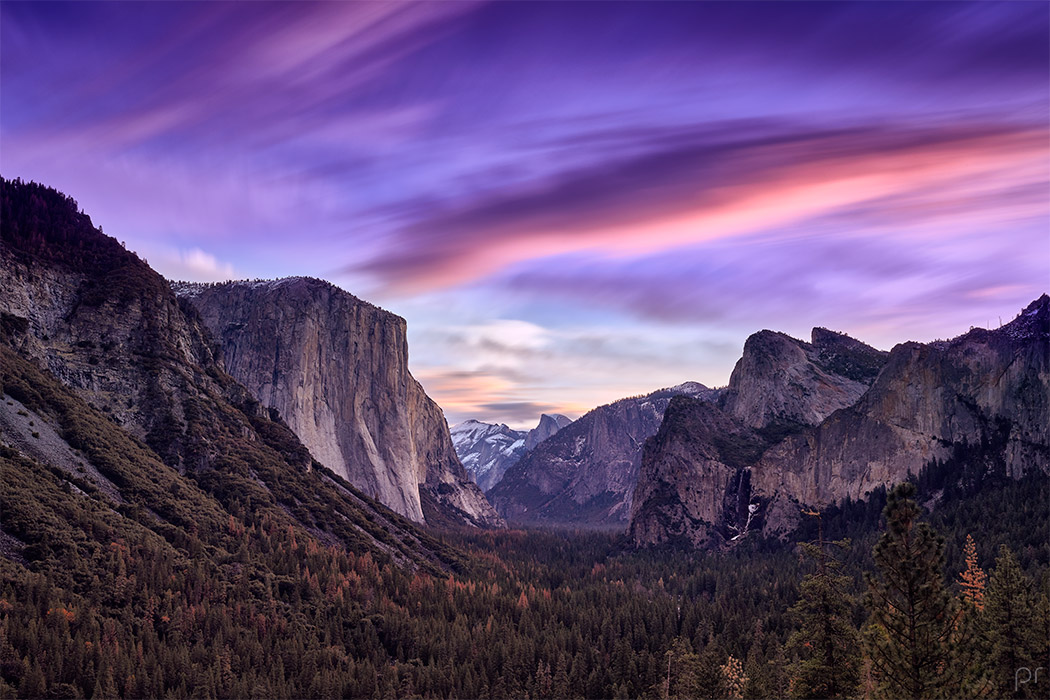 But it wasn’t enough. You see, that’s the “picture postcard” style view I’ve seen too often. I wanted atmosphere, mood (and preferably snow!). It can be a real knife-edge move when it snows: Too much, and you can’t get in or out of the park. Too little, and you hardly notice it.

While storms had been forecast for two of the days we had there, it never quite managed to provide the flurries of white stuff we’d been hoping for. Still, there was one other option with this type of weather and likely temperature… Morning fog.

Driving through the black of pre-dawn along the valley floor in thick mist, the next morning looked hopeful. As I popped out of the layer of cloud around 500m from Tunnel View, my expectations were even further raised – could this finally be a time where the fog sat tight on the valley floor? Well, another 6 or 7 photographers seemed to think so, so time to set up.

While thick at first, as you can see in the above images, the layers slowly lowered and then delivered some crazy shapes as the rotors in the air began “whipping up” the fog below into almost surf-like waves. Waiting just a few seconds for Half Dome in the distance to finally clear its own cloud formation, it was time to click – and with 30 second exposures (plus 30 second dark curtain), the race was on to capture the light falling on El Capitan and all the fog below before the sun itself popped out in all its strength. 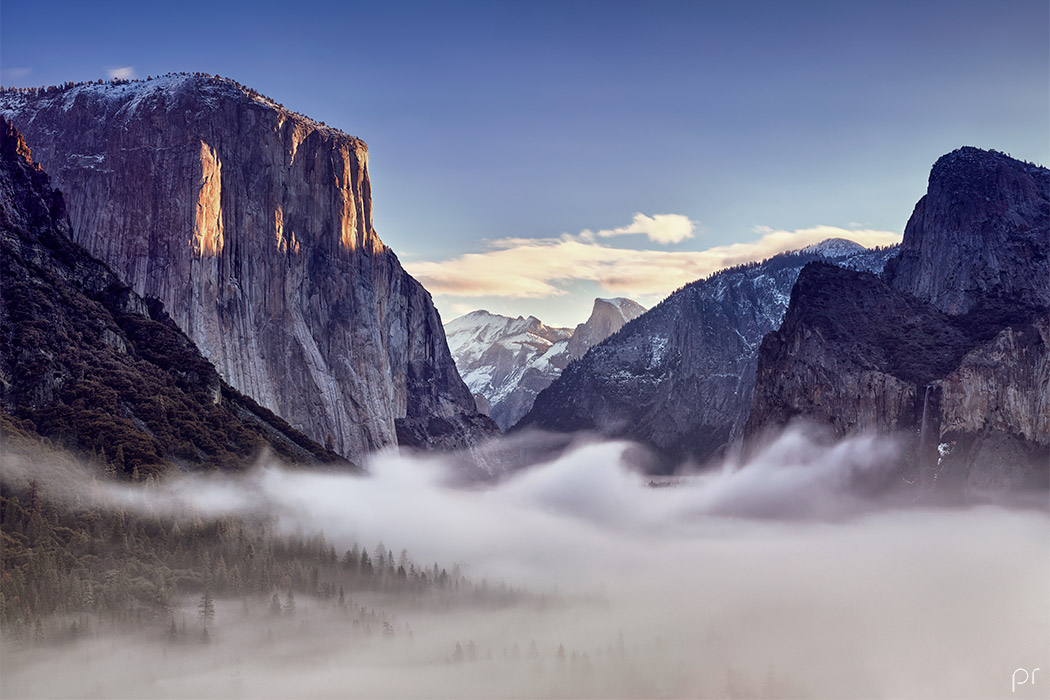 And, (while I’m obviously biased!) I really do love this shot – the texture in the forests down below; trees swamped in the morning mist; the sunlight falling on the face of El Capitan in the foreground, the imposing shape of Half Dome capped in snow off in the distance; the cascading water of Bridalveil Falls to the right of the frame, with fresh snow-melt falling straight down and forming ice as it passed over the cold rock. This one single frame captured the entire feeling I had while stood up there watching all this occur below.

So, how did the faraway tree come about? Well, ironically, on the way back down to our hotel….!

It’s that age-old saying: “Always remember that at any point in time, at least half of the world is behind you”. Looking in the rear-view mirror on the way back to Yosemite Lodge, where the sun had finally started to break through to the valley floor, an otherwise “normal” tree had become the star of the show as it bathed in the fog and light that surrounded its bare branches. Bearing in mind it’s a one-way system, this was a quick decision to make: Park!

Hopping out, I noticed I wasn’t the only one there – but while others were concentrating on the wider scene (including the random giant snowball in the foreground), I really wanted something a lot more intimate and direct. The tree itself was perfect, but the temptation to shoot Half Dome in the frame at the same time was too strong; I shot both options. Looking back through the images later on, I really didn’t need to cover my bases, the close-ups were exactly what I was looking for – a “portrait” of Yosemite’s charm in winter.

With only one sunset left in the park, it was time to revisit a small area that is so close to one of the parking lots, I can’t believe people don’t know about it. While thousands every year trek to “Mirror Lake” to get their reflective shot of Half Dome, in reality it has three problems:

Well here’s the alternative – and, as I’m sure you’ll agree, this part of the river is just as much of a spectacular mirror (with another round of mist thrown in for good measure!) as its namesake sibling. 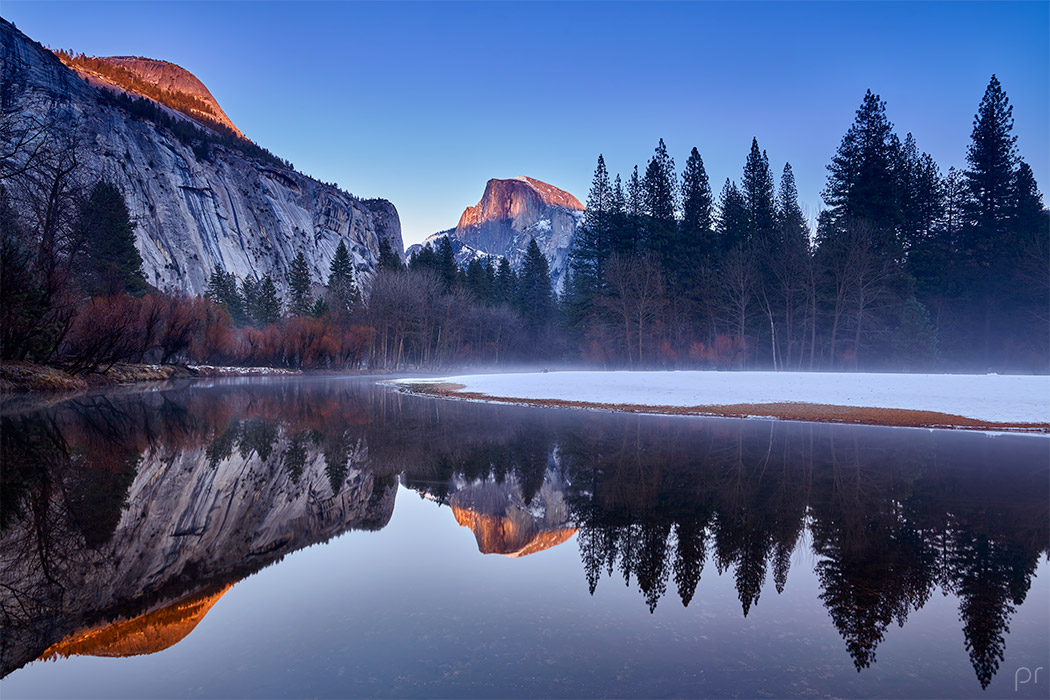 So there we have it. Four very different shots of Yosemite – none of which had I actually planned to capture when we first arrived. From “disaster” through lack of active snowfall, via excitement at the fog arriving, through to elation at a tree, the fog and the sun all falling into line at the perfect time. These four shots made it “worth it” and took me from a place where Yosemite was starting to get frustrating, to a place that I look forward to visiting once again.

For those who’ve never been, make sure you add this remarkable place to your itinerary if ever you head to California. For those who have before, maybe give it a few tries in different seasons – you might be surprised how different the entire valley can be throughout the year. 🙂

And finally, on to Reiffer’s top tips… 😉

Handwarmers: The single most frustrating little pouch of carbon in the world. When you first “activate” them, they’re not hot enough – an hour after you need them, they’re at a temperature that could melt the moon. But they last for 6-8 hours, and it seems such a waste to just leave them to go cold…

Windscreens: Infuriating when you get up at 4:00am, walking to a rental car with no de-icer, to have to sit there for 20 minutes with the engine running to remove the ice that’s formed on the windscreen in winter. If only there was something that could keep the air under the glass just a few degrees warmer during the coldest part of the night (2am-4am)…

So, next time you’re shooting at night/sunset and you activate a pair of hand warmers, don’t throw them away when you’re done. As you park your car for the evening, just place them on the dashboard and leave them there to keep the heat up in the car. It won’t boil the car, and (trust me) the cabin isn’t going to be toasty warm when you get in 8 hours later(!) but it will, 100%, keep the frost and ice from the base of the glass, enough to get on your way quickly the next morning while all the cars around you are frozen over.

Well, it saved me a chunk of time, anyway… 😉