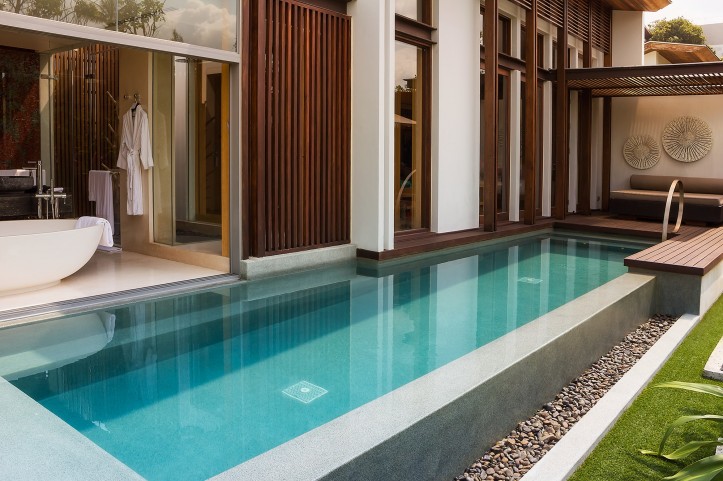 The above picture is of my hotel “room” from last week in Koh Samui at the “W Retreat” in Mae Nam. What’s a hotel room doing on Paul’s blog? I hear you ask – Well, there’s a bit of a back-story to this one and the place is stunning enough to warrant me actually putting fingers to keys and writing about it (yes, it’s that good). And for once, I’m posting an entire page of images taken on my iPhone – NOT any of my “pro” cameras. So, bearing all that in mind, yes, this place really is amazing… 😉

We spend a bit of time in Thailand now – in part as an escape from the Shanghai air and in part because it’s one of my favourite places in the world. As a regular visitor (and fan) of W Hotels around the world, about 6 months ago, we headed to the W Retreat to eat at Namu – their boutique asian restaurant and to have a look around. Our experience was fantastic, and on returning from Koh Samui (based on that experience alone) I booked our next stay at the Hansar for half of our next trip (another amazing hotel) and then the W Retreat for the other. The retreat is built on a hilltop on the north coast of Samui, and to put some perspective into place, THIS is the “lobby” bar below : Sunken pods over an infinity pool, looking out over Koh Phangan. And this is the ENTRANCE 🙂

Now, to be fair, we got off to a bit of a rocky start at the hotel (and I won’t go into details, but our “retreat” didn’t start with a perfect setup as those of you on twitter will know), but honestly, how this place performed after that makes this probably my new favourite hotel in the world….

Let’s start with the rooms. That picture at the top of this post is not unusual : EVERY single room in this place has its own private pool. With a choice of a view over Koh Phangan, a villa that’s actually on the beach, or (in my case) a secluded “oasis” which is as private as it can be. Our room was nearly 250sqm with a swim-up bathroom and huge living area. The entire resort relies on an extremely efficient network of golf buggies to transport people around between their villa, the beach, the spa, restaurants and anywhere else – during these rides, you will get to know some amazing characters such as “Oak” our driver in this picture 🙂

Back to the lobby/”Woo Bar”/entrance you saw above. At night it becomes the center of attention as the DJ concocts a mix of chill-out beats and pick-me-up music to head on into the tropical evening from behind his very own “floating head”, surrounded by orbs of light which change colour with the mood…

Samui can be a hot place – and the guys at the W have that sorted : at every single cluster of villas, you’ll find a “sweet spot” which is stocked, 24/7, with ice creams, drinks and snacks. I know it’s not free – you’re clearly paying for it in the price of the room, but seriously – you realise pretty quickly in this place that they’ve designed the entire retreat as a playground for adults 🙂

Then comes something that has literally changed my entire plans for where I want to live in future : the outside “rain shower” that features in every room. Picture this – you wake up to a newspaper left at your door in the sunshine. You then walk into your own private (in the bathroom) outdoor rain shower, to freshen up while being basked in tropical sunshine – it’s amazing – I NEED one of these…!

The hotel is full of little quirks that make it funky enough to be different, but still top-end (and therefore able to justify its pricing). It’s not cheap to stay here, but WOW they look after their guests. Nick, the General Manager at the hotel is an absolute star – one of the best guys in the hospitality industry by a looooong way. Along with Jean (the Ops Director), Robert (the hardest working F&B Manager I’ve ever met) and their teams, this hotel is different from the others for one reason more than any : the team just works. Every single person working here has one thing and one thing only on their mind : “how can we make today special for our guests?” – and that, they achieve.

We had a special occasion while at the hotel – and special, they made it. I know the hotel is a fan of lighting (as am I!) but they took it to the extreme for our “in-villa-dining” they prepared for us.  Yes, our very own “orbs” were delivered while we were out to complete the look when we came back for a surprise meal prepared specifically for us, full of absolutely amazing food.

To some, I’m sure this hotel is seen as “over the top”. I heard comments from others about it not being “kid friendly” – well, you know what? No – it’s not. I think kids are great, but sometimes it’s nice to escape from them and have a peaceful retreat in a tiny slice of your own paradise; the clue is in the name : The W Retreat. The decor, while I’m certain isn’t to everyone’s taste, is really well thought through and the whole place just fits together perfectly. Every detail from the welcome drink, to the chill-out area at the Sip beach bar, to the weird poodle-things behind the main bar have been thought through to ensure it all hangs together, and the guys here have done a really good job of creating an escape-destination that really works.

No, it’s not for everyone, but I have to say – this place really is “me”. Overlaying the amazing team that Nick has with him at the hotel, the retreat is pretty much flawless in my view (after my initial hiccup!). It’s not a cheap place to stay (prices start from £400/night for the basic units, advance purchase) but we spent 5 days here wanting for nothing. I can’t speak highly enough of Nick and his team there. Coming for a break from Shanghai where it takes 10 “workers” to fit a lightbulb, these guys were amazing. This is a General Manager who doesn’t just order people to fix stuff – he himself gets out in the rain to move peoples drinks in from the bar and covers their seats. An Ops Director who will gladly run (literally) to the other end of the resort to make sure something is set up just perfectly for your return, and a Food & Beverage manager who will find a way of making things possible even if on paper they’re not. Until I own my own private island, this will more than make do for me – that’s for certain 😉

I actually said to Nick when we left (with massive “send off”) to the airport that this was the first “hotel” which has caused me to feel a real heavy-heart at the prospect of leaving. Not just for the place, but the people – they’re a special bunch here, and should be proud of what they have.

A few “top tips” for anyone thinking of staying at the W Retreat Koh Samui: