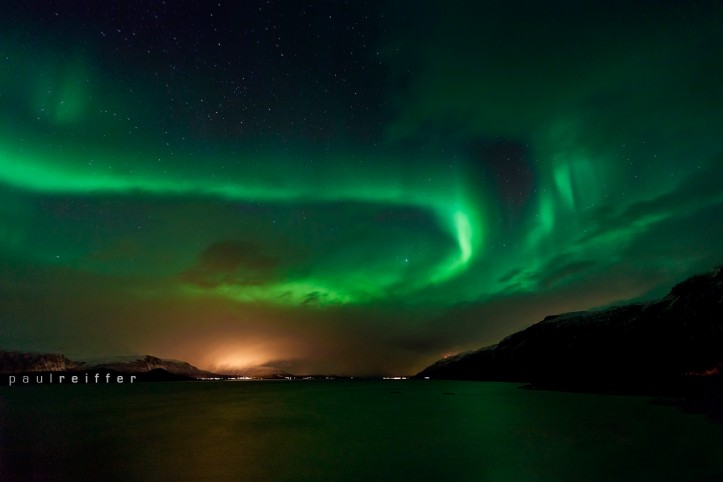 This is a photograph I never thought I’d get – not only because I hadn’t planned a trip to Norway (the Northern Lights / Aurora Borealis had never been something I thought I would see for myself) – but also on the first dark Friday night there, having spent 4 hours freezing by the side of a lake, they showed absolutely no sign of appearing!

That’s right – less than 30 minutes after getting to Tromsø, a tiny little island in the far north of Norway, we were in our warm snow-gear and heading out with Vidar, a photographer from the area, to try and capture the Aurora on our first night in the country. 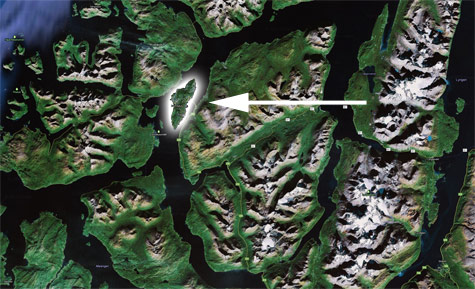 Naively, I had always thought that it was a simple task to see the Aurora – surely you just “look up at night”?! Well, no. It turns out you need a few things to fall into place in order to see them: A solar “burp” 18 hours before (it takes that long to reach the earth), a great location as a backdrop, a view of the sky to the north, and most importantly, a clear sky!

Luckily there are a few tools to help predict/plan a trip out to see the aurora, including an excellent site – “Tromsø Live” with webcams, magnetometer readings and geomagnetic trends – all provided to help “Aurora Chasers” make informed decisions.

So here’s the magnetometer chart for the night of the 10th February – the night we landed. And it turns out there was quite a bit of activity between 8pm and midnight (it actually continued until 3am the next morning). So why were we so disappointed, cold and miserable? Well, because it seems there is quite often something which comes between us humans and the Aurora…

Yes, that’s right – this is the only shot of the Northern Lights I got throughout the entire night: 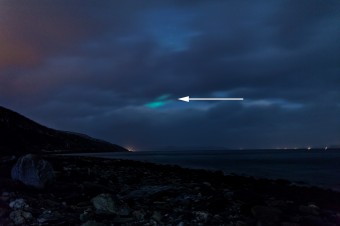 There were 7 of us in total on the beach, and nobody got more than this glimpse of the Aurora. As a slight positive, at least, at least I got to play with both my Canon 16-35mm f/2.8 L II and Canon 24mm f/1.4 L II lenses in really low light and learn how to change my camera settings in the freezing cold, so I was ready for when the show did appear!

Beyond that, we met some fantastic people and had a great time on the journey at least – however, according to the satellite imagery and weather forecast, the thick cloud was due to stay put. That was the night written off.

We returned, rather depressed, having seen nothing and seriously worried if 3 days was enough to be able to even get a good glimpse of the lights, let alone get “the shot” I’d planned in my mind before we got to Norway.

So this is where our secret weapon – Marcus – came into action…

Marcus specialises in chasing the lights – it’s what he does. Not photography, not tour guiding, he just chases the lights. He knows the weather, the area, the locations and views and the next night we spent nearly 8 hours chasing all over the north of the country (at one point nearly hitting the border with Finland!) with the sole aim of getting us to see the Aurora. After one quick stop about an hour previously, when he thought it was starting (a false start!) we were starting to get that sinking feeling again as we drove through cloud for miles and miles. Then, out of the blue, the van suddenly screeched to a halt and Marcus told us to get out quickly. There it was – the Aurora Borealis was dancing all over the sky right above the road we were on in a clearing through the cloud! 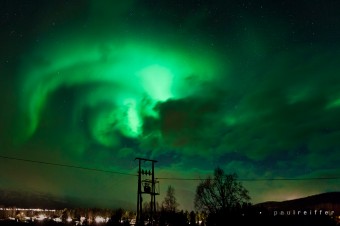 Compared to the results of the previous evening, we were ecstatic already. Yes, there were still clouds in the sky and it wasn’t exactly the most idyllic location – but we’d seen them! Now here’s one thing to bear in mind : these photos are between 6 and 10 seconds in exposure, at f1.6-f2.8 and an ISO of 1250-1600. That’s a LOT of sensitivity I’m using from the camera, and this isn’t what your eyes actually see. Yes, you can see the lights (and yes, they move – or “dance” across the sky as part of the show) but if you’re expecting to see a show that’s quite this vivid, I’m afraid you may be disappointed.

That said, it is an incredible experience. The sky literally comes alive – with the magnetic solar storm changing the view above our heads every single second. Not wanting to leave it at this, however, Marcus quickly ushered us back into the van and we were quickly on our way towards Lyngen, east of Tromsø and a view of Pollfjellet mountain across one of the lakes. And what a treat we were given – a show that lasted around 30 minutes, right above the mountain (including the first image in this post). 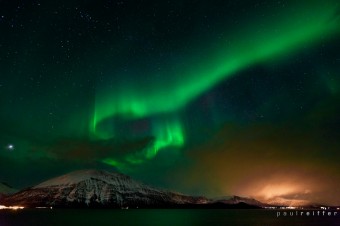 The mix of streams, “waterfalls” and twists and turns from above was absolutely amazing to see. Granted, the camera can make the show more vivid than in reality, but let’s not forget – these are captures of what was really up there. None of these images have been “filtered”, other than some noise reduction (for the high ISO I was using), and the show really did leave everybody breathless.

So there was our proof – it was possible to see the lights, even when Tromsø itself is souped-in with cloud and snow. After another 2am return to the hotel, just one more thing to do before going to bed : hire a car for our last night – we were going to give it a go ourselves 🙂

I found the perfect spot on Google Earth, a lake with mountains on both sides – looking directly north and out of the light pollution of the city – and that’s where we headed at 6:30pm to get into position. It was then that the lessons of the day before came to bite – the snow started falling. Heavily. Really heavily. After a 20 minute wait in position, it was clearly getting no better – so it was into “Marcus mode” we went and time to chase the lights (and the clear sky!).

We’d learnt from the previous evening that if the coast is no good, heading East seems to work. At least Norway has a ton of mountains and lakes, so there’s never really a problem getting a decent backdrop – although after over 1.5 hours of driving we’d still not seen even a flicker of light. Clearings came and went, cloud disappeared, mountains passed by but still nothing. Then randomly, just looking out of the window, I caught a glimpse of something that looked a little more illuminated than the rest of the clouds up there. We stopped in a driveway of a small house and got out to see…

…a show directly over the mountains! We’d done it – all on our own, we’d found the lights 🙂  I started snapping. 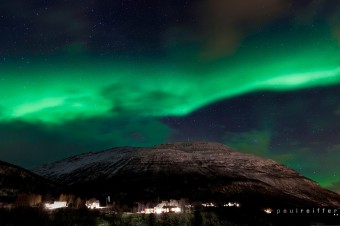 Although not quite as “dramatic” as the previous night’s show, I have to say these are the shots I’m most proud of. We’d driven for nearly 2 hours into the mountains and almost given up (kind of hoping to bump into Marcus through some freak lucky miracle!) but then it happened for us just in time 🙂

After that, we tried pushing our luck a little further by heading back north-west to the location we’d found to begin with. Guess what? We’d absolutely made the right decision – the snow had gotten worse, and nothing was happening in the sky over that area. While sad for those people who had wanted to see it there, the sense of satisfaction that we’d not only chased the lights but found them all by ourselves actually made the whole evening worth it.

What did I learn? Well – the Northern Lights are by no means a guaranteed show – we heard so many people at the airport with sad tales of having been there for 4-5 days and not seen them once. But it turns out, if you’re willing and able to chase after them (and it’s a LONG night!) you can find something quite genuinely spectacular – something that only nature could provide. No, they’re not quite the vivid, saturated, colourful show that photographs portray (mostly due to the fact that our eyes don’t work on a 10 second exposure time!) but it is an amazing sight to behold.

Oh, and one more thing. Don’t look back. We left on the 13th, having been out looking for them on the previous three nights – it just so happens that following our departure Tromsø experienced one of the most extreme levels of geomagnetic and solar activity it had seen in a long while. On the one hand, the grass is always greener; on the other, I guess it gives me a reason to go back sometime too…!

Hope you like the images, anyway, and a MASSIVE thanks to Vic – what an amazing Christmas present, one I’ll not forget 🙂

Can technology make a model? - Photoshop vs reality : who wins?