Having taken almost an entire day getting from the (stunning) luxury of the Hansar resort in Koh Samui, we arrived at Laem Tong in Phi Phi pretty late in the evening.  While it was a chore getting there (involving a car to the airport, flight, car from airport, ferry, long tail boat transfer) it wasn’t Phi Phi Don I was here to see – it was the smaller sibling, Phi Phi Leh which we the target for photography the next day.  This is where Maya Beach is located – the set of the 2000 blockbuster “The Beach”, and I wanted to head there to see what I could capture as well as put my little “travel camera” – the S95 through its paces.
The hotel offered us a “tour” of 4 hours in a long tail boat, but given what I’d heard of the tourist situation (from around 8am, you can’t actually *see* the bay for the number of boats in it, all trying to get their glimpse of paradise), I chose to have a chat with one of the “Sea Gypsies” next door, who offered me a boat and two “crew” for the morning, on my terms rather than a guided tour.

Being at the northernmost tip of Phi Phi Don, I’d not recommend this location for anyone wanting to visit Phi Phi Le; it was a 45 minute trip just to *get* to the waters of the other island from up here, and I still wanted to beat the other tourist boats.  “See you at 6:30 then!” was our parting joke – ouch, yes, it hurt to be up in time for this trip.  In fairness though, 6:30am and there were “Tun” and his little helper “Keiko” fuelling up and getting the boat ready for our trip…
As you’ll see from those images, between fuelling and setting off, the weather changed quite dramatically – and by the time we passed others along the coast, it was clear a storm was coming in.  Not great for a once in a lifetime chance to shoot Maya, but it did at least give me a chance to test the S95’s exposure handling in difficult light…! 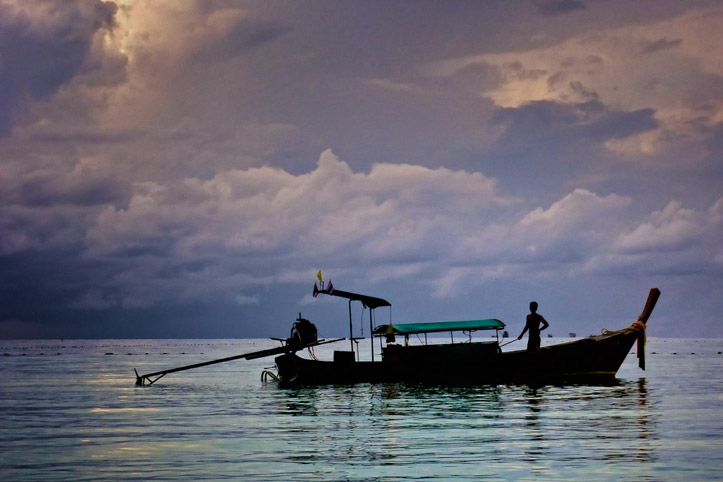 So, almost an hour later and Phi Phi Leh was next to us – it’s an island made of sheer limestone, worn away at the bottom (at a rate of 1m per 5,000 years) presenting some unique landscapes.  More worrying, however, is that from the west (where we’d come from) the sea was calm and no problem.  The second we got out into open water to the east of the island, however (where the entrance to Maya Bay is located), WOW – those long tail boats suddenly feel very small, and this wasn’t even a big swell!

“The Beach” (Maya Bay) is actually hidden behind two huge limestone “doors” which tower above you, hundreds of feet into the sky – it’s these which give it the unique look which is so recognisable from the film, but also shows how much protection it needs from the battering of the sea which is just outside.

Still, we made it into Maya.  And yes, the place is STUNNING.  I can see why they chose it for the film in a heartbeat – and can only imagine how perfect it WAS before it became so famous.  Sadly, the weather wasn’t being very kind to us, so we decided to walk to the other side of the island through a cutout to Sama Bay to take a look, and then go for a swim, all the time waiting for the weather to improve just slightly.  It has to be said, even with the cloudy sky, the sea was a bright opal colour – but when that sky brightened up, the entire place came alive – and luckily for us it did, quickly, as within minutes of taking this photograph, there were 8 long tail boats and 2 tourist ferries in the bay! 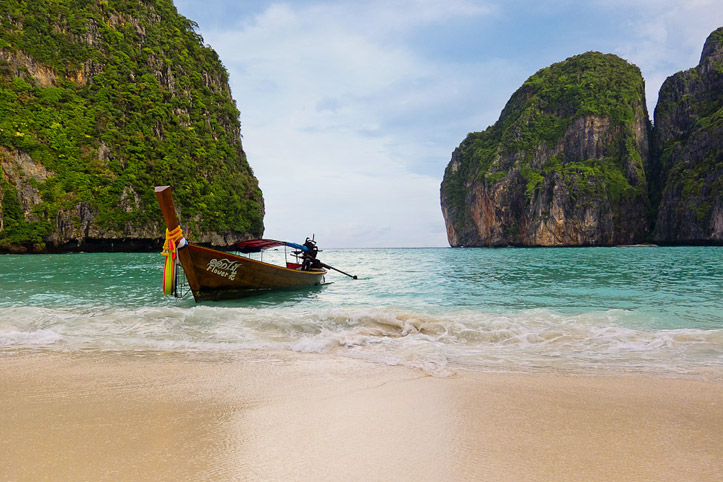 As a friend of mine pointed out, it’s such a shame that SO many people can quickly make you want to leave one of the most beautiful places on earth – but I’m happy, I saw it, felt it and experienced it without the masses, even if only for a brief moment in time!
So, tourists “in pursuit” (it turns out they all follow around the island pretty quickly after hitting Maya Bay), we got out of there and headed to Sama Bay on the other side of the island for a quick look around.  It’s SO shameful that a place this perfect is actually littered with trash now.  Not on the beach itself, but in the forest areas – tons and tons of plastics, waste, bottles, the works – the tourists really have ruined what was once a paradise.
Sensing this, Tun decided to take us to “Pi Leh” to swim in an unspoiled lagoon.  WOW, that made the trip even more worth it.  Bright, clear, water, so warm it was like a bath, and not a soul there to race against or ruin it for us.  From here, you could also really see the effect of the sea with the undercut of limestone over thousands of years.

And that was nearly it.   Just time to take a quick look at “Viking Cave” on the way home – along with a quick stop for Tun and Keiko at a private beach before looking back at Phi Phi Leh from a distance.

It really is an incredible place, and the fact it remains virtually uninhabited is at least helping to keep it that way.  That said, we, as tourists, really do seem to be trying to trash the island – my only hope is that it stays as beautiful as when I saw it this week for many more years to come, despite the human impact we’re so clearly having. 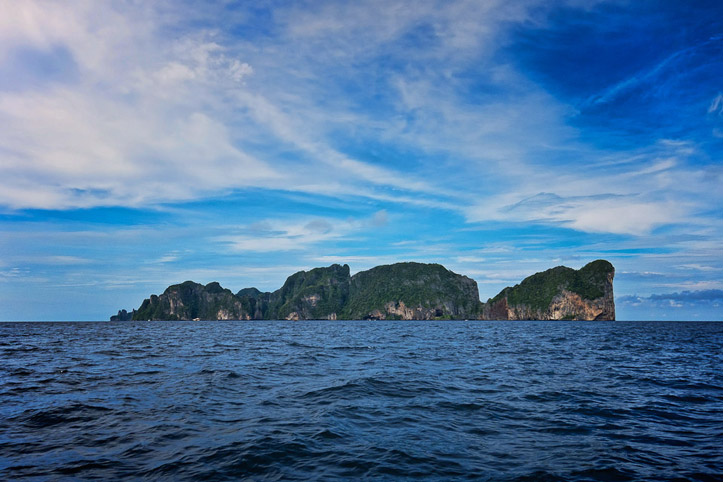 Next up, I REALLY have to get uploading some of my Bangkok and Koh Samui images soon – there are a few nice ones in that set too 🙂