Yesterday, Chuck and I headed to Joshua Tree National Park just before sunset to see if the light would play nice and allow me to capture some cool colours against all the rocks and landscapes in the park.  Although we got there a little later than planned, I got to use my ND filter for the first time since the summer, and the sky didn’t disappoint…

First off, where is it?  Well – here’s a good site for a start – it’s right along the side of Interstate 10 in California, bordering the Desert cities. 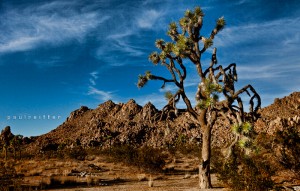 While *technically* just up the road from where we are, it’s still a 1.5 hour drive in either direction to get to the middle of the park and we drove in through the western entrance.  Getting there just before sunset meant a lot of the shadows were already forming long lines across the rocks as it drops quite rapidly, so exploring was mostly a case of running to catch the light!  First picture of the trip?  A Joshua Tree, of course – it looks like a cross between a palm tree and a cactus, and one that I don’t fancy the prospect of landing on…

Further into the park, and you hit the “Hidden Valley” (which is signposted well to ensure it’s not *that* hidden….!)  On a one-mile loop, you enter a park of huge rock formations which are lit through a tiny gap as the sun goes down.  And then, we realised the problem. Time was way too tight, and we needed to get high, quickly – it was nearly 4pm and despite sunset being at 4:34, we were hidden by a mountain range – one that we needed to get on the top of in order to see the sunset.

Hurrying back to the car, I nearly missed one shot that I would have regretted for a long time.  Someone once told me – “50% of the world is behind you” and they were entirely correct.  We’d been so focused on looking at Hidden Valley, we hadn’t seen the “blatantly obvious valley” that we’d left behind in the car.  Anyway, I’m glad I stopped to grab this one…!

So, that’s one of my favourite pictures of the year so far…!  With that in the bag, it was back in the car to the race up the hill for sunset.  Sunset’s weird when the sun is disappearing behind a mountain – coming from Weymouth, by the sea, means I normally see the sun on the horizon with all the colours it produces reflecting across the water – this was very different.

At first I thought “hmmm – it’s not as good” as the sun disappeared behind the San Jacinto mountains. without any of the colours I was expecting from a sunset and the haze in the valley made it difficult to capture.  But then I realised…  The sun was bouncing off the atmosphere, and the haze, to produce a very different set of colours all through the valley floor.  The shot above is of the Salton Sea, which I’ve visited before – with the hills of the park in the foreground and the desert cities to the right.  The reds and oranges were amazing up there, all caused by the reflections from the sunlight as it dipped behind the mountain. 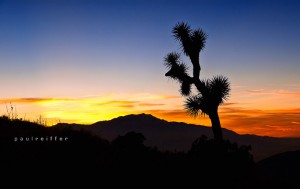 The sunset itself?  Pretty boring, actually – I have to say.  (Sorry Chuck!).  Despite it being 32F up there and nearly losing a finger to the cold winds, once it disappeared behind the mountain there wasn’t much to look at.  Walking down towards the car, I did manage to capture the one Joshua Tree that stands at the peak of Key View against the mountain sunset. 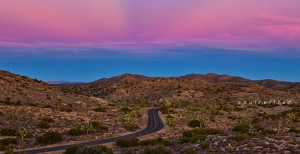 Back in the car, this was the view as you looked away from the sun.  The amount of light reflected  back into the park is quite incredible – it actually stayed “light” for the next hour or so after sunset as a result.  This shot actually has a graduated ND filter on it, but the colours were literally this vivid – and all after sunset!

So there we have it – this was the last sunlight we then saw for the next 1.5 hours of driving.  Through the park, you then pass the Jumbo Rocks and other campgrounds but sadly, there just wasn’t enough light to capture the rest of it.  But then, maybe it’s a good idea to leave a few things to shoot next time…