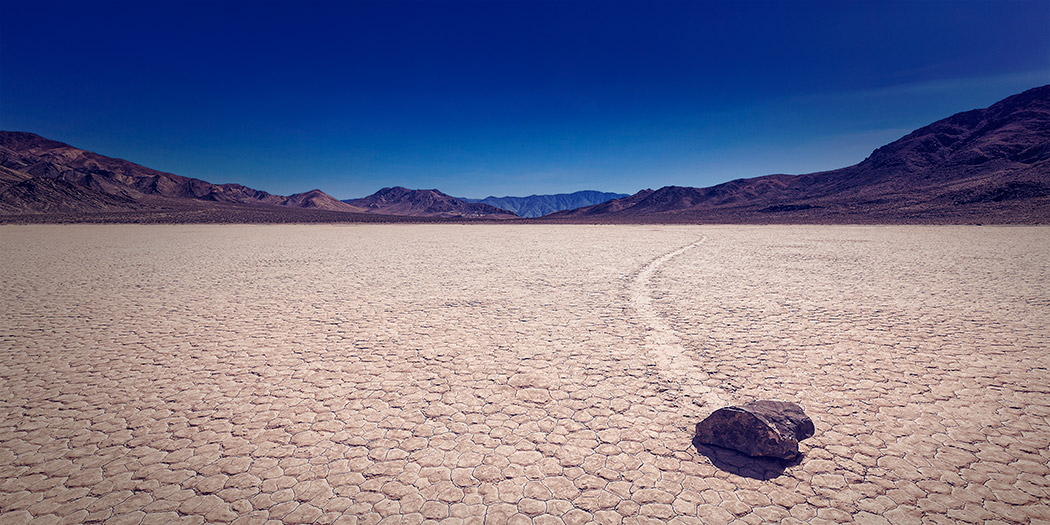 In 2011, I managed to capture another shot of Devil’s Golf Course in Death Valley. Having visited many times before, each time being stunned by the scenery this National Park has to offer (along with the 120 degree heat some days!), it dawned on me that there was one area that I’d never quite managed to reach : The Racetrack Playa.

The place still remains as mysterious to scientists as ever – and nobody can 100% quite describe the reasons behind the movement of rocks around the nearly 4 square miles of desert surface that makes this part of California look like another planet. From Google Maps, it looks like a small crater of flat sand in amongst an array of coloured mountains. In reality, this place is a lot more painful to reach…

By complete co-incidence, I met with a friend Artur in San Francisco at the end of 2011, who was telling me of the fun he was now having in his new Jeep – “we can get to the Racetrack as easily as you can drive on the freeway”. 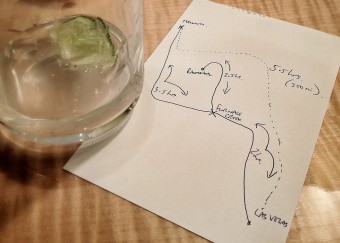 So, I booked one for the summer and the next thing I know, I’m in Las Vegas collecting my rental car.

And then I asked the dangerous question – “this 4×4 is OK to get to the Racetrack, right?”.

The agent’s eyes widened : “The 4×4 is Sir, of course. Your insurance, however, is definitely not.”

And that’s where the power of the Internet came to the rescue 🙂 A quick search around to see how people had got on with the “washboard” surface in rental 4x4s revealed that the risk just wasn’t worth it. Breakdown cover won’t actually cover you, nor will any damage waivers for the car. I needed a plan B, and fast (we were heading there the next morning). That’s when I stumbled upon Farabee’s Jeep Rentals – a lifesaver in Furnace Creek! A quick call, and we set out to meet them in our, rather redundant, rental 4×4.

On arrival into Furnace Creek, a lot more made sense. The Racetrack is actually down a pretty much one-way road (no loop), 1.5 hours of HARD washboard driving in, and 1.5 hours back, no cellphone coverage, no real “traffic” passing by – plus the time it takes to get to Ubehebe Crater in the first place in 120 degree heat where the trail begins. 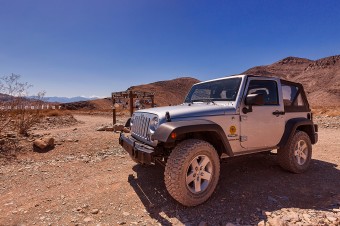 The guys at Farabee’s were amazing. With an ice box of water and supplies pre-loaded in the car, emergency radios, really detailed instructions and some driving tips that came in really handy – we set off and got to Teakettle Junction in no time 🙂

On the map, I was wondering what was behind the name – on arrival, it was pretty obvious…! We knew we were nearly there, but the constant drone of the surface of the ground (and rather boat-like driving technique I’d managed to adopt) meant we needed to take a break for a few minutes.

A family of 5 inside a standard rental car went driving by into the playa looking rather shook-up and unhappy. Good decision on the jeep, well made, from the look on their faces 🙂 Now, I can’t lie – when we got to the part on our directions which said you are here, I did say out loud “is that it?!” but headed out to find the rocks anyway.

There are two sections of the playa – the part pictured above which features the “Grandstand”, a huge rock formation which punches through the surface in the the middle of the playa – and an area further south with a lot more rock-based racing activity. From all the effects that I’ve seen on other photographs as well as the way the playa is talked up, I had imagined huge boulders and massive moonscape surfaces to trek across. That’s not quite what we got. The rocks are somewhat smaller than even my own pictures make out (hint : they’re shot from about 6 inches away with a super-wide lens to give a huge feeling of perspective). The surface is actually small “bumps” which, given the correct angle of the sun, show the trail the rocks have made – but from a distance doesn’t actually show much of a marking from the path it took.

What was good, however, is that we’d made it down there in the mid-afternoon – so the shadows were starting to form. Many of the images I’ve seen online have been manipulated to such an extent the Racetrack looks almost black and white, with harsh tones, but that’s not what you see when you’re there. The yellowish hard “mud” warms up the images I was taking, and the perfectly clear blue sky gave an amazing colour to the top part of the images.

Using such a wide lens up-close to the rocks does have its disadvantages : the distortion towards the bottom corners of the images is apparent (and the surface pattern only amplifies that) but I have to admit – despite knowing that I had to use a trick of perspective to get the shots “looking right”, the whole place is still pretty impressive if you think about it. 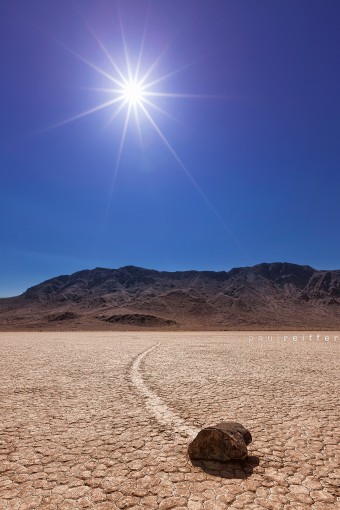 Hidden away, deep in one of the hottest and dramatic landscapes in the USA is an area of land where rocks literally move themselves. Some say it’s wind; others believe it’s when water arrives; to some, it’s the magnetic pull of the earth. All I know is, having stood next to them, they’re certainly not man-made tracks.

And then, sadly, we came across evidence of people ruining the amazement for others. Despite several warnings all around on the guide books, leaflets and signs at the edge of the Playa – many tourists have decided to ignore the request to stay off the surface when it’s wet and have left footprints in the sandy mud, which I guess will last almost as many years as the tracks behind the rocks. Nearby were also tire tracks of cars that had clearly been driving on the surface too.

That, and the huge number of cigarette ends that were scattered around the area just reminded me that at the end of the day: We really do take advantage of some of the amazing scenery the world has to offer, and in some cases, contribute to its demise. 🙁

Anyway, back in the jeep for another few hours of head-banging (and sadly not the musical kind) and we made it back to Furnace creek to return the jeep. All in all, a great visit – I’m glad I got to see the racetrack, despite the rather diminutive size of the rocks in comparison to my expectation! On the way back, we stopped at one of my favourite places of the park – the Stovepipe Wells sand dunes. Death Valley is full of surprises when it comes to different light throughout the day and the dunes, salt lakes and coloured mountains just give me more and more reason to return there to see them again.

This time around, I managed to shoot the dunes at sunset, but my favourite photo of the dunes that day wasn’t what I expected to capture. As I was taking images of the golden sand as it started to turn red, I noticed a shadow of a man on top of a hill moving up the dune I was on. 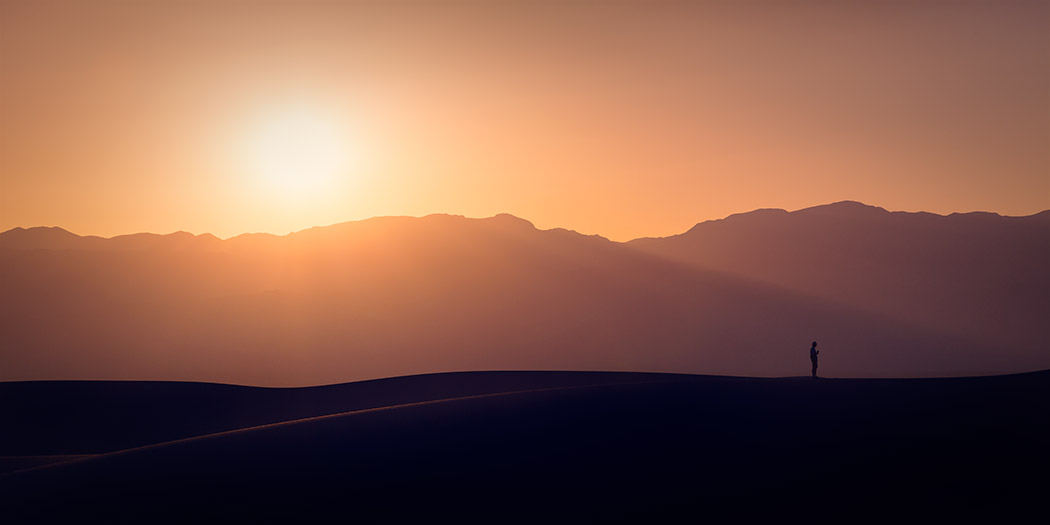 A quick look to my left, and I got a shot that for some reason that I can’t quite explain, I just love : a guy simply drinking his coffee on top of a mountain of sand in 120 degrees as the sun set behind him 🙂