Since moving to China, I’d looked at the best time to go and photograph the Great Wall (or the sections near Beijing, anyway) – and no time seemed perfect. Winter is VERY cold up there, summer is too hot (and covered with people sleeping on the wall) and while autumn is a great time for colour, the early sunrise along with massive crowds makes it difficult to get a comfortable and clear shot. I settled on December, with a plan to see a few more sights as well…

Landing late at night isn’t that fun when a) you’re on (in my opinion) one of the worst airlines in the world – China Eastern – and b) you know you have a 3:30am start the next day! With sunrise still quite early in Beijing due to the whole of China being on just one timezone, we had no choice but to meet our guide in the freezing cold, red-bulled-up (Chinese Red Bull isn’t that great!) and head through the darkness to the Mutianyu section of the Great Wall of China – it was covered in ice and snow – perfect for a cool shoot.

Sadly, that was the point when things started going wrong…

First, the “inside contact” our guide claimed to have didn’t materialise – meaning instead of having the cable car running before the wall opened, they told her (and us) to go away and leave them alone. The wall, at this section at least, is such a tourist attraction that it has entrance gates, turnstiles, ticket counters and is actually “closed” outside of attraction times – I thought that was it, game over. Our guide knocked the huge red wooden gates (enough to wake the entire mountain) and some poor half-asleep worker came to usher us through a gap on the promise we’d buy a ticket on the way down 🙂

Then the second blow : I know I’m unfit these days, but WOW – the hike to towers 7 and 8 is about 2km up steep paths, ice-covered steps, and we were only about 45 minutes from sunrise. Ironically, that wasn’t actually a problem. What was an issue, however, was that less than 150m into the “climb” our guide collapsed, unable to breath and throwing up. Great… So, decision time : our guide had a car 150m down the hill, we didn’t. We’d flown and stayed in Beijing purely to get some images of the wall, she hadn’t. Right – we agreed with her that she should stay behind and asked for the directions to where we needed to be for the shots : she didn’t know.  It turns out she’d only ever done it on the cable car! “Screw this” was the phrase, and we started hiking up the hill.

We just made it in time – and managed to grab the sunrise as it happened.

“Over The Wall” – Print available to buy now

Sadly, the clear sky in which we had arrived had given way to clouds, but I’m not disappointed with the shots. I would have liked less cloud (or smog…!) around the sun itself, but the mist hanging over the mountain side adds some atmosphere that I like. The “dot” of the sun makes it look like it’s been dropped into a pool of cloud and the higher-res version actually has a lovely gradient to the orange light that surrounds it. 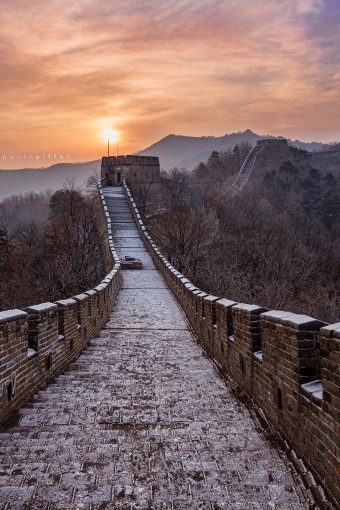 Frustratingly, having carried my metal tripod the whole way in the freezing cold (resulting in fingers which didn’t work too well for taking photos, even with hand warmers!) it turned out to be useless for the angle of shot I needed through the cut-outs of the wall itself. Not to worry though, as at 20mm, a 40 second exposure is do-able even handheld 🙂

Walking back down towards where we started (we’d ran to the position of the sunrise picture to make it in time), I had a bit more time to relax and shoot some in-depth shots of what the wall looks like when on it. The top photo of this post was actually taken from the tower you can see in the photo to the right, as the sky was lit up by the sun behind us.

This, however, is when my disappointment started to set in. You see, the “awe-inspiring” element of the wall is its size. The “fact” that it can be seen from space turned out to be a marketing myth a long time ago, but given when it was built and how huge it is, it’s an impressive sight to see.

But you can’t see the whole wall – only the part you’re stood on – and there are so many parts (each with their own unique elements) that one picture cannot possibly capture it all. I’m pleased we got up there (especially with the earlier screw-ups) and I’m happy that I not only got to see it at sunrise but also captured some nice views of the morning with nobody else there, but I’m not sure it’s the photographic marvel that I set myself up to expect.

Moving on, we headed back down to our sick guide – who was feeling much better now and had purchased tickets to make us feel better about “breaking in”. 🙂 Other walkers, thinking they’d be first up, were puzzled as we passed them half way down and with the cloud setting in thick and fast by that point, I was pleased we made the effort to get there when we did. Then it was back to Beijing to rest for the day before heading to the Olympic Park (remember the famous Beijing National “Bird’s Nest Stadium“?) which allowed me to get this shot of it with the “Ice Cube” aquatics centre in the background:

The next morning we decided to drop the guide (I’m pretty comfortable finding my way around) and despite Beijing’s rather useless concentric-circle-based subway system, we made use of the spare/backup day to see some more of what the city had to offer.

The Forbidden City, while impressive, for me didn’t have a patch on some of the Thai temples I’ve seen over the years when you consider the content of the temples within – but its the size of the place which, again, gets you. At 1km x 750m and opposite Tiananmen Square, it’s a massive cut-out of the middle of Beijing. The standard tourist shots of the gate are fine, but I love this view from the north-eastern corner as we left the compound. To get a true feeling of the size of the place, however, you need to head to Jingshan Park (or “Coal Hill” as it’s referred to locally). From up on the hill, you can see how impressive the cut-out really is, surrounded by a lake with entrance gates on each aspect across bridges for security: 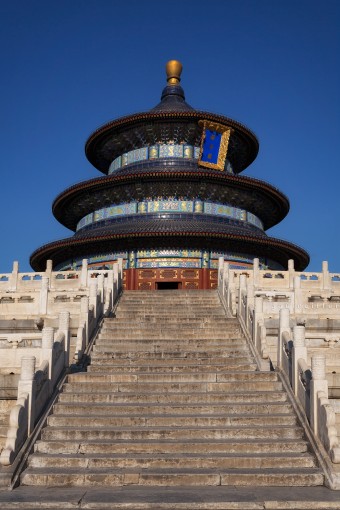 Finally, we headed to the Temple of Heaven – south of the city centre.

Clearly a huge Chinese tourist-trap, this place has lights set up for concerts, shows, and (presumably) effects to be added on the outside of all of the buildings at night. Again, having seen some of the amazing temples and statues around Thailand, this didn’t quite “hit the spot” for me, photographically, so I just shot this rather bland image of the main “Hall of Prayer for Good Harvests”.

In all honesty, I found a lot of Beijing disappointing. Not because Beijing did anything “wrong” as such, and I’m really happy that I had the opportunity to shoot the Great Wall of China while I’m here, but compared to Shanghai, the place just didn’t “click” with me.

Maybe I built it up too much in my own mind before we got there – perhaps I was expecting way too much. But the smog, the constant rip-off taxi drivers (who, warning, won’t use a meter for tourists!) and the overall flat feeling I got about the place make it not a place I’d look forward to returning. For temples; Thailand (in my experience) beats it. For “landscapes”; I’ve shot areas I prefer many times over the Great Wall.  For a place to spend time/vacation; it’s just not my cup of tea – not even the Peking Duck impressed me in comparison to what I’ve eaten “back home”.

Time to make more of Shanghai, I guess… 😉